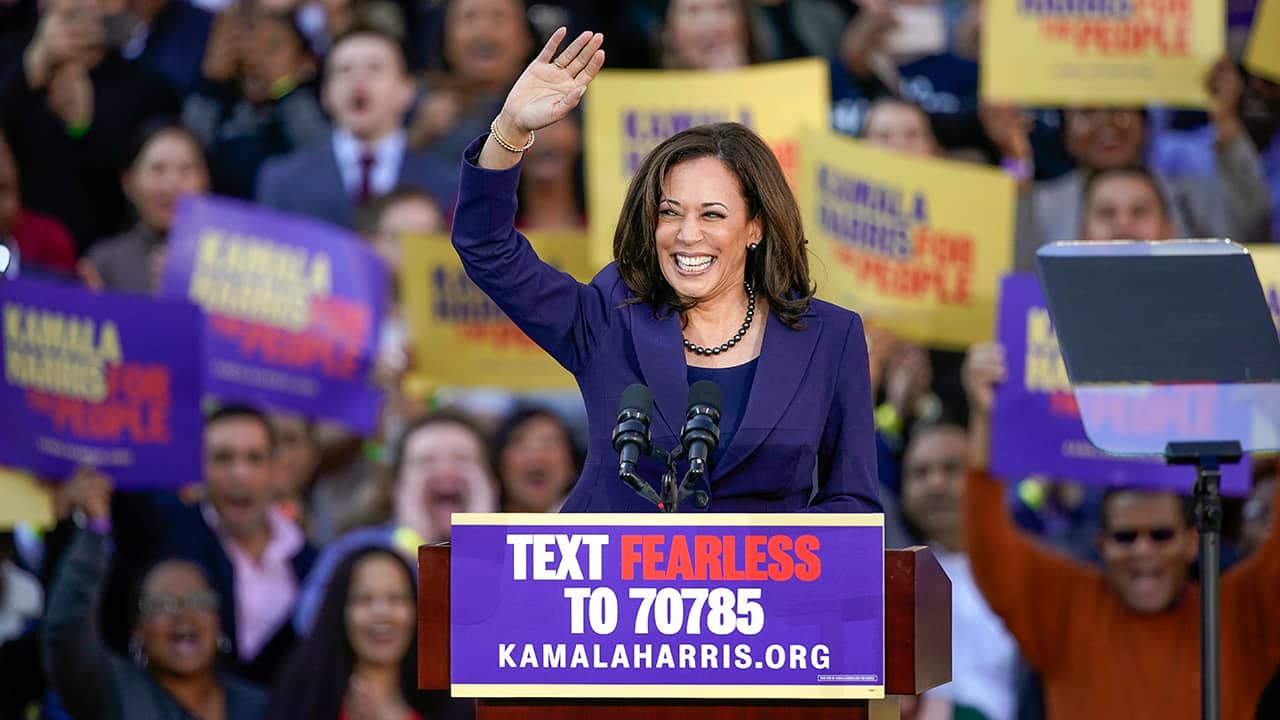 OAKLAND — Democratic Sen. Kamala Harris, standing outside of Oakland’s city hall, formally kicked off her campaign for the White House by presenting herself as the leader who can best unite an America that is at an “inflection point” and facing a critical question.

Harris’ campaign is filled with historic possibility. If she ultimately wins the White House she would be the first African-American woman and first person of Asian descent to be president.
Harris, the daughter of immigrants from Jamaica and India, said that as she and her sister, Maya Harris, grew up in the East Bay they were “raised by a community with a deep belief in the promise of our country, and a deep understanding of the parts of that promise that still remain unfulfilled.”

She has attributed her decision to become a lawyer and a prosecutor to her upbringing, and said Sunday that she and her sister were “raised to believe that public service is a noble cause and the fight for justice is everyone’s responsibility.”
She said she is running “with faith in God, with fidelity to country, and with the fighting spirit I got from my mother.”
Harris’s launch has drawn heavily on symbolism. She officially entered the race on Martin Luther King Jr. Day. Campaign aides say she has drawn inspiration from Shirley Chisholm, a New York congresswoman who in 1972 became the first black woman to run for president from a major party.
Harris’ first news conference as a candidate was on the campus of Howard University, the historically black college in the nation’s capital that she attended as an undergraduate. On Friday, she was in South Carolina to speak to members of the Alpha Kappa Alpha sorority, of which she is a member. Other members of the group, wearing traditional pink and green, were on hand at Sunday’s rally.

Harris’ Campaign Is Expected to Highlight Her Career as a Prosecutor

Her choice of Oakland for her campaign launch was both biographical and symbolic. The state of California has played a leading role in resistance to the presidency of Donald Trump. And Oakland itself, where she was born and spent her formative years, has a history of activism. The plaza outside City Hall where Harris spoke once housed Occupy Oakland’s encampment. When Barack Obama ran for president in 2008, he picked the site for his first Bay Area campaign event.
Michael Ahrens, a spokesman for the Republican National Committee, called it “fitting” that Harris chose “the most liberal district in deep-blue California to launch her campaign.”

Harris’s Campaign Will Be Based in Baltimore

Harris is among the first major Democrats to jump into what is expected to be a crowded 2020 presidential contest.
Sens. Elizabeth Warren of Massachusetts and Kirsten Gillibrand of New York have announced exploratory committees. Former Maryland Rep. John Delaney and Julian Castro, federal housing chief under President Barack Obama and a former San Antonio mayor, already are in the race.

Sens. Cory Booker of New Jersey, Sherrod Brown of Ohio, Amy Klobuchar of Minnesota and Bernie Sanders of Vermont may also run.
After the rally, Harris planned to her first trip to Iowa as a presidential candidate. In the weeks before last November’s elections, she traveled to the leadoff caucus state to campaign on behalf of Democrats, and also visited other early-voting states.
Harris’s campaign will be based in Baltimore and led by Juan Rodriguez, who managed her 2016 Senate campaign. Aides say the campaign will have a second office in Oakland.
Related Topics:American DreamCaliforniaOaklandpresidential campaignSen. Kamala HarrisWhite House
Up Next