OGDEN, Utah — Federal workers received pay stubs Friday with nothing but zeroes on them as the effects of the government shutdown hit home, deepening anxieties about mortgage payments and unpaid bills.

All told, an estimated 800,000 government employees missed their paychecks for the first time since the shutdown began three weeks ago.

Fuming employees posted pictures of the $0 pay stubs on Twitter and vented their frustration as the standoff entered its 21st day. This weekend, it will become the longest shutdown in U.S. history.

Here is one such stub from Oscar Murillo, who is a NASA engineer.

I just got my paystub, it was $0 (-$130 actually to account for mandatory deductions). However, my Senator @KamalaHarris is on a book tour charging $40 per seat. #ShutdownStory #DoYourJob https://t.co/DTmJo3Hfgu pic.twitter.com/VwGGwfpgqA

Some Democratic lawmakers seized on the empty pay stubs as a way to renew criticism of President Donald Trump, who triggered the shutdown over his demands for funding for a border wall.

Sen. Tim Kaine of Virginia tweeted: “It should be payday for hundreds of thousands of federal workers. But thanks to Trump, many are actually getting pay stubs like this. He’s treating them like the countless contractors he stiffed throughout his business career.”

Sen. Tom Udall of New Mexico tweeted a stub that he said was from an air traffic controller. “Holding livelihoods hostage isn’t getting us anywhere,” Udall said.

This is a pay stub for an air traffic controller, as reported by @POLITICO.

$0. That’s how much @POTUS values the work these controllers do to keep us safe.

On Thursday, Rep. TJ Cox (D-Fresno) used the impact of the shutdown as the topic of his first speech from the floor of the House of Representatives.

“We say that we are a nation that values work and workers,” Cox said from the well of the chamber. “But today we are demanding that thousands of working men and women work without pay because our colleagues in the Senate and the White House won’t do their jobs.”

Roughly 420,000 federal employees were deemed essential and are working unpaid. An additional 380,000 are staying home without pay. While furloughed federal workers have been given back pay in previous shutdowns, there is no guarantee that will happen this time.

Government contractors, who have been placed indefinitely on unpaid leave, don’t get compensated for lost hours.

The typical federal employee makes $37 an hour, which translates into $1,480 a week, according to Labor Department data. That’s nearly $1.2 billion in lost pay each week, when multiplied by 800,000 federal workers.

Many workers live paycheck to paycheck, despite the strong economy and the ultra-low unemployment rate, and would struggle if their wages or salaries were interrupted. A Federal Reserve survey in May found that 40 percent of Americans would have to borrow or sell something to make a $400 emergency payment.

Government workers are scaling back spending, canceling trips, applying for unemployment benefits and taking out loans to stay afloat. Some are trying to land second jobs.

Rachael Weatherly, a senior adviser for the Federal Emergency Management Agency, said she is considering trying to get a job at a grocery store. Weatherly, a Maryland resident and mother of two young children, said a recent separation from her spouse drained her bank account, and she is just beginning to re-establish her savings. She cannot afford to miss one paycheck.

“I filed for unemployment. I’m waiting for that to come through,” she said.

Weatherly said her daycare provider agreed to defer payments, as did her mortgage company. But she still worries any late mortgage payments could harm her credit score. The uncertainty, she said, is heightening her concerns.

“I just don’t see how this is going to end,” she said.

For those looking for second jobs, however, opportunities seem plentiful. There are more open jobs than there are unemployed workers, according to Labor Department data. Employers posted 6.9 million jobs in November, the latest figures available. 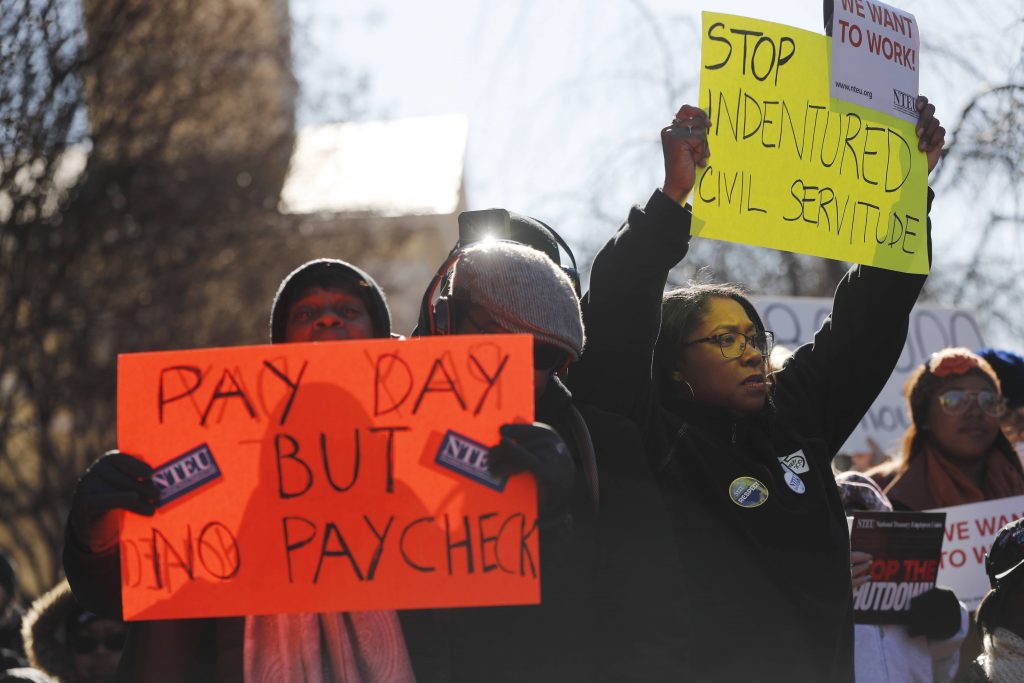 Union members and other federal employees rally to call for an end to the partial government shutdown, Thursday, Jan. 10, 2019 at AFL-CIO Headquarters in Washington. (AP Photo/Pablo Martinez Monsivais)

But Tiauna Guerra, one of 3,750 furloughed IRS workers in Ogden, Utah, said employers don’t want to hire her when she explains her situation because they don’t want to lose her in a few weeks.

In the meantime, she is taking out a loan to make her car payment, and she and her husband are delaying plans to move out of her parents’ house until the shutdown ends.

“We’re barely getting by,” said Guerra, a mother of two small children. “We are not able to pay a lot of our bills. We’re having a hard time trying to buy gas, food.”

Guerra was among about 100 furloughed IRS employees who rallied Thursday outside the federal building in Ogden to call for an end to the shutdown. They chanted, “We want to work, we want to work.”

Most of the government workers received their last paycheck two weeks ago. Around the country, some workers are relying on donations, including launching GoFundMe campaigns. Food pantries have opened up in several locations.

Group Steps Up for Employees at Coast Guard Stations

In Massachusetts, a private group has stepped up to ensure that those working at local Coast Guard stations have access to food and clothing during the shutdown. Don Cox, president of the Massachusetts Military Support Foundation, said the nonprofit group has opened up what he calls “empowerment centers” at Coast Guard stations in Boston and Providence, Rhode Island.

The group is helping feed 500 to 600 families a day during the shutdown, about double the typical demand, Cox said. He said he is angry that those working on some military bases aren’t getting paid.

“We’ve been doing this for 10 years. This is my fourth shutdown,” Cox said. “I wish the senators and the congressmen weren’t taking their paychecks. I’d feel a lot better then.”

Democratic Rep. Diana DeGette of Colorado said she would not take her paycheck as long as federal workers were unpaid. Rep. Ed Perlmutter, another Colorado Democrat, said his staff would offer free breakfasts and lunches to unpaid federal workers at his district office in suburban Denver starting Friday.

In Falls Church, Virginia, outside Washington, a school district is planning a hiring fair for furloughed federal employees interested in working as substitute teachers.