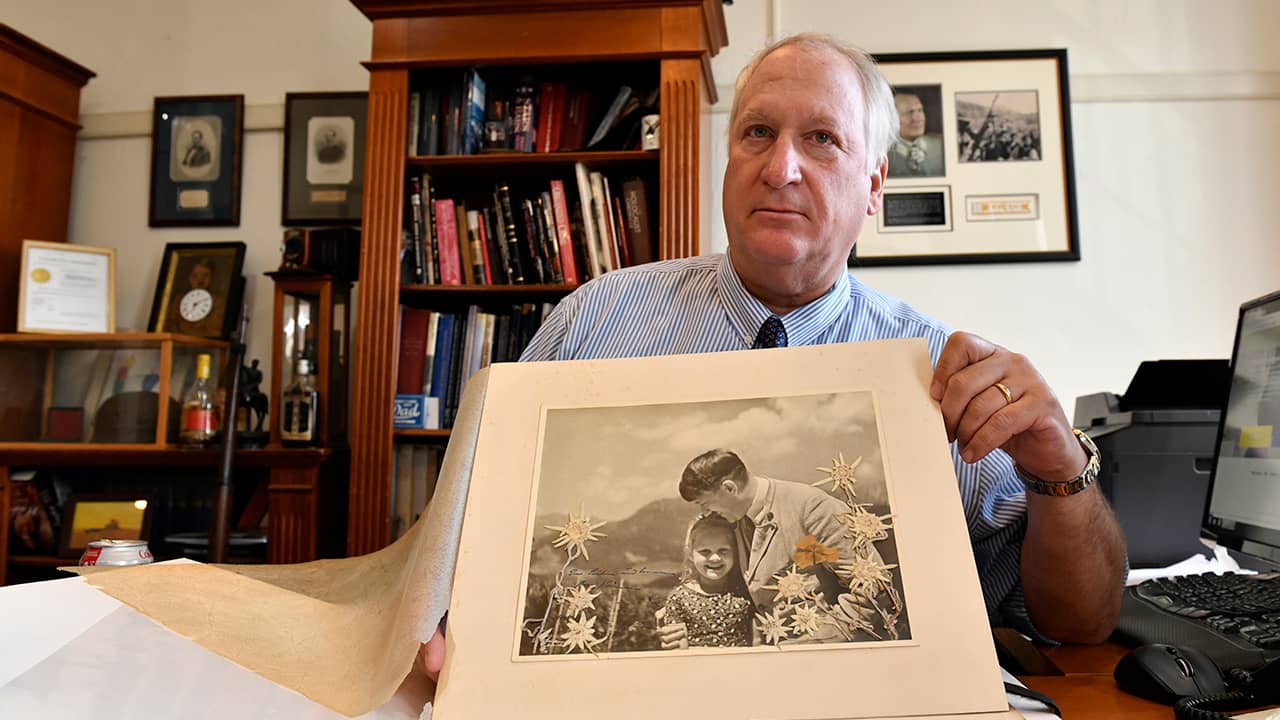 He has auctioned the journals of Nazi death camp doctor Josef Mengele for $300,000, Adolf Hitler’s telephone from the Führerbunker for $243,000 and Hitler’s ring featuring a swastika made of 16 rubies for more than $65,000. And just before Thanksgiving, a Hitler-inscribed propaganda photograph that shows the architect of the Holocaust hugging a German girl of Jewish heritage went for more than $11,000.

Many Jewish Groups Have Denounced These Sales A book by photographer Heinrich Hoffmann was among items sold along by Alexander Historical Auctions in Chesapeake City, Maryland. (Photo for The Washington Post by Eileen Blass)

Many Jewish groups, though not all, have denounced these sales.
Haim Gertner, the archives director of Yad Vashem, Israel’s leading Holocaust memorial, said some of Hitler’s personal items are worth saving, especially if the owners of Nazi artifacts believe that the material and anti-Semitic history should never be forgotten. But selling these artifacts to the highest bidder, he said, “is incorrect and even immoral.”
Rabbi Marvin Hier, founder of the Simon Wiesenthal Center in Los Angeles, said some Hitler or Nazi party documents or objects should be preserved, particularly their writings revealing their murderous aims. But he said other Nazi memorabilia – much of which were smuggled out of Germany by American service members – merely inflate the dictator’s mystique and embolden anti-Semites.
“The Hitler salute is coming back in this country, and bigots get their nourishment from seeing things like this photo and the girl,” Hier said. “People will see that photo and say, ‘Maybe Hitler had a good side to him’ and ‘Don’t judge him so badly.’ ”
But Panagopulos, 60, whose auction house is based about 100 miles northeast of Washington, D.C., said the market is being driven by World War II movies, documentaries and endless segments on the History Channel, once derided as “The Hitler Channel.” Many buyers of the expensive, headline-generating Nazi memorabilia are Jewish.
One of them is Michael Bulmash, 74, a retired Jewish clinical psychologist from Delaware. He has spent the last two decades buying Holocaust material, a sizable portion from Alexander Historical Auctions. He has donated everything – including children’s books published by the anti-Semitic publisher Julius Streicher and an old back issue of Streicher’s newspaper, Der Stürmer – to his alma mater, Kenyon College in Ohio, for the Bulmash Family Holocaust Collection.
“It’s all about getting this stuff out in people’s faces,” Bulmash said, “especially when you had neo-Nazis marching in Charlottesville and the president of the United States creating a false equivalence between what neo-Nazis were doing and what the people who were trying to stop them were doing.”

His Wife and Adult Children Do Not Approve or Understand

Another Panagopulos client, Howard Cohen, 68, a retired Jewish optometrist in Pittsburgh, keeps all kinds of “anti-Semitica” from Nazi Germany in his home, including a Der Stürmer ashtray featuring a caricature of a hooknosed Jew he got for about $2,000. He hides the material in drawers or boxes, so no houseguest would ever see them. His wife and adult children do not necessarily approve or understand, he said. “I sympathize with their revulsion regarding the apparent profit from this journal,” Blumenthal said in a statement at the time.
Spokespersons for Blumenthal and the Holocaust survivors group said they do not recall whether a probe was ever launched. Panagopulos said Blumenthal, now a Democratic senator from Connecticut, never contacted him.
A year later, he sold the remainder of Mengele’s journals, for $300,000. The buyer was also a Jew, Panagopulos said. But the sale still generated a backlash.
“If you really want to despise someone, look no further than Stamford, Conn., where you can find Basil (Bill) Panagopulos who runs Alexander Historical Auctions,” began an op-ed in the New York Daily News by an American Gathering executive.
Undeterred, Panagopulos continued selling all manner of paraphernalia: a cache of medical documents showing the führer suffered from flatulence and was injected with an extract of bull testicles to jump-start his libido; an archive of letters, poetry and school papers of Nazi propaganda chief Joseph Goebbels; and a U.S. Army interrogator’s notes of his interview with Hitler’s doctors that revealed Hitler took female hormones.
In 2014, after Panagopulos moved the auction house to Chesapeake City, Maryland, he sold perhaps his grisliest item: a bloodstained scrap of fabric from the sofa where Hitler shot himself on April 30, 1945. The winning bid: $18,000. He kept another piece for himself but does not display it.

Many Others Who Deal in Nazi Material Are More Secretive

“Strange, isn’t it? Why would someone keep this?” he asked, clutching the cloth. “But what a rarity!”
Although Panagopulos is a proud spokesman for his trade, many others who deal in Nazi material are far more secretive.
Case in point: both the consignor and the buyer of the photo showing Hitler hugging Rosa Bernile Nienau, a girl of Jewish descent. Hitler’s close friend Heinrich Hoffman photographed Hitler with many children and made multiple prints of the same photos, which were widely distributed across Germany. But Hitler liked Nienau so much – they shared the same birthday, April 20 – that she earned the moniker “the Führer’s child” and she called him “Uncle Hitler.”
As is custom in the auction world, Panagopulos declined to reveal the identities of his clients. At The Washington Post’s request, Panagopulos asked the top bidder of the photo, who lives in Britain, for an interview, but the winner never responded to his request. The photo’s consignor declined via Panagopulos to comment.
When The Post reached Don Boyle of Scranton, Pennsylvania, a well-known collector of World War II German artifacts, he said he had once owned the photo and traded it in 2007 to Arizona collector Jeff Clark, who runs a website that sells Nazi party uniforms.
It was Clark who consigned the photo to Panagopulos, Boyle said.

Chronicling the Area’s Ties to the Nazi Party A souvenir print depicts the Berghof, Adolf Hitler’s mountain retreat at Berchtesgaden. The item is shown in November 2018 at Alexander Historical Auctions in Chesapeake City, Maryland. (Photo for The Washington Post by Eileen Blass)

In an email, Clark denied knowing about the photograph, let alone selling it. “I had to [G]oogle to find out what you were talking about,” he wrote.
The sale of the photo was covered by news outlets worldwide. One Amsterdam-based journalist questioned the authenticity of Hitler’s inscription: “The dear and [considerate?] Rosa Nienau Adolf Hitler Munich, the 16th June 1933.”
“[C]ounterfeit Nazi junk,” declared Bart FM Droog, who is working on a book about fake Hitler artifacts.
Elaine Quigley, who chairs the British Institute of Graphologists, said the photo’s inscription matches with some of Hitler’s earlier known handwriting, especially his autograph.
Panagopulos said the photo was consigned with multiple supporting documents and the original envelope, featuring the blind-embossed (inkless) stamp of Hoffman’s studio, in which it was delivered to the Nienau family.
Shortly after the auction, Panagopulos said, he got word from the Dokumentation Obersalzberg in Germany, a government-funded museum chronicling the area’s ties to the Nazi party, that it wants to put a copy of the photograph in a permanent exhibit.
“I’ve seen hundreds of Hitler autographs. I am confident in the signature,” Panagopulos said. “And if I’m wrong? I’m on the hook in perpetuity. We offer a one hundred percent warranty of authenticity.”
Related Topics:Artifactsauctionbacklashdeath campFührerbunkerNazi
Up Next