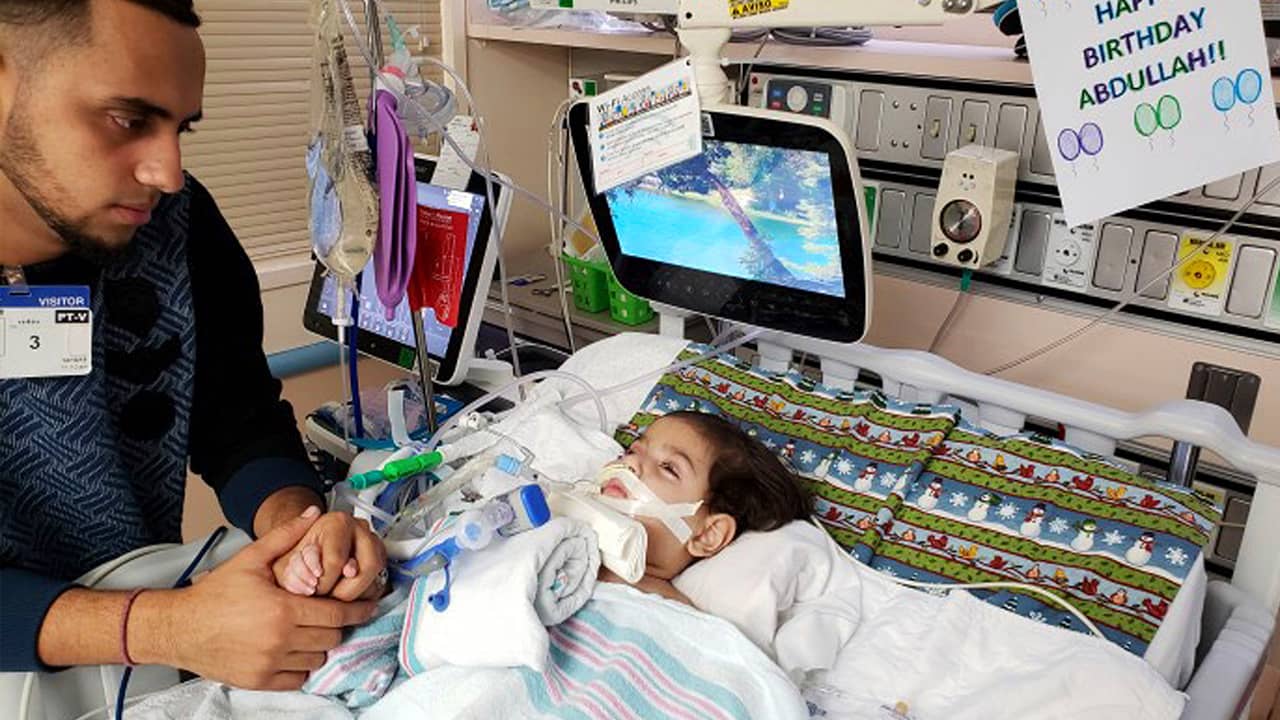 SAN FRANCISCO — A Yemeni mother cradled her 2-year-old son in her lap, pressing her face close to his and clasping his hand as a series of tubes kept his small body alive.
Shaima Swileh touched the boy for the first time since winning a more than yearlong legal battle to overcome the Trump administration’s travel ban and enter the U.S. to say goodbye to her dying child.
A photograph released late Wednesday by the Council on American-Islamic Relations shows Swileh holding her son Abdullah at a hospital in Oakland where he is on life support. Swileh arrived that night at San Francisco International Airport after the advocacy group sued the U.S. to grant her waiver from the travel ban. She got it after a 17-month fight.
Swileh, wearing dark glasses and a white headscarf, was mobbed by friends and reporters at the airport.
“This is a difficult time for our family, but we are blessed to be together,” the boy’s father, Ali Hassan, said at the airport, asking for privacy.

The couple was driven to see their son at UCSF Benioff Children’s Hospital in Oakland, where Hassan brought Abdullah in the fall to get treatment for a genetic brain disorder.
Hassan, a U.S. citizen who lives in Stockton, and Swileh moved to Egypt after marrying in war-torn Yemen in 2016 and had been trying to get a visa for Swileh since 2017 so the family could move to California.
Citizens from Yemen and four other mostly Muslim countries, along with North Korea and Venezuela, are restricted from coming to the United States under the travel ban enacted under President Donald Trump.
When the boy’s health worsened, Hassan went ahead to California in October to get their son help. As the couple fought for a waiver, doctors put Abdullah on life support.
“My wife is calling me every day wanting to kiss and hold her son for the one last time,” Hassan said, choking up at a news conference this week.
He started losing hope and was considering pulling his son off life support to end his suffering. But then a hospital social worker reached out to the Council on American-Islamic Relations, which sued Monday, said Basim Elkarra, executive director of the group in Sacramento.
The State Department granted Swileh a waiver the next day.

Officials Try to Facilitate Legitimate Travel to the U.S.

Department spokesman Robert Palladino called it “a very sad case, and our thoughts go out to this family at this time, at this trying time.”