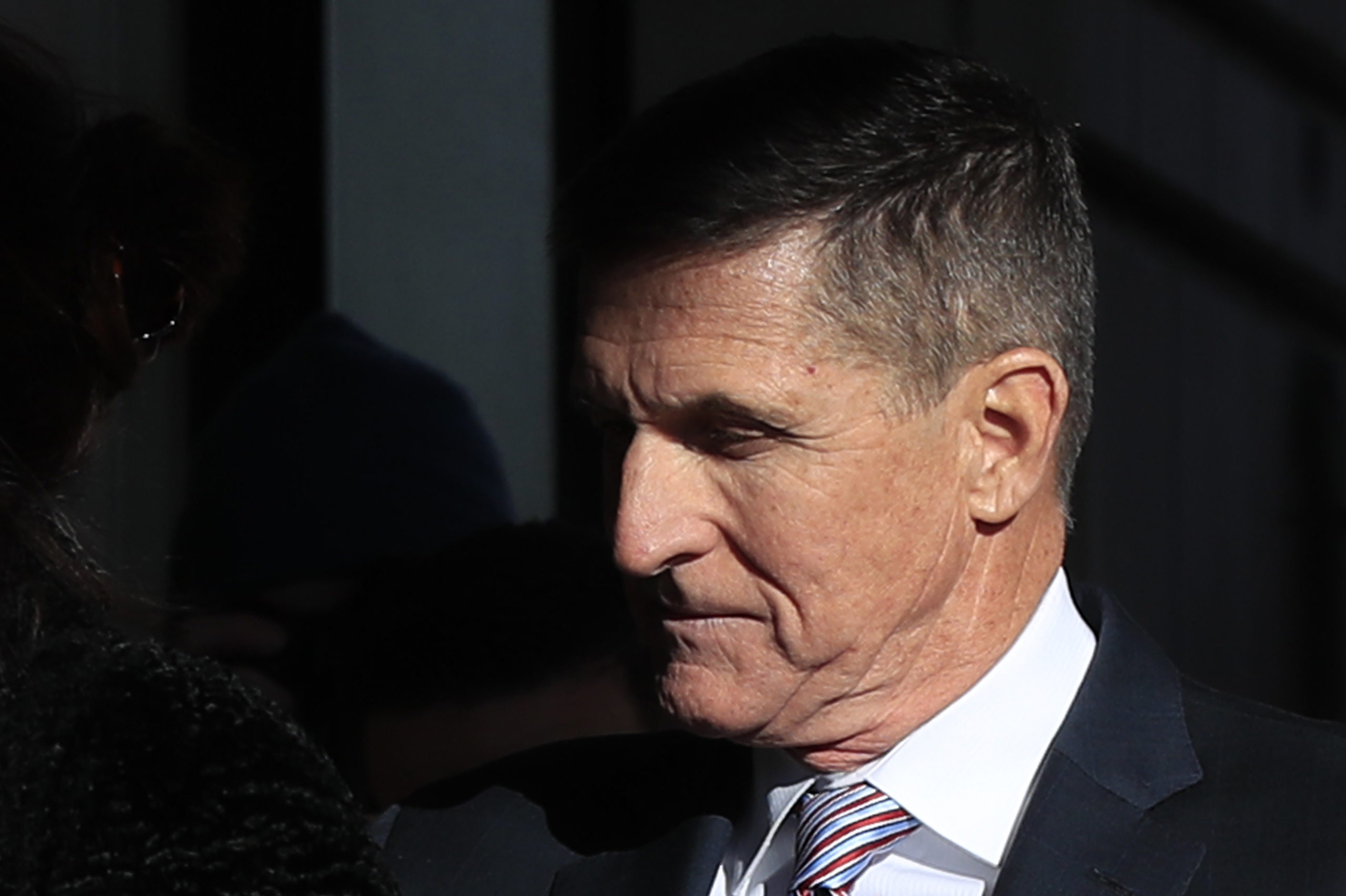 WASHINGTON — A federal judge abruptly postponed the sentencing of President Donald Trump’s first national security adviser, Michael Flynn, on Tuesday, saying he could not hide his disgust for Flynn’s crime of lying to the FBI and accusing him of selling out his country.

Judge Puts Time in Prison Back on the Table

Sullivan’s harsh words raised the prospect that he could send Flynn to prison — an unexpected development since prosecutors have recommended against prison time, citing his cooperation in special counsel Robert Mueller’s Russia probe.
The delay allows Flynn to continue cooperating with the Russia probe and get credit for it in his punishment.
The hearing came amid escalating legal peril for Trump, who was implicated by federal prosecutors in New York this month in hush-money payments to cover up extramarital affairs. Nearly a half-dozen former aides and advisers — including Flynn — have pleaded guilty or agreed to cooperate with prosecutors.
Flynn became known during the Trump presidential campaign for leading chants of “Lock her up” during rallies, referring to Trump’s rival Hillary Clinton.

Trump signaled his continued close interest in the case by tweeting “good luck” to Flynn hours before the sentencing hearing. He added: “Will be interesting to see what he has to say, despite tremendous pressure being put on him, about Russian Collusion in our great and, obviously, highly successful political campaign. There was no Collusion!”
At the White House afterward, press secretary Sarah Huckabee Sanders was asked if the administration had changed its stance on Flynn or the FBI in light of his admissions and guilty plea.
“Maybe he did do those things, but it doesn’t have anything to do with the president,” she said. “It’s perfectly acceptable for the president to make a positive comment about somebody while we wait to see what the court’s determination is.”

Good luck today in court to General Michael Flynn. Will be interesting to see what he has to say, despite tremendous pressure being put on him, about Russian Collusion in our great and, obviously, highly successful political campaign. There was no Collusion!

Sanders repeated her allegation that the FBI “ambushed” Flynn in an interview in which he denied contacts with Russian officials, and she said of Trump’s earlier criticism, “We don’t have any reason to want to walk that back.”
The new delay in sentencing upset what had been a carefully crafted agreement, with Mueller’s office saying Flynn had already provided “the vast majority” of information he could.
Flynn, who served as national security adviser for only a few weeks, was to be the first White House official sentenced in Mueller’s investigation. Prosecutors had praised his cooperation and recommended against prison, and Tuesday’s sentencing was expected to be relatively straightforward. Flynn had expected to walk out the courthouse a free man.
But the hearing turned on a dime. Sullivan lambasted Flynn for lying to the FBI in the West Wing of the White House and said he wouldn’t allow Flynn to minimize the seriousness of his crime.
After a prosecutor raised the prospect of Flynn’s continued cooperation with other investigations in the future, Sullivan warned Flynn that he might not get the full credit for his assistance to the government if he were sentenced as scheduled.
Prosecutors noted that Flynn had provided the “vast majority of his cooperation” already. But Sullivan gave a visibly shaken Flynn a chance to discuss a delay of the hearing with his lawyers, and the court went into a brief recess.
When they returned, Flynn lawyer Robert Kelner defended Flynn’s cooperation but requested a postponement to allow for him to keep cooperating. Kelner said he expected Flynn would have to testify in a related trial in Virginia involving Flynn’s former business associates, and the defense wanted to “eke out the last modicum of cooperation” so he could get credit in any sentence.
Kelner asked Sullivan not to penalize Flynn for arguments his lawyers made in sentencing memos that appeared to suggest the FBI had tricked Flynn into lying. He said they only included those to differentiate Flynn from other defendants in the case who had received short prison sentences for lying.
But Sullivan fired back.
“Neither of those individuals were a high-ranking official who committed a crime while in the West Wing and on the premises of the White House,” the judge said.

At the hearing, Sullivan told Flynn that he would take into account his extensive cooperation with the government, which includes 19 meetings with investigators as well as a 33-year military career that included service in Iraq and Afghanistan. But he also said he was forced to weigh other factors, including Flynn’s decision as national security adviser to lie to the FBI about contacts he had with the Russian ambassador to the United States.
The judge set a new hearing date for March. Flynn left the courthouse hand-in-hand with his wife, climbing into a large, black SUV as protesters heckled and supporters chanted “USA!”
___
Read the Flynn FBI interview notes: http://apne.ws/xfm8IsO

Trump Doesn't Want You to See This Documentary on Saudi Arabia