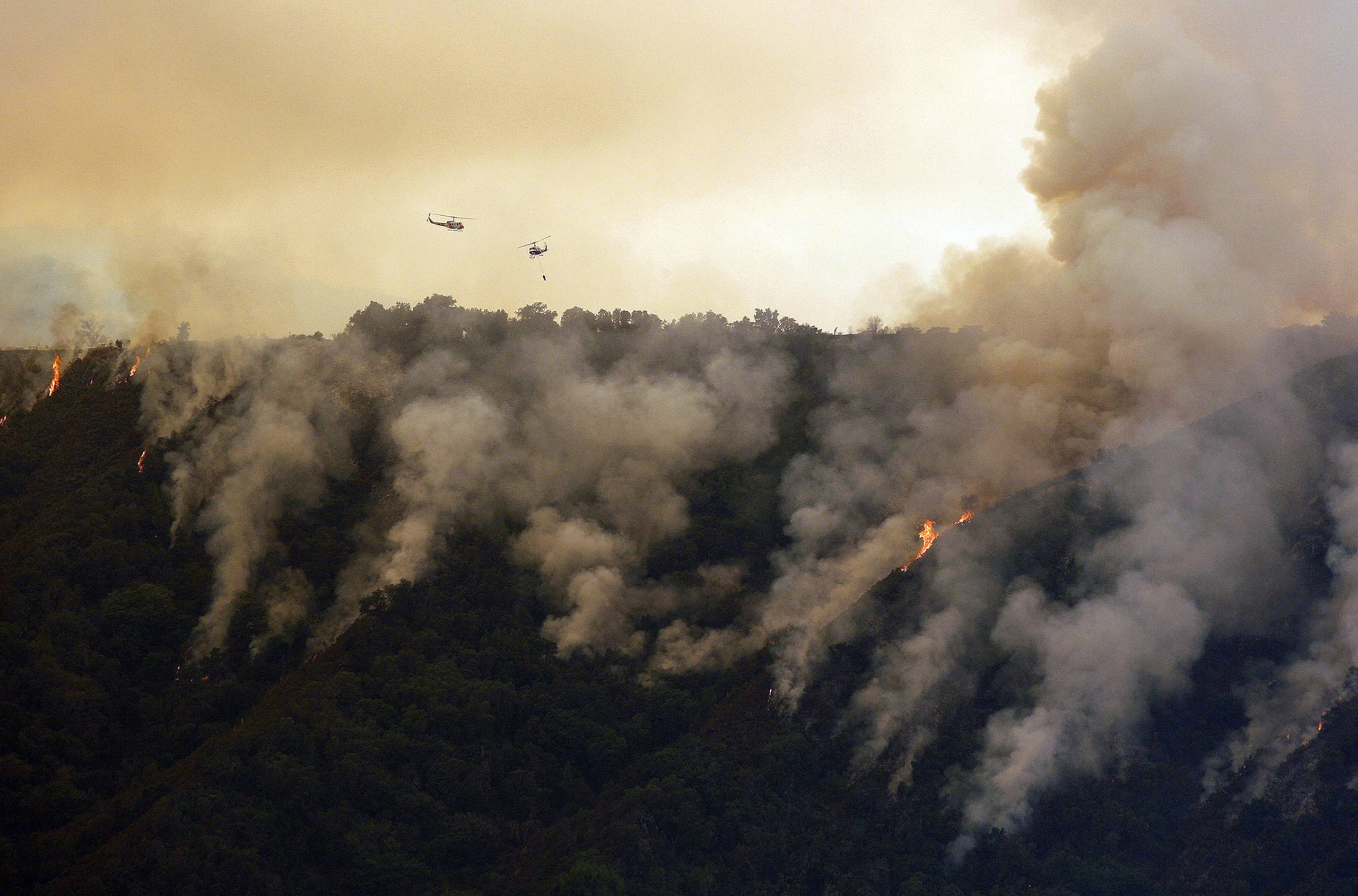 LOS ANGELES — When a wildfire burned across Big Sur two years ago and threatened hundreds of homes scattered on the scenic hills, thousands of firefighters responded with overwhelming force, attacking flames from the air and ground.

Protection of People First and Then Resources

Forest Service officials would not comment directly on the report. After asking The Associated Press to provide written questions, the agency declined to answer them and issued a short statement saying it was committed to reducing costs in similarly large fires.
“Protection of people first and then resources are our primary considerations,” the statement said. “Every fire is evaluated to determine the appropriate strategy. We continually look for opportunities to improve outcomes and accountability and to find more cost-efficient and effective methods of managing wildfires.”
In addition to burning 206 square miles, the smoky fire closed signature parks in the area and put a damper on tourism in Big Sur during the peak season of its only industry. Monterey County estimated a 40 percent loss in revenue for the summer season in the area.
An internal Forest Service review produced last year and obtained by the AP reached some of the same conclusions as Ingalsbee.
For example, the department’s review found that from Aug. 9 to Sept. 29, 2016, the number of threatened structures remained at 400 even as the fire grew by more than 90 square miles (230 square kilometers), which indicated the risk to property had abated as the flames burned into the wilderness. During that period, firefighting costs grew by $140 million. FILE – In this Aug. 13, 2016 file photo, a fire attack helicopter makes a retardant drop during a firing operation on the ridge between Mount Manuel and the Coast Ridge Road while fighting the Soberanes Fire near the village of Big Sur, Calif. The so-called Soberanes Fire burned its way into the record books as the most expensive wildland firefight in U.S. history in what a new report calls “an extreme example of excessive, unaccountable, budget-busting suppression spending that is causing a fiscal crisis in the U.S. Forest Service.” (David Royal/The Monterey County Herald via AP, File)

The review found forest managers didn’t think they could deviate from the “overwhelming force concept” aimed at suppression. It also said the agency’s protocol for managing long-term wildfires “does not sufficiently evaluate and adjust to changing risk.”

— About a fifth of the area burned was from fires set to clear brush and vegetation between outer perimeters and the active fire. One of these blazes jumped fire lines. These burnout operations created additional smoke and cost an estimated $50 million.
— A nearly $39 million air campaign, including large air tankers that cost $5,720 per hour, was largely ineffective. Retardant is effective at slowing flames only where ground crews can remove vegetation to create containment lines. But drops were done deep in steep, rugged wilderness where it was too dangerous to send crews, and even where flames never reached.
— Bulldozers, which cost $1,700 per hour, tore up wilderness, creating what Ingalsbee called “ghost roads” that will remain for years. The Forest Service spent an estimated $1 million a day for weeks repairing damage done by dozers.
The report concluded that once the blaze that broke out July 22, 2016, entered wilderness, there was little chance of stopping it before fall rains fell.
Chad Hanson, an expert on fire and director of the John Muir Project, a nonprofit environmental group, said the cost was stunning, but the approach to fire was business as usual.
“It’s sort of shocking that this massive amount of taxpayer money is being spent trying to suppress backcountry fires that are weather-driven and can’t be stopped until the weather changes, rather than focusing resources on protecting communities,” Hanson said. “On the other hand, I’m not surprised the Forest Service is doing this because it’s been their practice for years.”

Criticizing the Leadership on the Fire

One beneficiary of the firefighting effort was Tom Little Bear Nason, who lives in a homestead in the national forest his family has owned for 150 years. He was also a contractor on the fire, with a team of dozer operators.

US Homeless Count up Slightly, but Declines in Key Cities