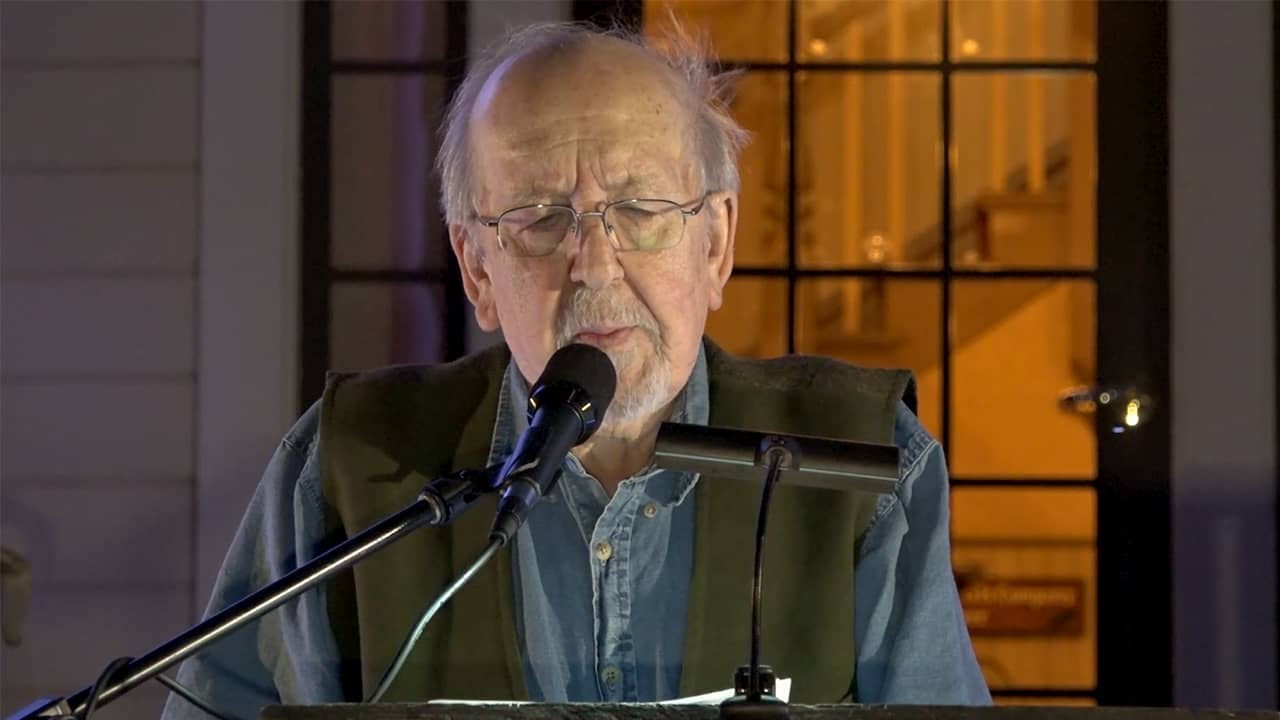 When I was in high school, my father worked at a gas station and wrote poetry late at night in our kitchen. He wrote old-fashioned poems. I now know they were decent, but the poetry experience was generally uninteresting to me. 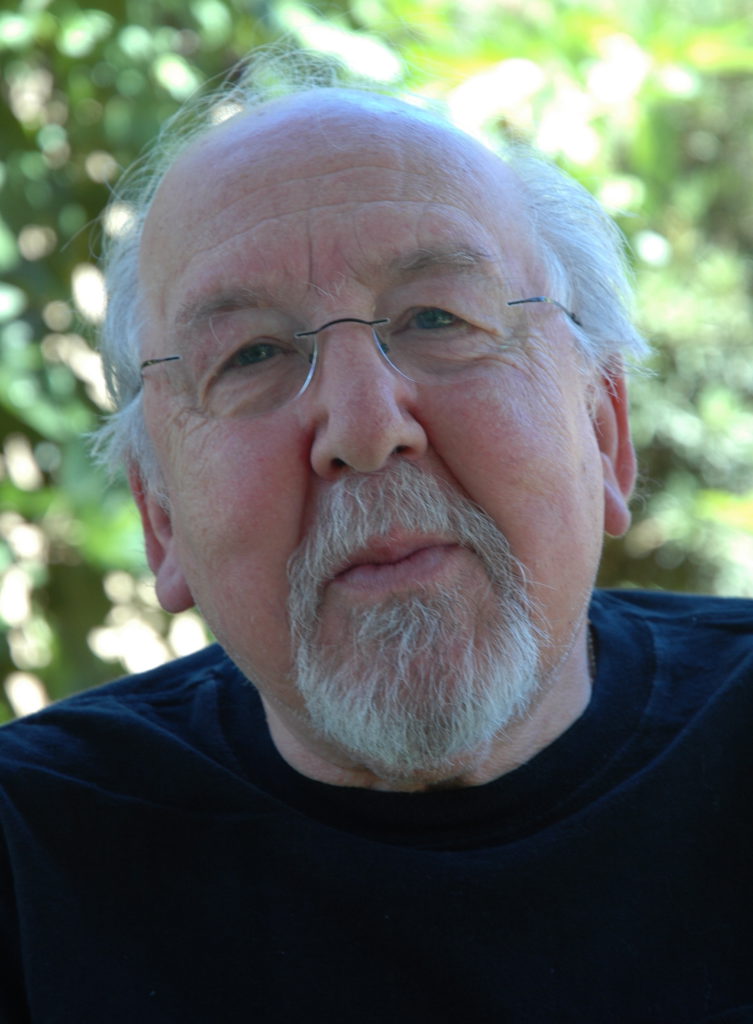 Fresno poet Peter Everwine died on October 28 at the age of 88.

In my twenty-seventh year, I worked in a tire yard while I lumbered through community college and into California State University, Fresno, where I enrolled as a Political Science major, losing hair and weight trying to memorize case law from obscure texts.

The ‘Fresno School’ of Poetry

By the time I found poetry again — or at all, in any real sense — I felt beaten by the academic world. Enter the Fresno poetry scene.

“Fresno poets…found a way to talk about the beauty of the world while wearing dirty shirts.”

It was easy to feel beaten in a town like Fresno and easy to commune with the poetry from the “Fresno School,” as it’s sometimes called, because it embodied the outsider. There’s a kind of shame one easily has about growing up here, as if you can’t quite get your shirt clean and I soon loved the gang of Fresno poets who found a way to talk about the beauty of the world while wearing dirty shirts.
Philip Levine came from Detroit and wrote beautiful, working-class poems. C.G. Hanzlicek’s poems poked at you with the clarity of his mentor, James Wright. Larry Levis devoured Baudelaire and spit out lines with incredible vision. Montoya was urgent, Omar was crazy-beautiful, Hales and Vineberg charted little landscapes of sadness. Spear, Soto, Turner … the list goes on.
It felt crazy lucky to know these people were writing from or about the place in which we carried our Fresno shame. In the middle of all this was Peter Everwine.

Peter Everwine reads “Elegy for a Grey Wolf” at Respite at the River event in Fresno on Sept. 12, 2018. Video courtesy of Paul Starcevich, community producer with Community Media Access Collaborative.

Though Levine was far more prolific and more often celebrated, I consider Peter the patriarch of the Fresno School. His was arguably the quietest voice among his contemporaries and, I would argue, the strongest. I write “strongest” not to belittle the power of those other voices, which is undeniable. What I mean is that his poetic voice was an assurance.
After Everwine’s death in late October, my neighbor Wayne said of him, “he knew the names of neighbors, postmen, and painters. He would have been lonely without modesty.” I know what Wayne means. I have had men gently note a momentary lapse of humanity in me and I have been sobered by it. The Experience of Everwine’s Poems

Reading Everwine’s poems is something like that experience. In a few lines here or there he suggests a quiet truth or a reasonable way to breathe through despair, as in these final lines from his poem, “After the Funeral”:
Goodbye, goodbye, we said, closing
the door behind us, going our separate ways
from the house we had emptied,
and which, in the closing days, we would fill
again and empty and try to fill again.
You see how he leaves us now with that quiet sense of authority, more compassionate than moral? “Good poems seem to have a touch,” Everwine once said, not speaking, of course, of his own good poems. My neighbor again puts it well when he says of the poet: “he left [us] room for remorse or sadness.”

The Generosity of His Language

When I was twenty-seven and in despair about my own abilities and my own capacity to be a good human, Everwine’s poems softened my world with those possible ways of rethinking a life less-than-good. Having heard his name in the mouths of graduate-student writers I admired, I found Collecting the Animals in a bookstore in San Francisco. I was so taken by the generosity of his language, by the subtlety and precision in the verse, that I sat on the carpet of the bookstore and read the collection from beginning to end before reading the collection again to decide on my favorite poems.
That was twenty years ago and I’ve only done something like that once since.

“At one point, the sound system squealed as Peter quietly read a poem. We wanted to climb into a hole.”

When that same friend and I ran a poetry reading series in our then-shared Fresno, Peter asked, through his good friend, poet Christopher Buckley, if we would be willing to host a reading for his new collection, A Small Clearing. “Be Willing”?! Yes!
We were beside ourselves with nervousness leading up to and including the night of the reading. The house was packed with both admirers and local students who did not really know his work (which means they made too much noise). We read our meager introductions for the night’s event. At one point, the sound system squealed as Peter quietly read a poem. We wanted to climb into a hole.
Afterward, Peter thanked us in his soft voice. He shook our hands and patted our shoulders. It was a great event. Thank you so much for your generosity, boys. I’m so glad you’re putting things like this on. Generous voice in the poetry, generous voice in person.

‘One Less Voice to Remind Me…’

I feel a little less safe with him gone. There is less beauty to go to. There is one less voice to remind me of my obligation to be kind to others and myself. “Perhaps it’s as you say,” he wrote, in the poem by the same title, “that nothing stays lost forever” and later:
I do not know if our loves survive us
Waiting through the long nights for our step
Or if they will know us then
Entering our flesh with the old sigh.

I can’t know who Peter was speaking to when he wrote those words in 1970 or if he, younger than I am now, could have intended that wisdom. That kind of wisdom sometimes surprises the writer, like a gift given for the hard work of it all. I know that he was careful with his words but not with his sentiments, his heart.
I know, too, that he was patient with young poets and poetry readers. I will do what one does when a great one dies: revisit their work and get back to my own.
And I am greedy for Everwine. I admit that.
I want to read his poems at night as the evenings of this month grow darker and feel sorry for myself.
About the Author

Joseph Voth is Professor of English at Fresno City College. He is the author of the poetry collection, Living with Noise, and is co-host of the classic film podcast, The Finleys on Film (www.finleysonfilm.com).  And he is co-host of the Fresno poetry reading series, Remix Readings.

Can You Believe It? Kirk Douglas Celebrates 102nd Birthday.