Trump Prods McConnell on Sentencing Bill: 'Go for It Mitch!' 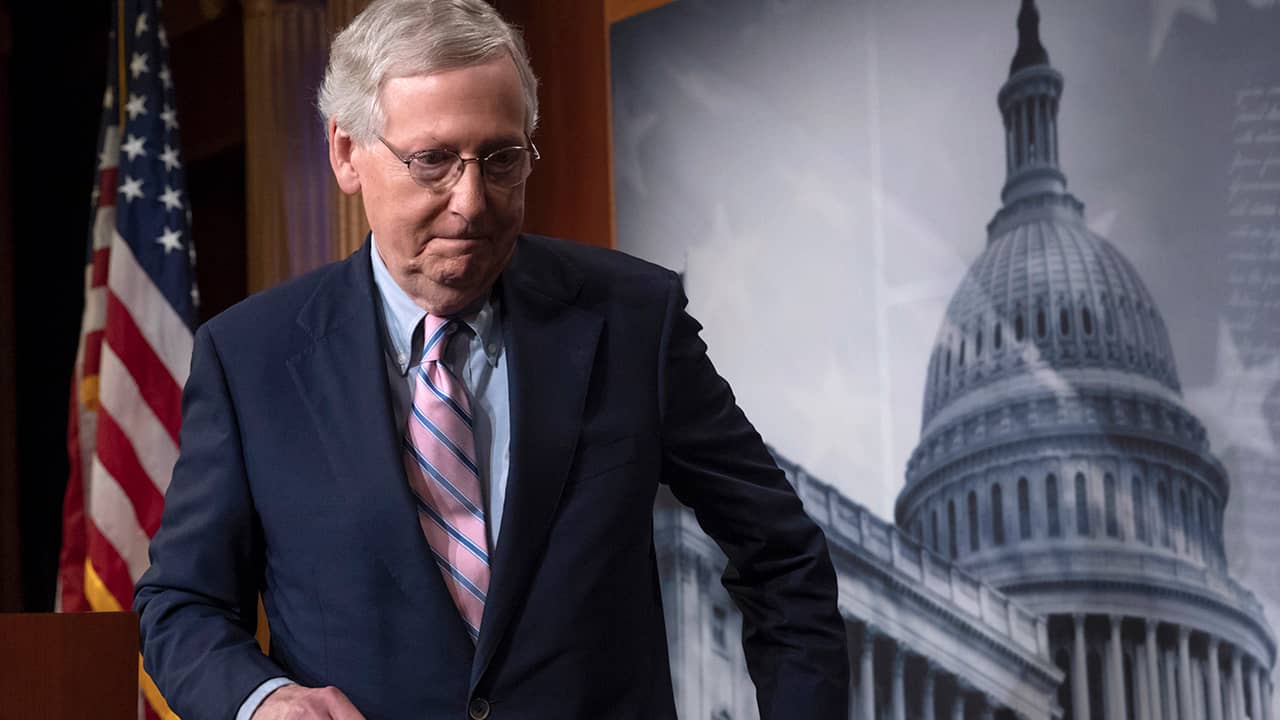 WASHINGTON — Senate Majority Leader Mitch McConnell’s reluctance to hold a vote on a popular criminal justice bill has angered top Republican senators and created an unusual rift with a longtime GOP ally, Sen. Chuck Grassley of Iowa. And on Friday, it also brought on a tweet from President Donald Trump.
“Hopefully Mitch McConnell will ask for a VOTE on Criminal Justice Reform,” Trump tweeted. “It is extremely popular and has strong bipartisan support. It will also help a lot of people, save taxpayer dollars, and keep our communities safe. Go for it Mitch!”

Hopefully Mitch McConnell will ask for a VOTE on Criminal Justice Reform. It is extremely popular and has strong bipartisan support. It will also help a lot of people, save taxpayer dollars, and keep our communities safe. Go for it Mitch!

Minutes later Grassley tweeted that he and the president had spoken about “the growing support” for the legislation.
“Pres Trump told me he wants it done THIS CONGRESS,” Grassley tweeted.
Grassley has spent years working to build a coalition around the bill and is pushing for a year-end vote. Grassley says more than two-thirds of the Senate supports it. But McConnell is refusing to bring the legislation forward in a standoff that’s dividing the Republican majority and putting President Donald Trump on the spot.

This Is Not the Way the Senate Is Supposed to Operate

“We’ve done what needs to be done,” Grassley said about the overwhelming support for the bill. “So what’s holding it up?”

The Biggest Sentencing Overhaul in Decades

“Just talked with President,” Graham tweeted. “He strongly believes criminal justice reform bill must pass now. He also indicated he supports putting criminal justice reform bill on year-end spending bill which must include MORE wall funding.”
Trump has called senators about the bill and spoke briefly about it Friday at an event on safe neighborhoods in Kansas City.
The bill is a project of Trump’s son-in-law, White House adviser Jared Kushner, and would be the biggest sentencing overhaul in decades. It would reduce mandatory prison terms for certain drug crimes and give judges in some cases more discretion on punishments. It would allow about 2,600 federal prisoners sentenced for crack cocaine offenses before August 2010 the opportunity to petition for a reduced penalty. It also includes provisions to encourage education and workforce training in prisons.
Roughly 90 percent of prison inmates are held in state facilities and would not be affected by the legislation.
While Kushner has been meeting with senators on Capitol Hill, Trump is also hearing from allies who are against the legislation. Chief among them is Sen. Tom Cotton, R-Ark., who is warning senators that Republicans will be blamed if criminals are released and commit new crimes.

“Only thing worse than early release from prison of thousands of serious, violent, & repeat felons is to do that in a spending bill with no debate or amendments, forcing senators to either shut down government or let felons out of prison,” Cotton tweeted Friday. The spending bill will need approval by Dec. 21 to avoid a funding lapse days before Christmas.


“Only thing worse than early release from prison of thousands of serious, violent, & repeat felons is to do that in a spending bill with no debate or amendments, forcing senators to either shut down government or let felons out of prison.” — Sen. Tom Cotton, R-Ark.
Cotton and others, including Sen. John Cornyn of Texas, No. 2 Senate Republican, insist there is not as much support for the bill as Grassley claims. Cotton says senators may tell the chairman they’re in favor of it when actually they’re not.
The bill has support from several conservative and liberal advocacy groups, uniting such disparate partners as the influential Koch network and the American Civil Liberty Union, but it splits law enforcement groups. It is backed by the Fraternal Order of Police and the International Association of Chiefs of Police but opposed by the National Sheriff’s Association.
Amid this divide, McConnell has been choosing caution, saying there’s just not enough time to push the bill forward in the remaining days of the Congress.
“The question is, can you shoe-horn something that’s extremely controversial into the remaining time?” he said Monday in an interview at a Wall Street Journal forum.

McConnell and Grassley Have Worked Side by Side for Decades

Criminal justice reform has traditionally been a Democratic priority, as Republicans prefer a more tough-on-crime approach. And McConnell acknowledges it’s “extremely divisive” among Senate Republicans. Leaders tend to protect senators from taking tough votes that could have political blowback.
Sen. Rand Paul, R-Ky., said Thursday that bill backers are making a last-push to attach it to the spending measure and picking up new supporters. But he acknowledged the package’s chances are slipping with each passing day. “We’re still lobbying Sen. McConnell — he has all the power to allow it or not allow it,” said Paul.
McConnell and Grassley have worked side by side for decades. When then-President Barack Obama nominated Merrick Garland to the Supreme Court in early 2016, Grassley stood by McConnell’s decision to keep the seat open during the election year for the new president to decide. He’s ushered in 84 Trump judicial nominees, including a record number of circuit court judges.
But their split over criminal justice reform is testing not just their partnership but also the longstanding norms of the Senate.
“What’s holding it up is our leader, the majority leader,” Grassley said. “There’s no reason it shouldn’t come up.”