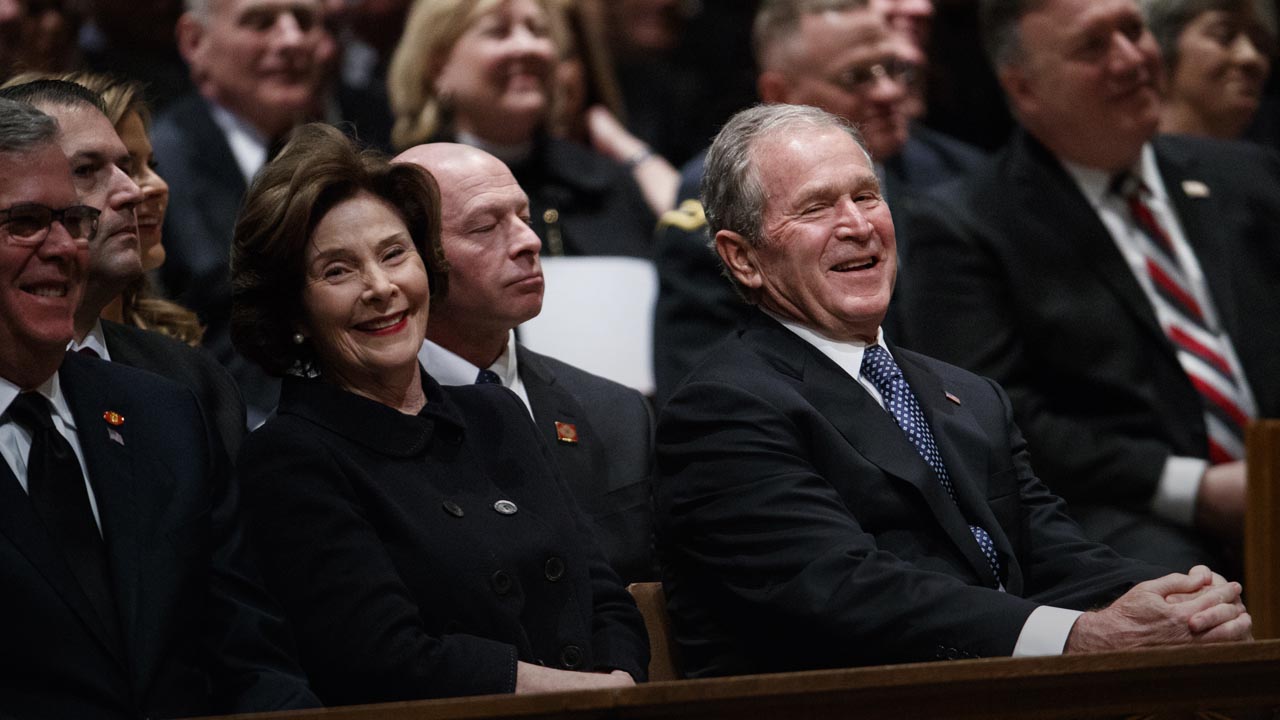 WASHINGTON — Memories of George H.W. Bush’s underappreciated sense of humor drew laughter and brought smiles to the sorrowful mourning of the death of American’s 41st president.
Presidential historian Jon Meacham recounted how comedian Dana Carvey once said that the key to doing his iconic impersonation of Bush was to mimic “Mr. Rogers trying to be John Wayne.”
That prompted chuckles that rang from the vaulted arches inside the Washington National Cathedral.

Meacham said once on the primary campaign trail in New Hampshire, Bush mistakenly grabbed the hand of a department store mannequin asking for votes. Meacham said, “When he realized his mistake, he said ‘Never know. Gotta ask.'”
The former president, who died Friday at age 94, often had tongue-twisted moments and uttered funny one-liners.
Looking ahead to the 1988 election, Bush once said: “It’s no exaggeration to say that the undecideds could go one way or the other.” And Meacham said that late in his presidency, Bush’s tongue ran amok when he said: “We are enjoying sluggish times, but we’re not enjoying them very much.”

The former president’s eldest son, former President George W. Bush, got in on the act, telling the packed cathedral that his father was no Fred Astaire on the dance floor and couldn’t stomach vegetables, especially broccoli. While president, the elder Bush famously declared his dislike of broccoli.
George W. Bush said his father also shared jokes via email with his circle of friends. “His grading system for the quality of the joke was classic George Bush: The rare sevens and eights were considered huge winners, most of them off-color,” the younger Bush said.
He said his dad really got the last laugh of the day because he chose former Sen. Alan Simpson to be one of the people to speak at Wednesday’s ceremony.
“He placed great value on a good joke, so he chose Simpson to speak,” the younger Bush said.

Simpson said his friend never lost his sense of humor.
“He had a very serious flaw known by all close to him: He loved a good joke — the richer the better,” Simpson said. “And he threw his head back and gave that great laugh, but he never, ever could remember a punchline. And I mean never.”
“Humor is the universal solvent against the abrasive elements of life,” Simpson continued. “He never hated anyone. He knew what his mother and my mother always knew: Hatred corrodes the container it’s carried in.”

Nonprofits Get Creative For Home of Hope Fundraiser