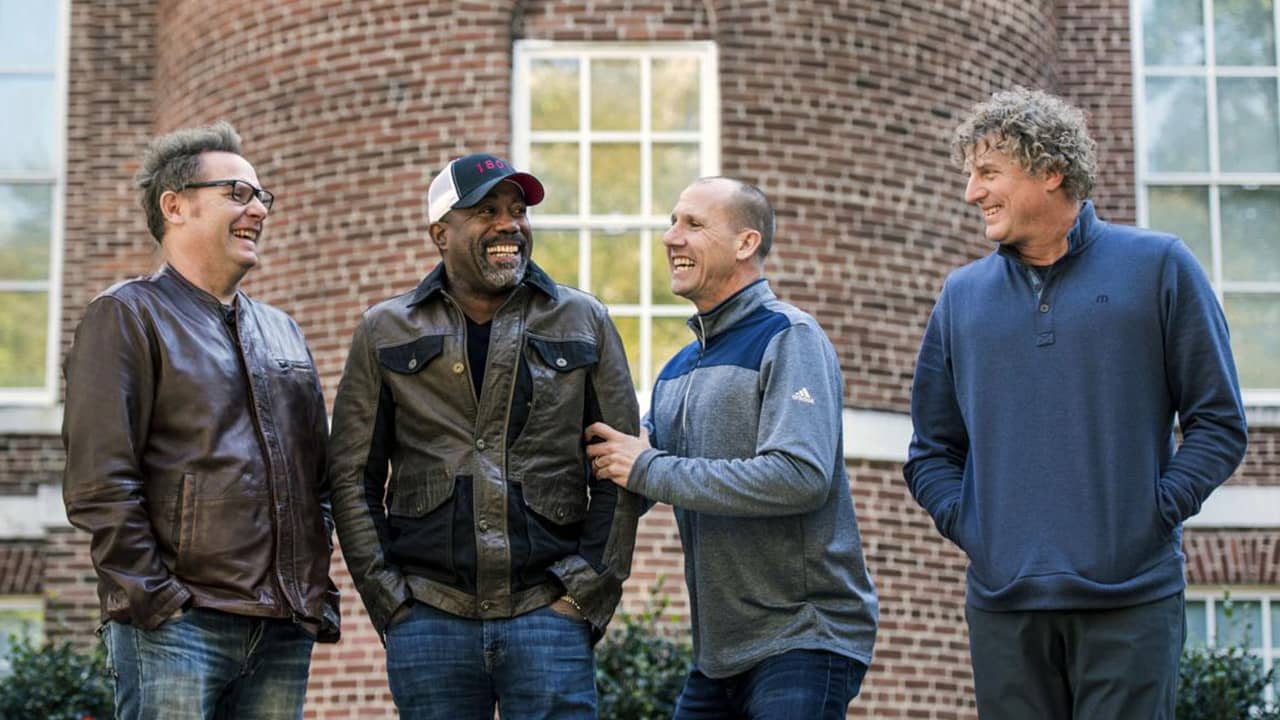 NASHVILLE, Tenn. — Twenty-five years after “Cracked Rear View” launched their careers, Grammy-winning rock band Hootie & the Blowfish will release a new album and launch an official tour next year after a decade-long break.
The Southern pop-rockers, featuring lead singer Darius Rucker, Mark Bryan, Jim Sonefeld and Dean Felber, broke out with their major label debut in 1994, which has been certified 21-times platinum and made the Recording Industry Association of America’s list of the top-10 most popular albums of all-time.
With Top 10 hits like “Hold My Hand,” ”Let Her Cry” and “Only Wanna Be With You,” the South Carolina-based band went from playing college bars to selling out arenas and winning best new artist at the Grammy Awards in 1996. The band put out five studio albums and other live albums, never coming close to the popularity of the first, with the last one in 2006. Their last official tour was in 2007.
But with a big anniversary approaching in 2019, the four musicians who still play together a couple times a year for annual charity events decided it was time to go out on the road and bring with them some new music.

“Nothing has changed,” insists Rucker, who is now a major country star in his own right with several country radio hits like “Wagon Wheel.” ”When the four of us get back together, we fall into the same dynamic of the band that’s always there. We’ve been a band for pretty much 30 years now. We’re just older now. There’s a lot less alcohol.”


”When the four of us get back together, we fall into the same dynamic of the band that’s always there. We’ve been a band for pretty much 30 years now. We’re just older now. There’s a lot less alcohol.” — Darius Rucker
Rucker said they hope to have a single out in the spring with a full album next summer. The Group Therapy Tour starts May 30, 2019, in Virginia Beach, Virginia, and will hit 44 cities, including the Hollywood Bowl in Los Angeles, T-Mobile Arena in Las Vegas, Madison Square Garden in New York and Bridgestone Arena in Nashville, Tennessee. The tour ends in Columbia, South Carolina on Sept. 13.
The band talked to The Associated Press from Columbia, where they all met as students at the University of South Carolina, to discuss why their album was so successful, deciding to go dormant as Rucker explored his solo career and returning to their hometown on tour. The answers have been edited for brevity.

University Has Changed a Lot

AP: How different does the campus look now from when you went there?
Felber: The university has changed a lot. The dorm where we actually met is now in the dump (the university demolished the dorm several years ago). It’s improved and grown massively.
Bryan: One interesting fact is we’re going to be doing our first Columbia, South Carolina, show in probably 20 years. The town that we came out of, that we played a million shows in when we were young, we haven’t played here in 20 years or almost.
AP: Are you expecting a lot of old college friends to start texting you again?
Rucker: We’re changing our phone numbers.

AP: Looking back at “Cracked Rear View,” the crazy amount of success and attention must have been a big change for you?

AP: Was there a conscious decision to put the band on hold?
Sonefeld: The idea of going dormant for an unknown period of time can be daunting or scary. But we felt like going away for a while, getting back to our families and a little bit more of a sedentary lifestyle might be a good experiment. We didn’t say we were going away for six months or six years. We just said, ‘Let’s go dormant.’ And Darius was releasing his first (country) single at the same time. So, he really got the opportunity to put a great effort, a full effort into country music. And when that blew up, it helped in some ways to secure that we would be dormant for more than six months.
AP: Where are you in the recording process?
Felber: We have a bunch of songs, and so now we are just working on it and getting them together and deciding which ones are going to be good and which ones aren’t going to be good. And then just kind of playing and writing in the studio.

AP: Beyond Columbia, are there certain venues or cities you’re excited about playing again?