Will the Democratic Blue Wave knock Rep. David Valadao out of his 21st congressional seat?

The race is now so close that the winner — the three-term Republican incumbent or challenger TJ Cox — might not be known until the Dec. 7 deadline for counties to certify the election.

But next Monday (Nov. 26) could provide the biggest clue yet as to the eventual winner.

The 21st district covers parts of Fresno, Tulare and Kern counties, as well as all of Kings County.

Valadao went to bed on election night with a Dewey-esque lead of 8 percentage points. Now, with more results coming in, the incumbent leads by less than 1 percent — just a 447- vote separation.

Fresno County, where Valadao has won 52% of the votes so far, will release its next update Wednesday (Nov. 21).

Here’s a breakdown of the county support for the candidates:

Here’s a look at what’s left to count and when the next updates are scheduled:

The various county clerks offices could not say how many of those remaining ballots are in District 21.

Trends may favor Cox. There are more votes to count in Kern, which is favoring Cox. There are fewer votes in Kings and Tulare, counties that have favored Valadao. Fresno could be the wild card.

“While we have been considered underdogs and counted out, we knew that our message of expanding access to health care, creating good jobs, and improving opportunities for families here in the Central Valley resonated with voters,” Cox said in an email statement. “We are on track to win, and we are still working hard to make sure that every vote is counted and each voter has their chance to be heard.”

The sprint to become the next Fresno County supervisor starts in a few weeks.

Andreas Borgeas will officially vacate the seat Dec. 3, when he swears-in as a state senator. The remaining supervisors the next day will call for a special election.

Fresno City Councilman Steve Brandau has said that he is running.

Others say they are thinking about it. That includes Fresno County prosecutor Andrew Janz, who lost in his high-profile challenge of Rep. Devin Nunes.

Former Fresno County Blood Center CEO Dean Eller says he hasn’t made a final decision yet, but he hopes to know by next week.

Brian Whelan, a Fresno attorney who lost a city council bid in the Nov. 6 election, says he’s thinking about running for supervisor.

Others are considering running but don’t wish to have their names made public.

The special election is March 5, 2019. If no candidate receives a simple majority, a run-off with the top two finishers will take place June 4. 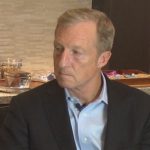 Is Tom Steyer running for president?

The liberal billionaire and top Democratic campaign donor launched his “5 Rights” campaign today (Nov. 20). He will be in Fresno on Dec. 13 to talk about Right No. 2, the right to air and clean water.

Steyer’s office said an exact time and location are being worked out. He has visited Fresno a few times over the past two years.

Some pundits speculate that this could be a prelude to a 2020 presidential run by Steyer.

He placed a full-page ad USA Today to outline his proposed five rights, which also include right to an equal vote, health, the right to learn and a living wage.

“These rights are fundamental to our shared belief in the promise of America, a promise of the freedom and power to pursue our dreams and earn a fair share of this country’s vast wealth,” Steyer said. “A hostile takeover of our democracy by large corporations and their enablers in politics has eroded that promise, and we must act to reclaim that power and put it back in the hands of the American people.”

In 2018, Steyer spent roughly $120 million on mobilizing young voters to help Democrats and registering more than 257,000 young voters on more than 400 campuses in 11 states. He has also advocated for President Donald Trump’s impeachment, producing a nationwide advertising campaign to that effect. 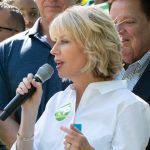 The ambassadors “will encourage California’s communities and organizations to spread the word about opportunities to engage in the “All in California” process and the future of California,” his campaign said in a statement.

Swearengin was also recently interviewed by the Urban Institute, where she said some of Fresno’s development problems could be attributed to “white flight.” A recap can be read here.

When Newsom visited Fresno on June 1 before the primary, he promised to increase Valley representation on state boards, including those overseeing the UC and CSU systems.