Florida Is Again at the Center of an Election Controversy 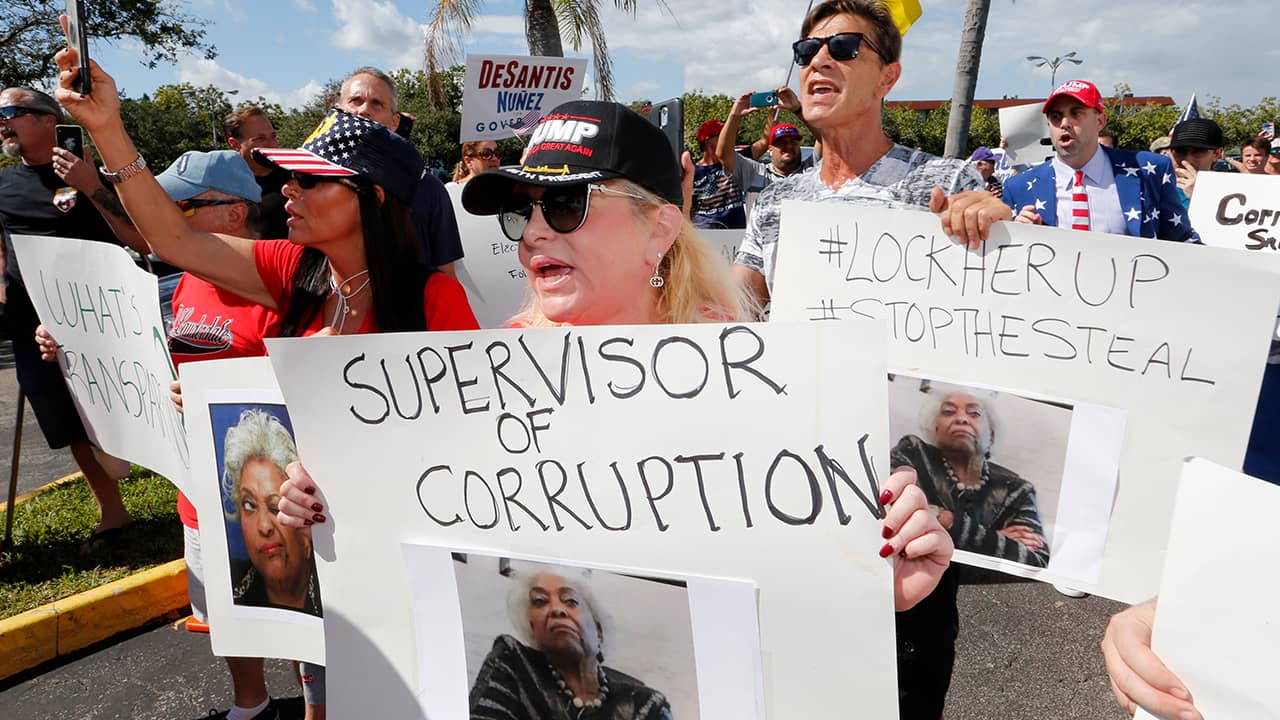 FORT LAUDERDALE, Fla. — Florida is once again at the center of election controversy, but this year there are no hanging chads or butterfly ballots like in 2000. And no angry mobs in suits — at least not yet.

The deeply purple state will learn Saturday whether there will be recounts in the bitter and tight U.S. Senate race between Republican Gov. Rick Scott and incumbent Democrat Bill Nelson; and in the governor’s race between former Republican U.S. Rep. Ron DeSantis and the Democratic mayor of Tallahassee, Andrew Gillum.

The state’s recount procedures have been revised since Florida held the country hostage for a month 18 years ago, when George W. Bush edged Al Gore for the presidency. Among other things, the infamous punch-card ballots are no longer.

Yet, Scott and President Donald Trump on Friday alleged fraud without evidence, even as the often-laborious process of reviewing ballots in a close race continued ahead of the Saturday noon deadline. Both Scott and Nelson sought to get the courts to intervene.

Scott said “unethical liberals” were trying to steal the election in Democratic strongholds of Broward and Palm Beach County. He suggested something was awry because vote-counters were taking longer there than in other jurisdictions, and his thin lead has kept narrowing since Election Night. On Friday, he led by 0.21 percentage point, low enough to require a recount.

“He himself said that as ballots are being counted, it is tightening. Then he made some veiled threat or suggestion that he was somehow going to involve law enforcement.” — Nelson lawyer Marc Elias

“He himself said that as ballots are being counted, it is tightening. Then he made some veiled threat or suggestion that he was somehow going to involve law enforcement,” Elias said. “This is not a third world dictatorship. We do not let people seize ballots when they think they’re losing.”

In Washington, Trump took Scott’s side, telling reporters that the federal government could get involved and adding: “all of the sudden they are finding votes out of nowhere.”

“What’s going on in Florida is a disgrace,” he said.

The governor, meanwhile, filed lawsuits in both counties seeking more information on how their ballots were being tallied. Nelson filed his own federal lawsuit Friday, seeking to postpone the Saturday deadline to submit unofficial election results.

A judge on Friday sided with Scott and ordered Broward County’s election supervisor to release the voter information sought by the governor by 7 p.m. on Friday.

The ruling came as the Broward Canvassing Board met to review ballots that had been initially deemed ineligible. Lawyers from the campaigns, journalists and citizens crowded into a room to observe the proceedings.

The county has not answered questions about its process and about how many votes it has left to count.

Broward County has a troubled election history, Its county’s election supervisor, Brenda Snipes, has been at the center of several controversies, including one 2016 case in which her office destroyed physical ballots but kept digital copies. A judge ruled that the law had been violated.

“Anomalous” Ballots Not Yet Counted Because of Irregularities

In Riviera Beach, the Palm Beach County Canvassing Board met Friday morning to review “anomalous” ballots not yet counted because of irregularities that prevented a machine-reading. Those included instances where a voter might have over-voted, trying to cross out a choice and indicating a preferred one with an arrow.

In Riviera Beach, the Palm Beach County Canvassing Board met Friday morning to review “anomalous” ballots not yet counted because of irregularities that prevented a machine-reading.

In the race for governor, DeSantis was leading by 0.47 percentage points. While that margin, if it holds, would require a recount, DeSantis has mostly stayed out of the fray, saying he was working on plans for taking office in January.

Gillum conceded on Election Night, but as the vote margin began to narrow Thursday he said he wanted to see every vote counted, strongly indicating he would not stand in the way of a recount.

A third state-wide race that could go to a recount — the agriculture commissioner race between Democrat Nikki Fried and Republican Matt Caldwell — is the tightest of all, with Fried holding a 483-vote lead — a margin of 0.006 percent.

In 2000, Broward and Palm Beach each played central roles in the Bush-Gore race.

Some Ballots Had to Be Examined by Hand

At the time, both counties used punch card ballots — voters poked out chads, leaving tiny holes in their ballots representing their candidates. Some didn’t press hard enough, leaving hanging or dimpled chads that had to be examined by hand, a long and tiresome process.

Palm Beach also was home to the infamous “butterfly ballot” that many Democrats believe cost Gore the election. An election official’s attempt to make the candidate’s names bigger and easier to read for senior citizens resulted in them being listed in two columns instead of one. Analysts later said the new redesign may have confused voters and probably cost Gore votes.

As for the angry mobs in suits: In late November 2000, Republican operatives in suits stormed the Miami-Dade canvassing board’s meeting, causing the members to permanently stop their recount, even after police officers restored order. The melee became known as “The Brooks Brothers Riot.”