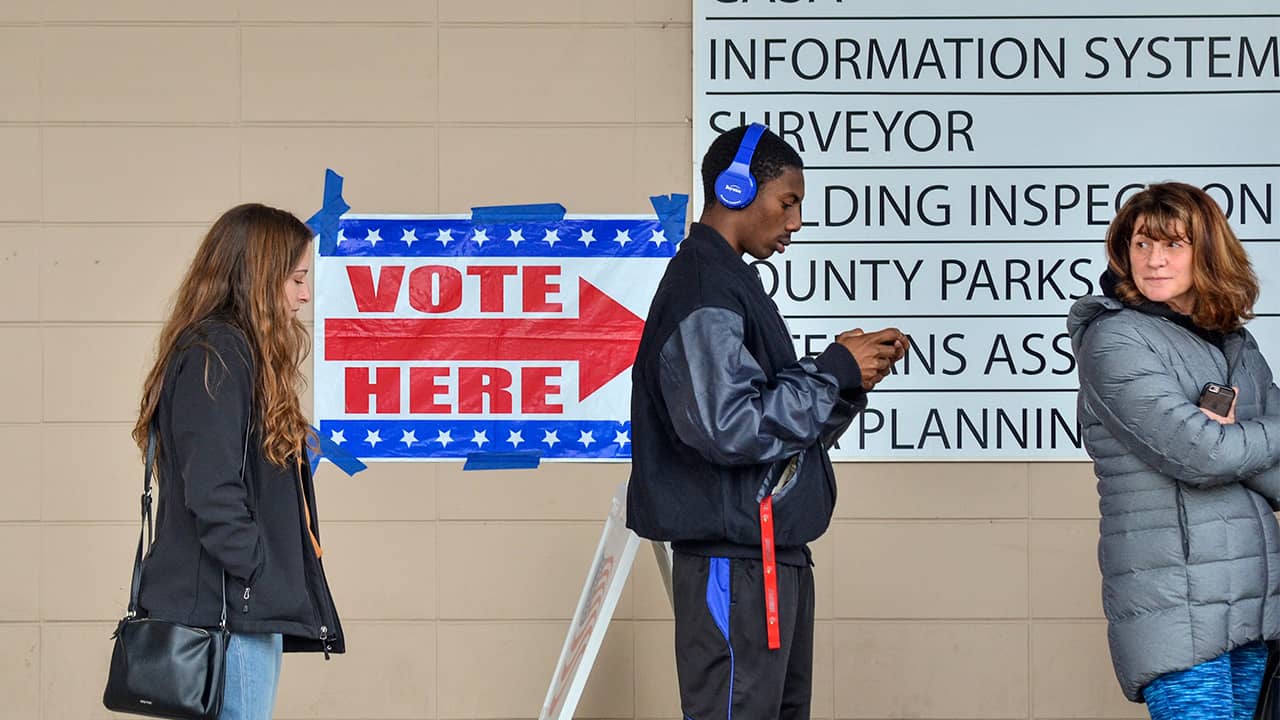 ATLANTA — Long lines and malfunctioning machines marred the early hours of voting in some precincts across the country Tuesday. Some of the biggest problems were in Georgia, a state with a hotly contested gubernatorial election, where some voters reported waiting up to three hours to vote.

“We’ve been trying to tell them to wait, but people have children. People are getting hungry. People are tired.” — Ontaria Woods, voter

At a polling place in Snellville, Georgia, more than 100 people took turns sitting in children’s chairs and on the floor as they waited in line for hours. Voting machines at the Gwinnett County precinct did not work, so poll workers offered provisional paper ballots while trying to get a replacement machine.

One voter, Ontaria Woods, said about two dozen people who had come to vote left because of the lines.

“We’ve been trying to tell them to wait, but people have children. People are getting hungry. People are tired,” Woods said. Woods said she and others turned down the paper ballots because they “don’t trust it.”

Joe Sorenson, a spokesman for the county’s supervisor of elections, said some precincts “have had issues with express polls,” devices election workers use to check in voters and create access cards for voting machines.

Across the United States, even before Tuesday’s vote, there were a wide variety of concerns with voting and registration systems around the country — from machines that changed voter selections to registration forms tossed out because of clerical errors.

Fear That Voter Confidence in the Results Could Be Undermined

Election officials and voting rights groups have feared that voter confidence in the results could be undermined if such problems become more widespread Tuesday, as millions of Americans decide pivotal races for Congress and governor.

Georgia’s governor’s race is one of the most closely watched contests, pitting Democrat Stacey Abrams, who is seeking to be the first black woman in U.S. history to be elected governor against Brian Kemp, the veteran secretary of state who has come under fire from Democrats for overseeing an election in which he is on the ballot.

Reports of security vulnerabilities within the state’s online voter registration portal prompted a flurry of accusations from Kemp’s office, which claimed without providing evidence that Democrats had tried to hack into the system. Democrats dismissed that as an effort to distract voters from a problem in a system Kemp oversees.

In a voting precinct at a senior living complex in Atlanta, voters waited in the rain in long lines that stretched around the building. Confused workers turned voters away from the parking lot.

Hannah Ackermann said election officials at the polling site in Fulton County offered various explanations for the delay, including blaming workers who didn’t show up and overloaded machines.

County elections director Ricard Barron said had heard about long lines, but no other issues. He said some of the long lines are “because the ballot is really long.”

Reports of broken ballot scanners surfaced at polling places across New York City. Turnout was so heavy at one packed precinct on Manhattan’s Upper West Side that the line to scan ballots stretched around a junior high school gym on Tuesday morning. Poll workers there told voters that two of the roughly half-dozen scanners were malfunctioning and repairs were underway.

“People are grumpy and frustrated but positive in a weird way, making jokes and talking to one another. I think it’s because we all are in the ‘no one will stop our vote today’ mood.'” — Nikki Euell, advertising producer

Voters arriving at two separate polling stations discovered that most scanners had broken down, forcing some people to drop their ballots in “emergency ballot boxes” or vote using an affidavit ballot.

“People are grumpy and frustrated but positive in a weird way, making jokes and talking to one another. I think it’s because we all are in the ‘no one will stop our vote today’ mood,'” said Nikki Euell, an advertising producer who waited more than two hours to vote in Brooklyn’s Greenpoint neighborhood.

City Councilman Brad Lander said he opted to wait at his polling place in a line about 100 people long —so long that workers had rigged up a sign on a broomstick to mark the end of the line — only to learn as he neared the front that the fourth scanner had also broken. He went to the polling site around noon thinking it wouldn’t be crowded, but “it was a mosh pit,” the Democrat said.

There was also confusion in Phoenix, Arizona, after a polling site was foreclosed on overnight. The owners of the property locked the doors, taking election officials by surprise. Voters had been sent to another precinct nearby, but Maricopa County Recorder Adrian Fontes tweeted that the location in Chandler was up and running shortly after 7 a.m. Tuesday. Election workers Mark Bezanson, left, and Julie Olson dump ballots collected earlier in the day from drop boxes onto a table for sorting at the King County Elections office, Monday, Nov. 5, 2018, in Renton, Wash. Voters in Washington all vote only by mail. (AP Photo/Elaine Thompson)

A Florida Precinct Had to Tell Voters to Come Back Later

For about an hour after polls opened Tuesday morning, a Sarasota County, Florida, precinct had to tell voters to come back later because their ballots were not available. Delays were also reported in Houston, Texas, after apparent issues with registration check-in machines at some polling places.

The U.S. Border Patrol also canceled a “crowd control exercise” in Texas that was scheduled for Tuesday, following criticism from civil liberties groups that it could dissuade people from voting.

Border Patrol agent Fidel Baca confirmed Tuesday that the exercise in a Latino neighborhood of El Paso was canceled, but declined to say why. The Texas Civil Rights Project says the exercise, billed by the Border Patrol as a “mobile field force demonstration,” was to be held within a half-mile of a polling site.

There has been concern that last-minute court rulings on voter ID requirements, the handling of absentee ballots and other issues in a handful of states will sow confusion among voters and poll workers. The problems come amid a surge of interest, with registrations and early-voting turnout running well ahead of what is typically seen during a midterm election.

The election marks the first nationwide voting since Russia targeted state election systems in the 2016 presidential race. Federal, state and local officials have been working to make the nation’s myriad election systems more secure. They have beefed up their cybersecurity protections and improved communications and intelligence-sharing.

The U.S. Department of Homeland Security, FBI and other federal agencies have opened a command center to help state and local election offices with any major problems that arise.

There have been no signs so far that Russia or any other foreign actor has tried to launch cyberattacks against voting systems in any state, according to federal authorities. There was also no indication that any systems have been compromised that would prevent voting, change vote counts, or disrupt the ability to tally votes, U.S. officials said.

In Other States Polling Places Have Been Closed or Consolidated

In other states, including Kansas, Election Day polling places have been closed or consolidated, leading to worries that voters will be disenfranchised if they can’t find a way to get there and cast a ballot.

Nationally, some 6,500 poll watchers are being deployed by a coalition of civil rights and voting advocacy groups to assist people who encounter problems at the polls.

DHS officials have boasted that the 2018 midterms will be the most secure election in U.S. history, pointing to federal intrusion-detection sensors that will protect “90 percent of election infrastructure,” as DHS Undersecretary Christopher Krebs tweeted in mid-October. Those sensors sniff for malicious traffic, and are installed on election systems in 45 states.

But similar sensors used at the federal level have performed badly. According to a Sept. 14 letter from the Office of Management and Budget, those sensors had a 99 percent failure rate from April 2017 onward, when they detected only 379 out of almost 40,000 “incidents” across federal civilian networks.

Nationally, some 6,500 poll watchers are being deployed by a coalition of civil rights and voting advocacy groups to assist people who encounter problems at the polls. That’s more than double the number sent to polling places in 2016, while the number of federal election monitors has declined.