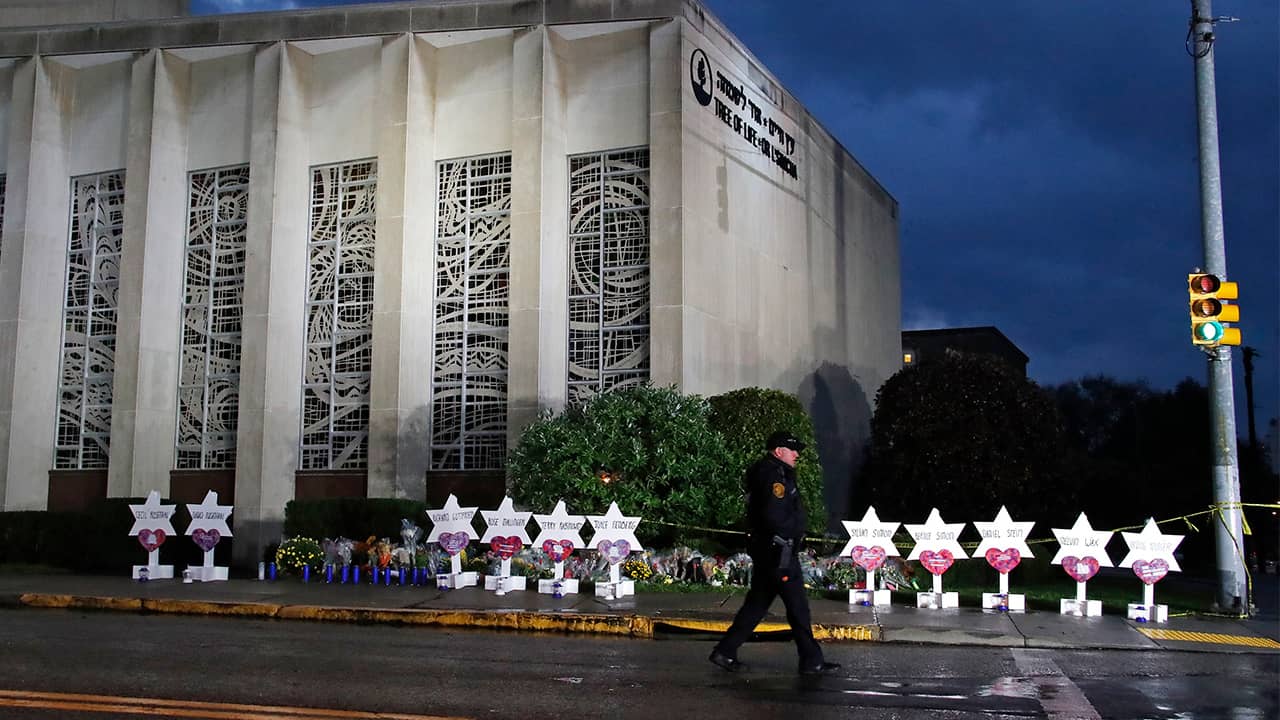 PITTSBURGH — A survivor of the Pittsburgh synagogue massacre described Sunday how he and other terrorized worshippers concealed themselves in a supply closet as the gunman stepped over the body of a man he had just shot and killed, entered their darkened hiding spot and looked around.


“I can’t say anything, and I’m barely breathing. He didn’t see us, thank God.” — Barry Werber, survivor
“I can’t say anything, and I’m barely breathing,” recalled Barry Werber, 76, in an interview with The Associated Press. “He didn’t see us, thank God.”
The gunman, Robert Gregory Bowers, opened fire with an AR-15 rifle and other weapons during worship services inside Tree of Life Synagogue, killing eight men and three women before a tactical police team tracked him down and shot him, according to state and federal affidavits made public on Sunday. He expressed hatred of Jews during the rampage and later told police that “all these Jews need to die,” authorities said.
Six people were injured in the attack, including four officers.
Bowers targeted a building that housed three separate congregations, all of which were conducting Sabbath services when the attack began just before 10 a.m. in the tree-lined residential neighborhood of Squirrel Hill, about 10 minutes from downtown Pittsburgh and the hub of the city’s Jewish community.
As authorities worked to piece together Bowers’ background and movements, harrowing accounts from the survivors began to emerge.

Bowers Shot His Victims With an AR-15

Speaking at a vigil in Pittsburgh on Sunday night, Tree of Life Rabbi Jeffrey Myers said about a dozen people had gathered in the synagogue’s main sanctuary when Bowers walked in and began shooting. He said seven of his congregants were killed.
“My holy place has been defiled,” he said.
Officials released the names of all 11 of the dead, all of them middle-aged or elderly. The victims included intellectually disabled brothers and a husband and wife. The youngest was 54, and the oldest was 97.
“The loss is incalculable,” said Stephen Cohen, co-president of New Light Congregation, which rents space at Tree of Life.
Mayor Bill Peduto called it the “darkest day of Pittsburgh’s history.”
Bowers shot his victims with an AR-15 — the weapon used in many of the nation’s mass shootings — and three handguns, all of which he owned legally and had a license to carry, according to a law enforcement official who wasn’t authorized to discuss the ongoing investigation, and who spoke on Sunday on condition of anonymity.
U.S. Attorney Scott Brady in Pittsburgh said Sunday night that federal prosecutors intend to pursue the death penalty against Bowers. Two people support each other in front of flowers at a makeshift memorial at the Tree of Life Synagogue in Pittsburgh, Sunday, Oct. 28, 2018. Robert Bowers, the suspect in Saturday’s mass shooting at the synagogue, expressed hatred of Jews during the rampage and told officers afterward that Jews were committing genocide and he wanted them all to die, according to charging documents made public Sunday. (AP Photo/Matt Rourke)

Little Else Was Known About the Suspect

Bowers was a long-haul trucker who worked for himself, Brady said.
Little else was known about the suspect, who had no apparent criminal record but who is believed to have expressed virulently anti-Semitic views on social media. It appears Bowers acted alone, authorities said.
The victims included Melvin Wax, a retired accountant in his late 80s who was always one of the first to arrive at synagogue and among the last to leave.

Werber Called the Gunman “A Maniac”

In the basement, four members of New Light Congregation were just starting to pray — with two others in the kitchen — when they heard crashing sounds coming from upstairs, looked out the door and saw a body on the staircase, Werber, the survivor, recalled Sunday in an interview at his home.

A Time of Increasing Anti-Semitism in the U.S.

The massacre came at a time of increasing anti-Semitism in the U.S. Earlier this year, the Anti-Defamation League reported a nearly 60 percent rise in anti-Semitic incidents in 2017 — the largest single-year increase since the ADL began its tracking nearly three decades ago.
Perlman, who also spoke at the vigil Sunday night, said New Light lost three congregants.
“These three men, they cannot be replaced,” said Perlman, his voice breaking. “But we will not be broken. We will not be ruined.”
Bowers was charged with 11 state counts of criminal homicide, six counts of aggravated assault and 13 counts of ethnic intimidation in what the leader of the Anti-Defamation League called the deadliest attack on Jews in U.S. history.
He was also charged in a 29-count federal criminal complaint that included counts of obstructing the free exercise of religious beliefs resulting in death — a federal hate crime — and using a firearm to commit murder.
Bowers, who underwent surgery and remained hospitalized, is scheduled to appear in court Monday. It wasn’t clear whether he had an attorney to speak on his behalf. A message left with the federal public defender’s office in Pittsburgh wasn’t immediately returned.

Of the Six Survivors, Four Remained in the Hospital

Of the six survivors, four remained in the hospital Sunday night, and two — including a 40-year-old officer — were listed in critical condition.
The nation’s latest mass shooting drew condemnation and expressions of sympathy from politicians and religious leaders of all stripes.
Pope Francis led prayers for Pittsburgh in St. Peter’s Square.
“In reality, all of us are wounded by this inhuman act of violence,” he said. He prayed for God “to help us to extinguish the flames of hatred that develop in our societies, reinforcing the sense of humanity, respect for life and civil and moral values.”
German Chancellor Angela Merkel’s spokesman quoted Merkel on Twitter as offering her condolences and saying that “all of us must confront anti-Semitism with determination — everywhere.”