California is politically lopsided: Most of the people live in the south, but most of the political power is based in the north. 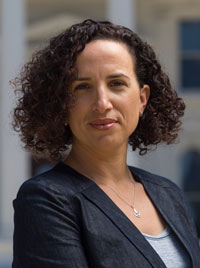 “There is some built-in disadvantage for statewide candidates coming from the Los Angeles area.” — Mark Baldassare, president of the Public Policy Institute of California

For the last several years, the majority of politicians elected statewide have been northern Californians—including the governor, lieutenant governor, schools superintendent and both U.S. senators.

That could change after November’s election, because a striking number of statewide races this year pit a NorCal candidate against SoCal candidate, testing the political power and competing priorities of the Golden State’s two most populous regions.

But don’t count on it.

Northern California is likely to continue to dominate for reasons that largely boil down to this: People in the Bay Area just vote a lot more than those in Los Angeles. Economic and demographic changes overlap with voting trends, together situating California’s political nucleus in the heavily Democratic region in and around San Francisco.

“There is some built-in disadvantage for statewide candidates coming from the Los Angeles area,” said Mark Baldassare, president of the Public Policy Institute of California.

Voter Turnout Is Disappointing in L.A.

“The voter turnout and participation is disappointing in L.A., compared to the rest of the state.”

“It’s a tale of two economies. Where you have a declining middle class, you have fewer voters and less civic participation.” — Mike Madrid, a GOP political consultant

Even though Los Angeles is the state’s most populous county, it has the lowest turnout rate for registered voters. Of the 58 counties, L.A.’s turnout was dead last in the 2014 election and second-to-last in the June primary. Participation is so abysmal in Los Angeles County that voters there actually cast fewer ballots than voters in the nine-county San Francisco Bay Area—even though Los Angeles County has 1.2 million more people registered to vote.

Turnout is better in other populous SoCal counties such as Orange and San Diego, but still not as strong as in the Bay Area.

“It’s a tale of two economies. Where you have a declining middle class, you have fewer voters and less civic participation,” said Mike Madrid, a GOP political consultant with expertise in Latino voting trends.

Southern California is home to a greater share of Latinos than the Bay Area, and has many more people living in poverty—both characteristics correlated with low voting. Per-capita income is much higher in the Bay Area and jobs there are being created faster. That not only means people are more likely to vote but also gives candidates from the region a stronger network for fundraising.

“As the economy has separated, so has our democracy,” Madrid said. “The nine-county Bay Area is becoming whiter, wealthier and older. And that’s creating a power base that is driving the political leadership and discourse for the rest of the state.”

Voters Don’t Always Choose Candidates From Their Own Region

Of course, voters don’t always choose the candidate from their own region, and a home address in the Bay Area is no guarantee of a candidate’s success. Other factors—such as politics, fundraising and the power of incumbency—also come into play.

But with seven of the nine statewide races on November’s ballot featuring a north-south matchup, the question now is whether voters will defy the recent trend.

In the race for governor, the dominance of Northern California was clear when the primary was over in June. Lt. Gov. Gavin Newsom, the former mayor of San Francisco, beat out two fellow Democrats from Los Angeles to face Republican John Cox of San Diego on the November ballot. Newsom is far ahead in the polls and in fundraising in a state where just one-quarter of voters are registered GOP.

Given their advantage in voter registration and fundraising, Democrats—no matter which end of the state they live in—are favored to win in statewide contests against Republicans. One test will be in the race for insurance commissioner, which features a Democratic legislator from Los Angeles against a Silicon Valley entrepreneur who is running with no party preference. Steve Poizner, who was insurance commissioner from 2006-2010, used to be a Republican but changed his registration to run this year. He splits his time between Silicon Valley and San Diego, and is facing state Sen. Ricardo Lara, a Los Angeles Democrat, in this down-ticket race. 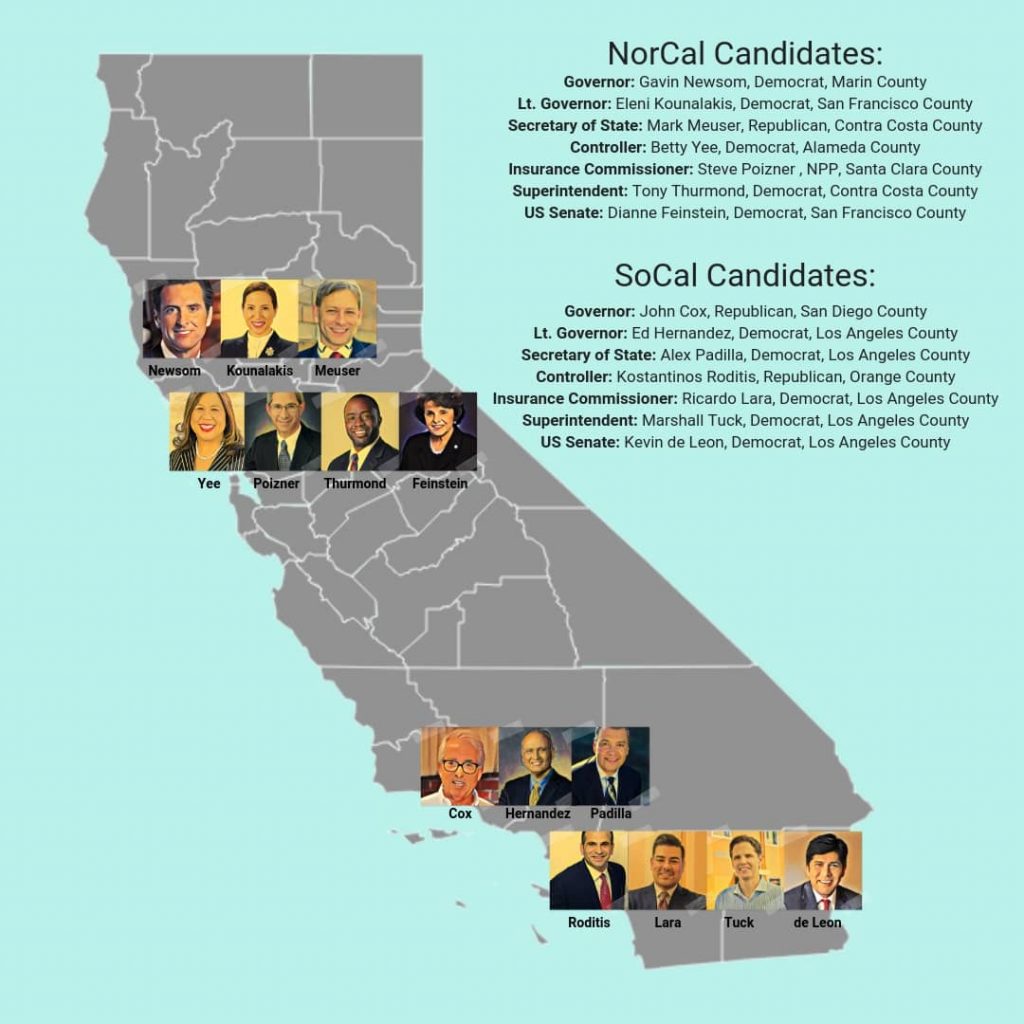 “All else equal in terms of platform, and political leanings, if you have connections to the Bay Area, that is considered to be an advantage.” — Mindy Romero, director of the California Civic Engagement Project at the University of Southern California

They could pick a statewide schools superintendent who hails from the Bay Area—Assemblyman Tony Thurmond—or one who helped run schools in Los Angeles, Marshall Tuck. U.S. Sen. Dianne Feinstein—a former mayor of San Francisco—is fighting a challenge from the left from state Sen. Kevin de León, a Democrat from Los Angeles.

“All else equal in terms of platform, and political leanings, if you have connections to the Bay Area, that is considered to be an advantage,” said Mindy Romero, director of the California Civic Engagement Project at the University of Southern California.

The dynamic is different for legislative races—where the state is broken into districts with equal populations. Southern California’s large population means the region has many representatives in the Legislature, including the leaders of both the Senate and the Assembly.

Having a Lot of Those Swing Seats

But because of the voting trends, many SoCal lawmakers are elected with fewer votes than their NorCal colleagues. Even though Assembly Speaker Anthony Rendon, who lives in Los Angeles County, is one of the state’s most powerful politicians, he was elected by about 89,000 voters in 2016, while several Bay Area legislators got at least 130,000 votes.

Mike Trujillo, a Democratic political consultant in Los Angeles, said he’s hoping the energy this year over control of Congress will prompt more Southern Californians to vote. With several contested House races, the region is being blitzed by ads and volunteers reminding people an election is coming up.

“We do have a lot of those swing seats,” he said. “We’re hoping that is influential.”