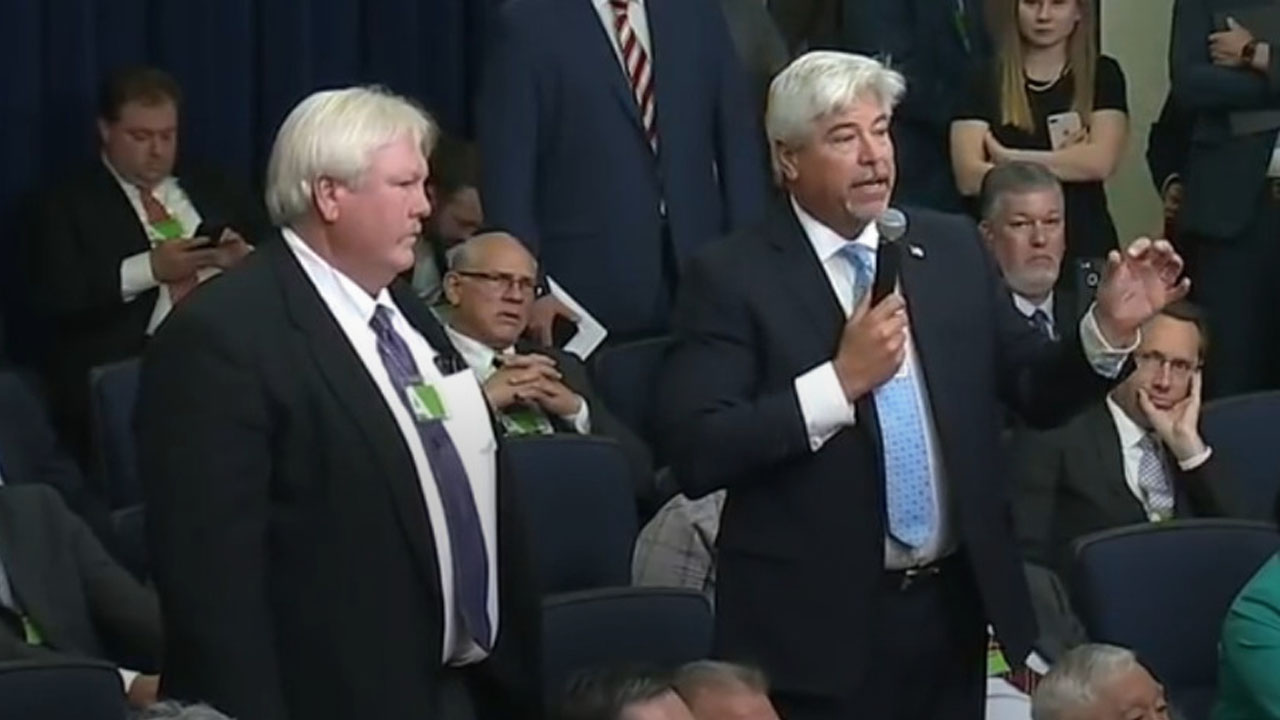 That’s when he noticed two men in the crowd.
“You people are nodding like you know exactly what I’m talking about,” Trump said.
Trump then started interacting with Craig Pedersen and Doug Verboon, who serve on the Kings County board.
“Unfortunately, for me, because of a lack of water, three generations — my family, we sold the farm two years ago because of a lack of water,” Pederson told Trump. “So we just can’t thank you enough. You kept your campaign commitment to help us.”
Verboon talked about the challenges of purchasing water.
“So I had to pay $6,000 an acre-foot to buy this water. So over a million dollars to farm 187 acres,” he said. “That doesn’t make any sense. So it created another industry. So now some people in the Southern California are paying $5,000 an acre-foot for water when they shouldn’t be paying that. It’s too much money.”

“You people are nodding like you know exactly what I’m talking about.” — President Trump to Craig Pederson and Doug Verboon
Verboon said the president’s appearance at the event was a last-minute surprise. So was getting called upon.
“We had an opportunity, and we took advantage of it. Hopefully, we represented well,” he said.
Naturally, Verboon talked to his family about the chance conversation.
“I called my wife. And she said, ‘You mean the real president?’ ”
Later in the day, the president signed the America’s Water Infrastructure Act.
(Click on the image above to watch the video.)

The Fresno City Council will hear an update from the mayor’s Citizens’ Public Safety Advisory Board at Thursday’s (Oct. 25) meeting. The group worked on two main issues in the first quarter —  crafting a policy on the release of body camera video footage, and analyzing a recent survey of sworn and non-sworn police department employees.

“If you are willing to say this is a good place to work, I think we’re doing OK.” — FPOA President Damon Kurtz
A preview of the presentation available in council documents reveals that the advisory board isn’t ready to make specific recommendations.
However, the board has concerns about the results of the May 2018 police department survey.
The 30-question survey asked officers and civilian members of the department their opinions on working there. For the most part, employees gave the department positive reviews.
“Overall it was fairly positive, compared to the 2014 survey,” said Damon Kurtz, president of the Fresno Police Officers Association, which conducted the survey.

Some notable answers:
— 68% of sworn personnel indicated that low morale is a problem.
But Kurtz said that response comes with a caveat.
“That is a subjective question. However, recommendations are high,” he said.
Kurtz referred to the fact that 67% of sworn personnel would recommend to friends and relatives that they work for Fresno PD. Even more, 89%, are satisfied with job stability.
“If you are willing to say this is a good place to work, I think we’re doing OK,” Kurtz said.
— 49% of sworn personnel answered that the department “supports its employees’ well-being and work/life balance.”
“We’ve been understaffed for years now, we’re doing more with less. That is a reflection of the workload. It deals with requests for days off. You just can’t because the staffing is not there,” Kurtz said.
— 51% said that “information passed through the chain of command is accurate and timely.”
“It’s like the game ‘Telephone,’ ” Kurtz said. “You’re in a large governmental agency. Sometimes the message doesn’t always reach the bottom. It’s like that in any organization.”
A follow-up survey is scheduled for next year.
It should also be noted that the citizens’ advisory board has lost two of its inaugural members.
Amy Guerra resigned after being named a Fresno County Superior Court judge by Gov. Jerry Brown. Clifford Williams resigned because of scheduling conflicts.
And, according to attendance records, Avis Braggs has not attended the CPSAB monthly meetings since June. Michael Vang last attended a meeting in July.

For the second time in a week, the council is scheduled to discuss how to fix an error in the Measure P ballot language. Voters will decide on the sales tax increase to benefit parks, trails and cultural arts on Nov. 6.
The council canceled a Monday meeting when not enough members attended. The item is rescheduled for Thursday.
Members are set to discuss a plan to mail corrections. City staff has yet to provide a cost estimate.
The ballot language council passed in August never made it to the actual ballot, in what is being called a “clerical error.” An earlier version of the language will appear instead.
Council will also talk about asking the Fresno County elections clerk to post the updated version at polling places. If the clerk refuses, the case could wind up in court.

It’s been a while since Politics 101 examined the financial figures of the six candidates running for the Fresno City Council. Here is an update: