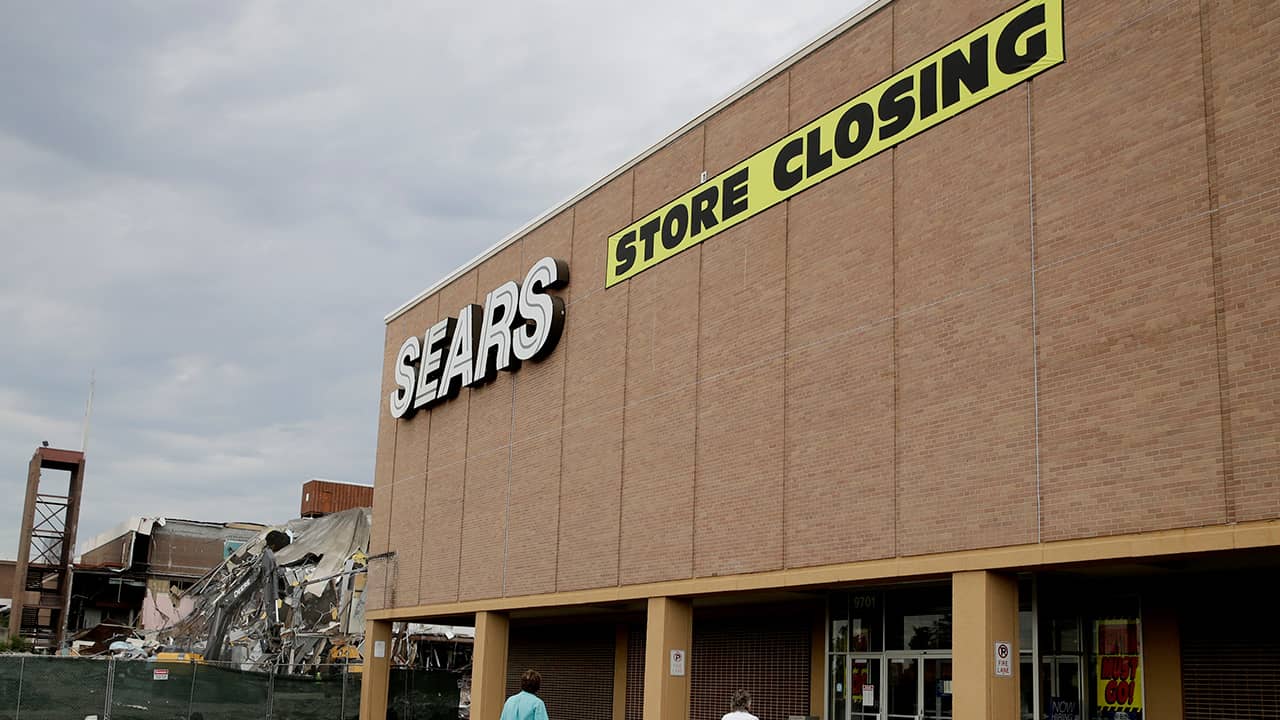 NEW YORK — Sears filed for Chapter 11 bankruptcy protection Monday, with plans to shutter 142 unprofitable stores in the hopes that it can stay in business.

Struggling With Outdated Stores and Complaints About Customer Service

The company has struggled with outdated stores and complaints about customer service even for its once crown jewels: major appliances like washers and dryers. That’s in contrast with chains like Walmart, Target, Best Buy and Macy’s, which have been enjoying stronger sales as they benefit from a robust economy and efforts to make the shopping experience more inviting by investing heavily in remodeling and de-cluttering their stores.
Sears Holdings, which operates both Sears and Kmart stores, will close the 142 stores near the end of the year and liquidation sales are expected to begin shortly. That’s in addition to the closure of 46 unprofitable stores that had already been announced.
Edward S. Lampert, the company’s largest shareholder, has stepped down as CEO but will remain chairman of the board. A new Office of the CEO will be responsible for managing day-to-day operations.
The company said Monday it has secured $300 million in financing from banks to keep the operations going through bankruptcy. It’s negotiating an additional $300 million loan from Lampert’s ESL Hedge fund.
The filing listed between $1 billion and $10 billion in assets while liabilities range between $10 billion to $50 billion. It listed the Pension Benefit Guarantee Corp., the federal agency that insures pensions, as Sears’ biggest unsecured creditor, but noted the amount it owed as “unknown,” according to court documents. 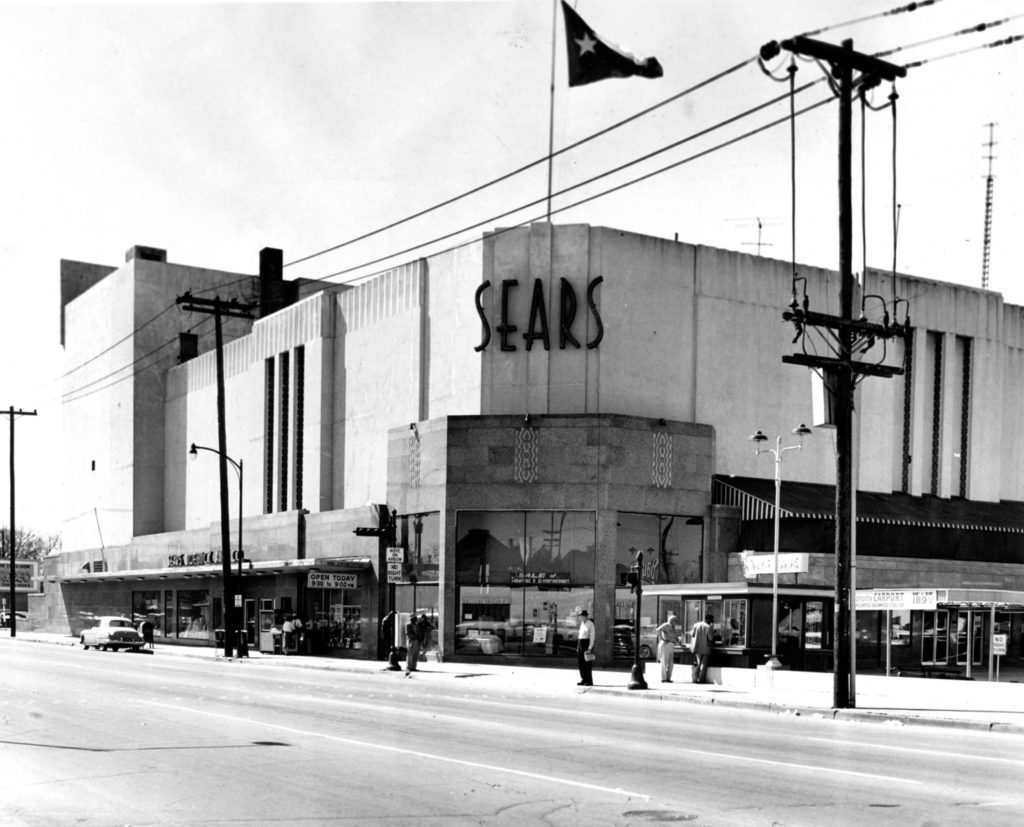 FILE – This March 1, 1959, file photo shows a Sears building in downtown Houston. Sears has filed for Chapter 11 bankruptcy protection Monday, Oct. 15, 2018, buckling under its massive debt load and staggering losses. The company once dominated the American landscape, but whether a smaller Sears can be viable remains in question. (Houston Chronicle via AP, File)

Sears joins a growing list of retailers that have filed for bankruptcy or liquidated in the last few years amid a fiercely competitive climate. Some, like Payless ShoeSource, successfully emerged from reorganization in bankruptcy court. But plenty of others like, Toys R Us and Bon-Ton Stores Inc., haven’t. Both retailers were forced to shutter their operations this year soon after Chapter 11 filings.
Given its sheer size, Sears’ bankruptcy filing will have wide ripple effects on everything from already ailing mall landlords to its tens of thousands of workers. But unlike other retailers that have gone bankrupt, there are not a lot of spoils for rivals to pick up. The company, once a big seller of toys, now has a tiny 2 percent market share in that area, according to investment research firm Jefferies. And its market share in major appliances has shrunk to just under 10 percent from 41 percent in 2001, according to Johnson of Customer Growth Partners.
Lampert has been loaning out his own money for years and has put together deals to prop up the company, which in turn has benefited his own ESL hedge fund.
Last year, Sears sold its famous Craftsman brand to Stanley Black & Decker Inc., following earlier moves to spin off pieces of its Sears Hometown and Outlet division and Lands’ End.
In recent weeks, Lampert has been pushing for a debt restructuring and offering to buy some of Sears’ key assets, like Kenmore, through his hedge fund as a $134 million debt repayment came due on Monday. Lampert personally owns 31 percent of the company’s shares, while his hedge fund has an 18.5 percent stake, according to FactSet.

Stock Has Fallen From About $6 Over the Past Year

Sears’ stock has fallen from about $6 over the past year to below the minimum $1 level that Nasdaq stocks are required to trade in order to remain on the stock index. In April 2007, shares were trading at around $141.

“If they don’t value a customer, then they don’t need my money,” Roberts said. 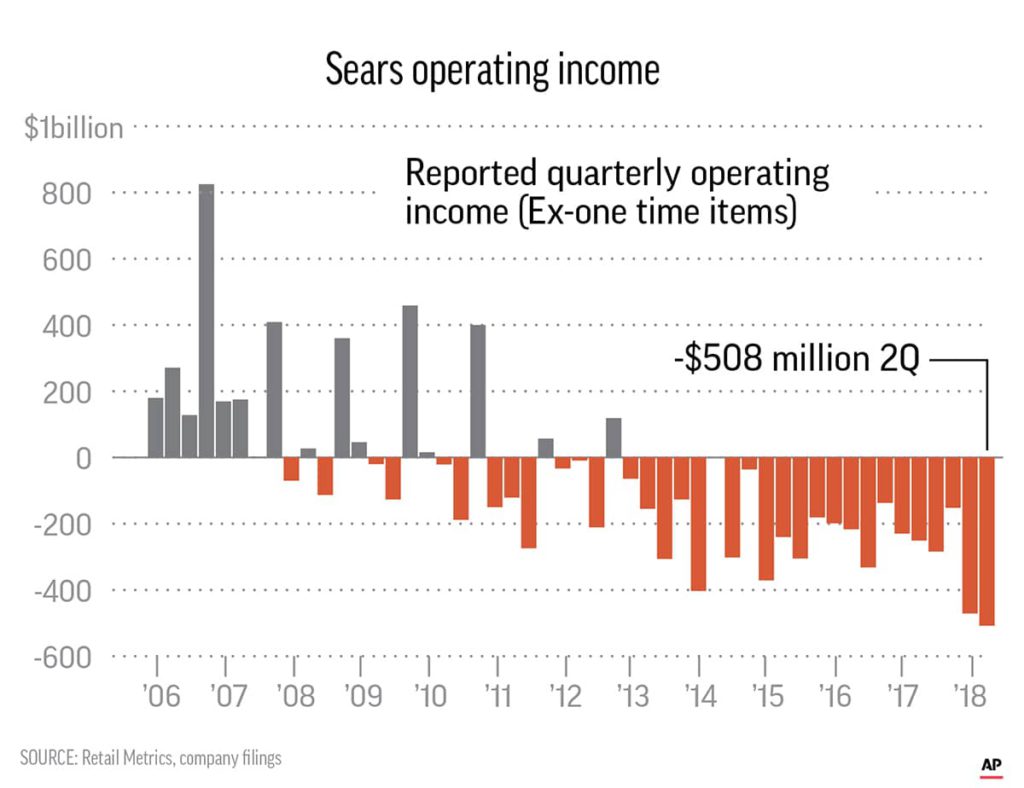 For well over a century Sears has dominated the american retailing industry.

Store Shelves Have Been Left Bare

Store shelves have been left bare as many vendors have demanded more stringent payment terms, says Mark Cohen, a professor of retailing at Columbia University and a former Sears executive.
Sears said it intends to pay workers’ wages and benefits without interruption. Sears plans to hold a meeting for its employees at its corporate headquarters and other corporate locations on Tuesday.
But Sears workers are nervous about what kind of severance they’ll receive if their stores close.
John Germann, 46, works full-time and makes $14 per hour as the lead worker unloading merchandise from trucks at the Chicago Ridge, Illinois, store, which has been drastically reducing its staff since he started nine years ago. Germann now has only 11 people on his team, compared with about 30 a few years ago.
“We’re doing the job of two to three people. It’s not safe,” he said. “We’re lifting treadmills and refrigerators.”