Lock Her Up? Now It's Dianne Feinstein Instead of Clinton 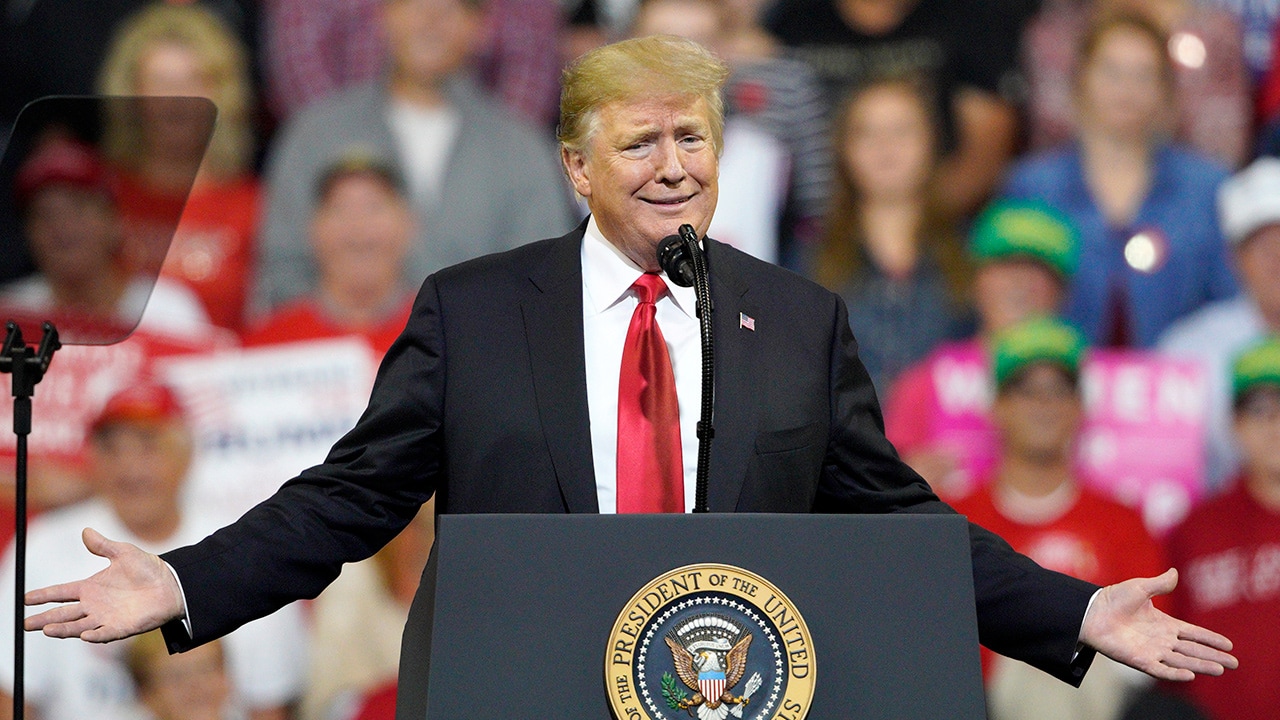 COUNCIL BLUFFS, Iowa — Chants of “Lock her up!” rang once again throughout an Iowa arena as President Donald Trump rallied supporters Tuesday night.


“Did she leak that? 100 percent. I don’t want to get sued, so 99 percent.” — President Donald Trump
But this time, the staple of Trump’s 2016 campaign against Democrat Hillary Clinton had a new target: California Sen. Dianne Feinstein.
Trump, who was in the state boosting Republican candidates ahead of the Nov. 6 midterm elections, claimed that Feinstein, the ranking Democratic member of the Senate Judiciary Committee, had leaked a letter written by California professor Christine Blasey Ford alleging Supreme Court Justice Brett Kavanaugh had sexually assaulted her when they were teenagers.
Feinstein has denied her office was the source of the leak.
“Can you believe that?” Trump said, as his supporters turned the chant once deployed against the former secretary of state on another Democratic woman.
“Did she leak that? 100 percent,” Trump said, adding, “I don’t want to get sued, so 99 percent.” In a statement, Feinstein called Trump’s remarks “ridiculous and an embarrassment.”

Ford Had Sought to Remain Anonymous

Ford had sought to remain anonymous when she brought the allegation against Kavanaugh to Feinstein’s attention. She later went public after reporters started trying to contact her. Kavanaugh staunchly denied Ford’s accusation.
“Dr. Blasey Ford knows I kept her confidence, she and her lawyers said so repeatedly,” Feinstein said. “Republican senators admit it. Even the reporter who broke the story said it wasn’t me or my staff.”


“Dr. Blasey Ford knows I kept her confidence, she and her lawyers said so repeatedly. Republican senators admit it. Even the reporter who broke the story said it wasn’t me or my staff.” — California Sen. Dianne Feinstein
The rally in Council Bluffs, across the Missouri River from Omaha, Nebraska, was Trump’s latest stop on a busy tour campaigning for Republican candidates in the lead-up to midterms that will determine control of Congress. And it comes as the president is on a high wave following a series of wins, including Kavanaugh’s confirmation. It’s the second appointment Trump has made to the Supreme Court.
Indeed, Trump’s loudest applause came as he continued his victory lap, which has included bashing Democrats for attempting to sink the nomination. Trump and other GOP leaders say the effort energized Republican voters, who had long been considered less energized than Democrats.
“This is truly an historic week for America,” said Trump, praising Republican senators for standing up to what he called “the Democrats’ shameful campaign of political and personal destruction” against his nominee.
“They wanted to destroy that man,” Trump said. “What the Democrats did to Brett and his family is a national embarrassment, a national disgrace.”
Trump also rolled out new fuel standards that will be a boon for Iowa and other farm states that have pushed for greater ethanol sales. The long-expected change will lift the federal ban on summer sales of gasoline with high-ethanol blends and allow them year-round. The EPA currently bans the high-ethanol blend, called E15, during the summer because of concerns that it contributes to smog on hot days. Ethanol industry advocates say that fear is unfounded.

Speaking to a crowd of thousands, Trump said he was delivering a promise he’d made to Iowa voters years ago when he campaigned ahead of the state’s caucuses.
“Promises made, promises kept,” he said. He charged without offering evidence that if Democrats take control of Congress next month, they will seek to roll back his efforts.
The move was also seen as a reward for Republican Sen. Chuck Grassley of Iowa, the Senate Judiciary Committee chairman who led Kavanaugh’s contentious but successful confirmation fight. Trump praised Grassley on Tuesday night as a “tough cookie” as he applauded local leaders including Iowa’s Republican Rep. David Young and Gov. Kim Reynolds, who face tough re-election fights.
Trump also boosted Nebraska Rep. Don Bacon and Nebraska Gov. Pete Ricketts, who face voters next month. The pair received loud applause from the heavily Nebraskan crowd.
Early voting in Iowa began on Monday, and Trump urged those gathered to cast their ballots now. “Go! Just vote. Get it over with,” he urged.
Early voting accounted for 41 percent of the Iowa vote in 2016, according to the White House.