Fresno Parks Boosters Off to Fast Start With Campaign Donations 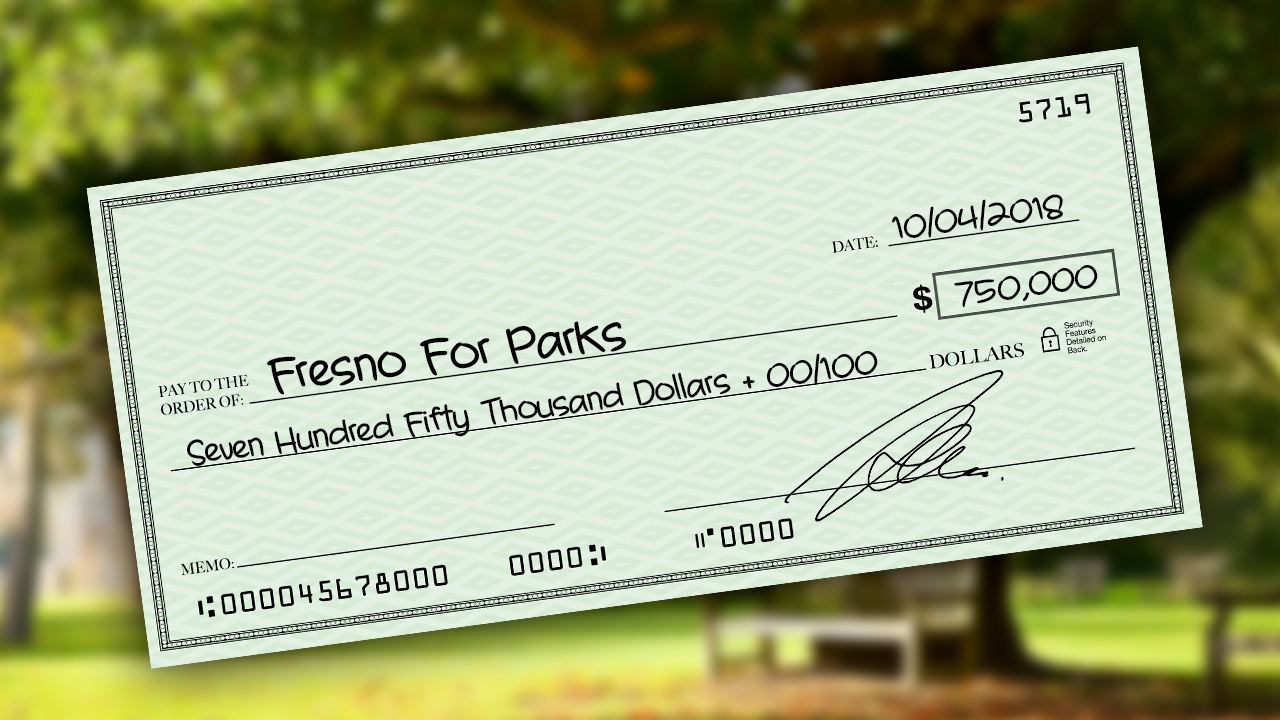 Supporters of a Fresno sales tax increase to benefit parks have raised three-quarters of a million dollars, according to the latest financial filings.
The Yes on P committee raised $545,000 during the latest filing period, covering July 1-Sept. 22. Central Valley Community Foundation, the Ashley Swearengin-led group spearheading the campaign, provided the largest donation at $100,000 in the time period. For the year, the foundation has given $300,600.

The Lyles Foundation chipped in $150,000. The San Joaquin River Parkway and Conservation Trust donated $32,320. Measure P would provide an estimated $4.2 million annually for the parkway and improving walking and biking trails.
The five-figure individual donors include Paul Gibson, formerly of Guarantee Real Estate, $50,000; his mother-in-law Virginia Eaton, $25,000; rancher/philanthropist Rodger B. Jensen, $25,000; Jolene Telles, $11,000; conservation activist Coke Hallowell $10,000; and John Harris of Harris Ranch, $10,000.
Meanwhile, the No on P camp began with a $5,000 donation but has added nearly $84,500 from large donors recently, including $15,000 from the Fresno Police Officers Association.
Interestingly, no filings have appeared from some of the more well-known opponents — the Fresno Chamber of Commerce, and the union representing Fresno firefighters.

With a Bang, Yang and Chavez Debate

Paula Yang entered a forum for the Fresno City Council with a full entourage. Supporters chanted her name, drums banging out a marching cadence. Yang continued the loud and proud tone as she and Luis Chavez told a crowd of about 80 about their District 5 campaigns.
Most of the questions focused on immigration and environmental issues. That is not surprising since Fresno Building Healthy Communities and other advocacy groups hosted the event at the Mosqueda Center Tuesday (Oct. 2) night.

Chavez said he’s done the most for immigrants among any councilperson. He said that the council will form an immigrant advisory committee that includes Esmeralda Soria and Oliver Baines.
Yang countered that Chavez did not support the city spending on an immigrant fund. She also got fired up when talking about the Summerset apartment complex, which provided the impetus for the city to create a rental inspection program. She said she wants to turn the old juvenile hall into a homeless shelter.
When asked about land development, Yang wants developers to meet with city planners in “public arenas.” Chavez touted his support for Ulta and Amazon, noting the increase in local jobs. He also mentioned Amazon raising its minimum wage to $15 an hour.
Yang downplayed how long she’s lived in the district. After Chavez said he’s been in District 5 for 25 years, Yang responded, “The requirement does not mean you have to live here for 25 years in order to qualify. It says merely you have to have a home here.”
Toward the end of the forum, things turned rowdy. Chavez tried to rebut a Yang point, which deviated from the forums rules (“this is a forum, not a debate,” moderator Ivanka Saunders reminded Chavez). Many Yang supporters, including her husband Mike Carmona, razzed Chavez from the back of the room.

GV Wire is hosting a Measure P forum on Thursday, Oct. 11 starting at 6 pm. Representatives from the campaigns in support and opposed to Measure P will participate. The forum will be held in the multi-purpose room at the Islamic Cultural Center of Fresno, 2111 E Nees Ave. in Fresno.
GV Wire also will host a forum with the six candidates in the three contested council races at 6:30 p.m. Tuesday, Oct. 16, at the Fresno City College Old Administration Building auditorium.
The public is invited to attend both forums.

Want to Buy a Baseball Team?

The Visalia Rawhide have announced the team is for sale.
The current ownership group, Top of the Third, led by cousins Tom Seidler and Kevin O’Malley, bought the team in 2002. It is the longest running ownership in team history.
Seidler is also an executive with the Padres. His brother is part of the group that owns the team.
“I was a hands-on president/general manager (of the Rawhide) for six years (2006-2012). When my brother Peter (and co-owner Ron Fowler) put together a deal to buy the Padres, I got a chance to take on a new challenge and move to San Diego. I became less involved (with the Rawhide),” said Seidler, who has a 1-year-old son at home.
“Professional and personal responsibilities I have in San Diego don’t let me get to Visalia as much as I had before. Now, is a good time to get someone to come in with the energy I used to have here and be a hands-on president,” Seidler continued.
The team enlisted Santa Monica-based investment bank Park Lane to handle the sale. Park Lane specializes in brokering sports team transactions. Seidler said there is no rush to sell the team, but would not reveal an asking price, or how much be bought the team in 2002.
Visalia city officials praised Seidler.
“I wouldn’t say that it comes as a surprise, but we’ll miss the relationship. Tom was more engaged than any other owner before. He’s worked with us in major improvements of Recreation Park,” Mario Cifuentez, Visalia’s deputy city manager said.
Keeping the team in Visalia is important to Seidler.
“Without a doubt, an awful lot of hard work and collaboration with the city and the club and the business community have taken place, to build it up to where it is a great jewel of a franchise. I don’t think anyone would come here and want to move it. This is a really special place,” Seidler said.
The California League (Single-A) team is an affiliate of the Arizona Diamondbacks.
Related Topics:campaign donationsFresno parksLuis ChavezNo on PPaula Yangsales tax
Up Next