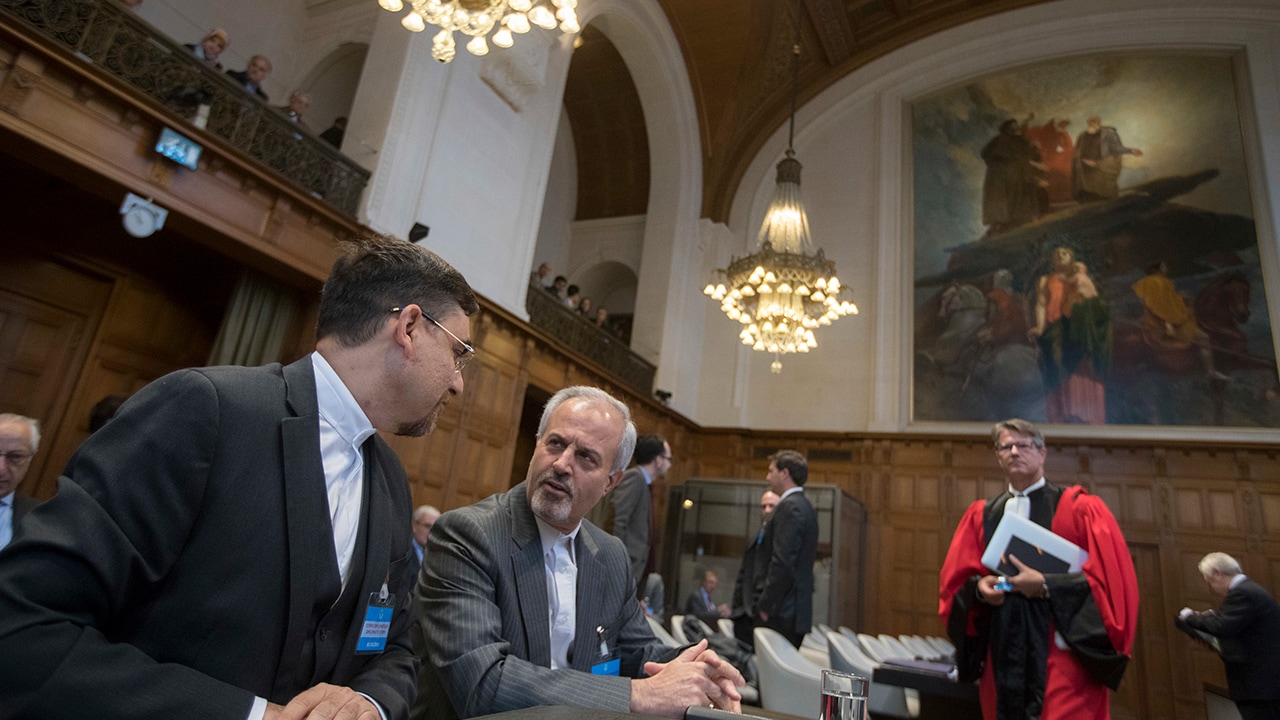 THE HAGUE, Netherlands — The United Nations’ highest court on Wednesday ordered the United States to lift sanctions on Iran that affect imports of humanitarian goods and products and services linked to civil aviation safety.
The ruling by the International Court of Justice is legally binding, but it remains to be seen if the administration of President Donald Trump will comply.
Trump moved to restore tough U.S. sanctions in May after withdrawing from Tehran’s nuclear accord with world powers. Iran challenged the sanctions in a case filed in July at the International Court of Justice.
In a preliminary ruling, the court said that Washington must “remove, by means of its choosing, any impediments arising from” the re-imposition of sanctions to the export to Iran of medicine and medical devices, food and agricultural commodities and spare parts and equipment necessary to ensure the safety of civil aviation.
By limiting the order to sanctions covering humanitarian goods and the civil aviation industry, the ruling did not go as far as Iran had requested.

The U.S. ambassador to the Netherlands, Peter Hoekstra, pointed that out in a tweet. “This is a meritless case over which the court has no jurisdiction,” the ambassador tweeted. “Even so, it is worth noting that the Court declined today to grant the sweeping measures requested by Iran. Instead, the Court issued a narrow decision on a very limited range of sectors.”


“This is a meritless case over which the court has no jurisdiction. Even so, it is worth noting that the Court declined today to grant the sweeping measures requested by Iran.” — Peter Hoekstra, U.S. ambassador to the Netherlands
While imposing the so-called “provisional measures,” the court’s president, Abdulqawi Ahmed Yusuf, stressed that the case will continue and the United States could still challenge the court’s jurisdiction.
Iran’s Foreign Minister Mohammad Javad Zarif praised the court ruling on Twitter, calling it “another failure for sanctions-addicted” U.S. and a “victory for rule of law.”
He added that it is imperative for the international community “to collectively counter malign US unilateralism.”
Iranian state television trumpeted the court’s decision in a scrolling graphic at the bottom of TV screens: “The victory of Tehran over Washington by the Hague Court.”
No date has been set for further hearings in the case.

Tehran Sought the Suspension of Sanctions

At hearings in August, Tehran sought the suspension of sanctions while the case challenging their legality is being heard — a process that can take years. U.S. lawyers responded that the sanctions are a legal and justified national security measure that cannot be challenged by Tehran at the world court.

Iran alleges that the sanctions breach a 1955 bilateral agreement known as the Treaty of Amity that regulates and promotes economic and consular ties between the two countries.
The treaty was signed when the U.S. and Iran were still allies following the 1953 revolution — fomented by Britain and the U.S. — that ultimately cemented the rule of Shah Mohammad Reza Pahlavi.
Diplomatic relations were severed following the 1979 Islamic Revolution in Iran and takeover of the U.S. Embassy and ensuing hostage crisis. However, the treaty remains in force.
Wednesday’s ruling could set up another clash between the Trump administration and a Hague-based court. Last month, Trump’s national security advisor, John Bolton, denounced the International Criminal Court — a separate and unrelated institution based just a few kilometers (miles) away from the International Court of Justice.
The ICC prosecutes people accused of war atrocities while the ICJ settles disputes between nations.
Bolton said last month that “for all intents and purposes, the ICC is already dead to us.”