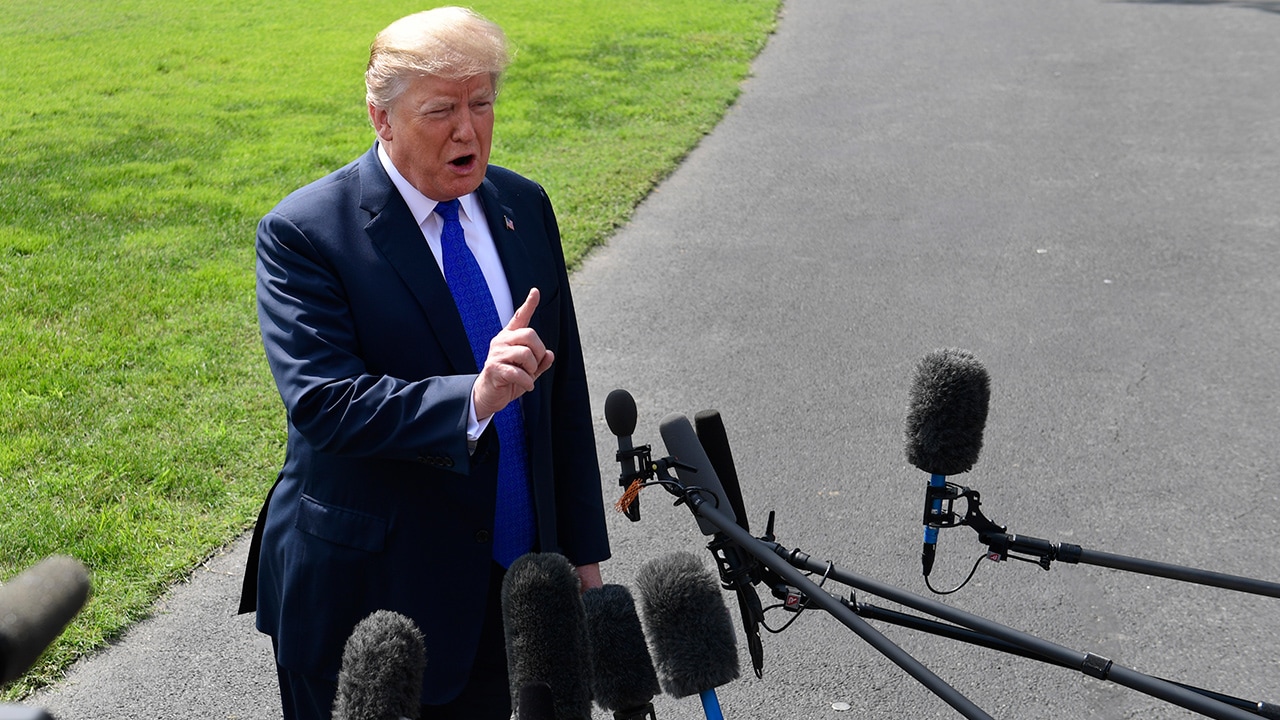 WASHINGTON — Two wavering Republican senators lambasted President Donald Trump on Wednesday for mocking a woman who has claimed Brett Kavanaugh sexually assaulted her in the 1980s, underscoring the risks of assailing Kavanaugh’s three accusers as Senate support teeters for the Supreme Court nominee.


“I had one beer — that’s the only thing I remember.” — President Donald Trump
The blowback to Trump’s scoffing at Christine Blasey Ford came as lawmakers awaited results of a revived FBI background check, expected imminently, on accusations of sexual misconduct by Kavanaugh in high school and college. Senate Majority Leader Mitch McConnell, R-Ky., has said the chamber will vote on Kavanaugh later this week, and the conservative jurist’s fate is in the hands of a handful of undecided GOP and Democratic senators.
At a political rally in Mississippi Tuesday night, Trump mimicked Ford’s responses at a Senate Judiciary Committee hearing last week at which she recounted Kavanaugh’s alleged attack on her when both were in high school. The audience laughed as Trump, at times inaccurately, recounted what he described as holes in her testimony.
“I had one beer — that’s the only thing I remember,” Trump said.
On NBC’s “Today” show Wednesday, Sen. Jeff Flake, R-Ariz., said that ridiculing “something this sensitive at a political rally is just not right.” Flake added, “I wish he hadn’t done it. It’s kind of appalling.”


“The president’s comments were just plain wrong.” — Sen. Susan Collins, R-Maine
Trump’s comments about Ford reflected a growing frustration among some in the White House, and by the president, that her story has not received the same level of scrutiny as Kavanaugh’s, said a person close to the process who was not authorized to speak publicly.
As he flew aboard Air Force One to the Mississippi rally, Trump was also enraged by stories in The New York Times about Kavanaugh’s high school and college years and alleging tax avoidance efforts by the president and his family, according to a person familiar with the situation who spoke on the condition of anonymity.
White House counselor Kellyanne Conway on Wednesday echoed the president’s newly aggressive approach. She said Ford has “been treated like a Fabergé egg by all of us, beginning with me and the president.” She said Trump was merely “pointing out factual inconsistencies.”
“Have a vote on the man,” Conway said of Kavanaugh. “Vote him up or down.”
Trump’s criticism of Ford seems to reflect the sentiments of some of his conservative supporters. But it raises questions about how such words will affect five senators — all moderates — whose votes on Kavanaugh will be decisive.

Preparing to Vote on Kavanaugh as Soon as This Weekend

Besides Flake and Collins, Republican Lisa Murkowski of Alaska and Democrats Joe Manchin of West Virginia and Heidi Heitkamp of North Dakota have yet to declare their positions on Kavanaugh.
Flake has clashed repeatedly with Trump over his behavior and is retiring at year’s end. Collins has criticized Trump at times as well but not as often as Flake.
McConnell told reporters Tuesday that “I can tell you with certainty” that the FBI report will be finished and the Senate will vote this week, though he didn’t specify when.
Senators are preparing to vote on Kavanaugh as soon as this weekend — and prepared for it to be a close. Vice President Mike Pence, who would be brought in to break a tie, is due to campaign Monday in Texas for both Sen. Ted Cruz and Rep. Pete Sessions, but officials with both campaigns braced for changes.
Democrats contend the investigation has not been expanded to sufficient potential witnesses. Senate Minority Leader Chuck Schumer, D-N.Y., has said he wants senators to receive an FBI briefing on its findings at least 24 hours before the chamber takes its first procedural vote on Kavanaugh, but Republicans have given no sign of assenting to that. 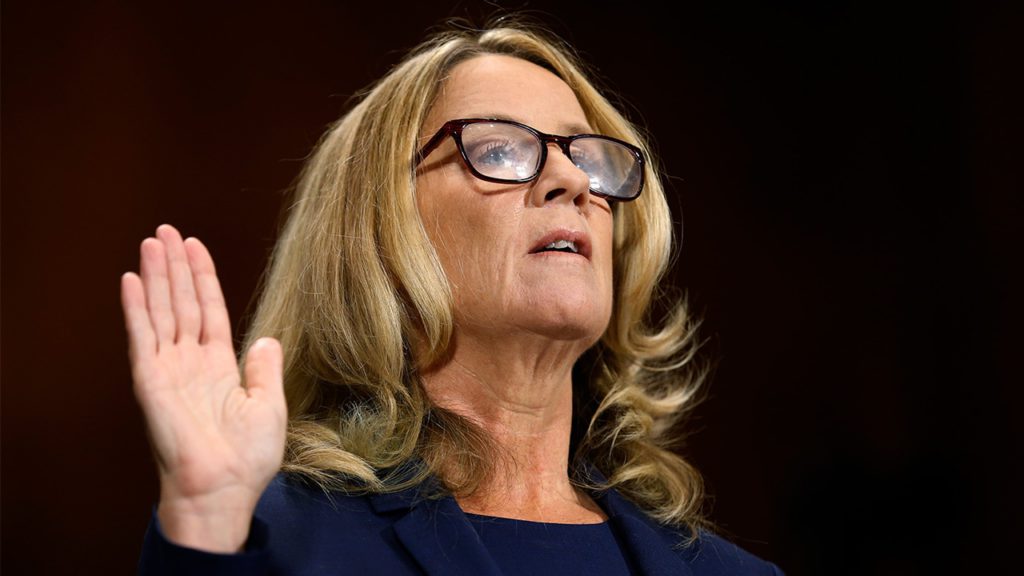 An Interview With Chris Garrett

The FBI has finished an interview with Chris Garrett, a high school friend of Kavanaugh. Ford said she “went out with” Garrett for a few months in high school. Garrett’s lawyer, William Sullivan, said Garrett has voluntarily cooperated with the FBI’s reopened background check, but he declined to comment further.
Garrett is at the least fifth person known to have been interviewed since last Friday, when the White House directed the FBI to look again into the allegations.
Others interviewed include Mark Judge, who Ford has said was in the bedroom where, she says, a drunken Kavanaugh sexually attacked her at a 1982 high school gathering. Also interviewed were two other people Ford said were present but in a different room: Patrick “P.J.” Smyth and Leland Keyser. Judge, Smyth and Keyser say they don’t recall the incident described by Ford.
Kavanaugh has denied the accusations by Ford, by Deborah Ramirez, who says he exposed himself to her during a college party, and by Julie Swetnick, who has alleged she was victimized at a party attended by Kavanaugh and his friends.

Besides Trump, Senate Republicans also began to aim credibility questions at Ford. In a letter Tuesday night, the chairman of the Senate Judiciary Committee pressed Ford to turn over more information to support her claim and accused her lawyers of “withholding material evidence.”


In a letter Tuesday night, the chairman of the Senate Judiciary Committee pressed Ford to turn over more information to support her claim and accused her lawyers of “withholding material evidence.”
Sen. Chuck Grassley repeated his request for notes from Ford’s therapy sessions, details of her communications with The Washington Post and any recordings of her taking a lie detector test.
The senator said he was requesting the recordings because the committee has obtained a letter that “raises specific concerns” about the reliability of Ford’s polygraph test. In the statement, a man who says he is Ford’s former boyfriend says he saw Ford, a psychology professor, coach a friend on how to be less nervous during a polygraph examination.
If true, the claim could contradict testimony Ford gave last week, when she told senators she had never given tips or advice to anyone taking a lie detector test.
A representative of Ford’s legal team had no immediate comment.
Related Topics:Brett KavanaughChristine Blasey FordPresident Donald TrumpRepublicansexual assaultSupreme Court nominee
Up Next