LOS ANGELES — Here’s another thing travelers can consider bringing when a trip takes them through Los Angeles International Airport — marijuana. Just be careful about carrying it onto the plane.

“TSA’s focus is on terrorism and security threats to the aircraft and its passengers.” — TSA spokeswoman Lorie Dankers

A written policy posted by airport police says small amounts of weed may now be brought into one of the world’s busiest airports. But, police warn, possession of any amount is still a federal crime and TSA agents may find your stash.

What happens if they do remains a little murky. TSA spokeswoman Lorie Dankers said Thursday that agents won’t take it away but will summon the police and let them deal with it.

“TSA’s focus is on terrorism and security threats to the aircraft and its passengers,” Dankers said in an email.

“Whether or not the passenger is allowed to travel with marijuana is up to law enforcement’s discretion,” she added. 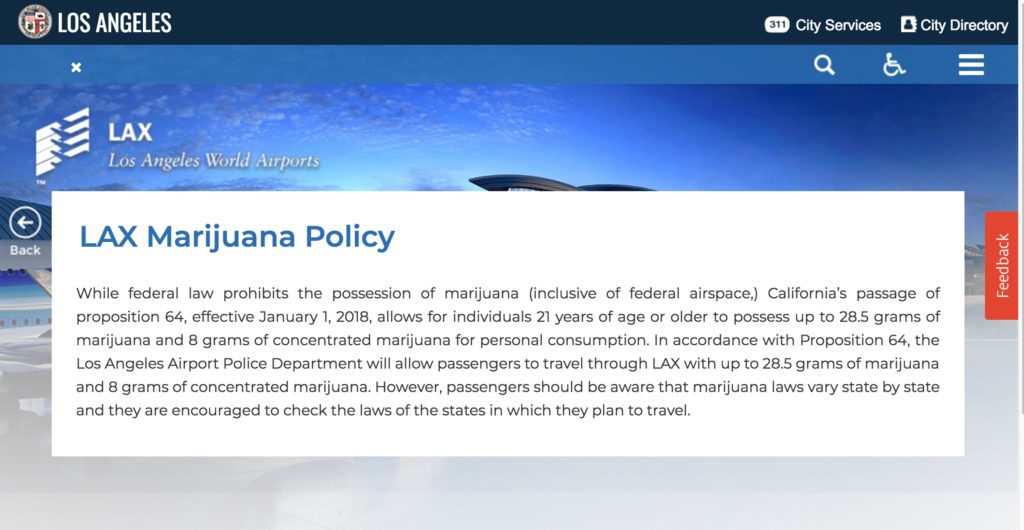 If it turns out a traveler is carrying no more than 28.5 grams (about an ounce), or 8 grams in concentrated form, airport police will simply turn them loose.

“Because there is no crime,” said airport Officer Alicia Hernandez. Still, police caution people to think twice before embarking on a cannabis-fueled vacation.

“Passengers should be aware that marijuana laws vary state by state and they are encouraged to check the laws of the states in which they plan to travel,” says the statement posted on the website flylax.com last January after California legalized recreational marijuana.

So far, few if any other airports seem to have followed suit. San Diego International Airport has no policy on pot, said spokesman Jonathan Heller.

In Colorado, one of the first states to legalize recreational marijuana in 2012, it is still illegal to bring it into Denver International Airport.

Possession Is Still a Federal Crime

“The first thing the TSA is going to do is if they find something that is illegal for federal purposes is they’re going to refer it to local law enforcement.” — Douglas Kidd, executive director of the National Association of Airline Passengers

In any case, few have been caught carrying pot, she said, and for those who have the penalty was light if the amount was small.

“If it’s a small amount the TSA and the Denver Police Department will ask that person to dispose of it and if that person is willing to do that they move through,” she said.

Still the best advice to travelers, says Douglas Kidd, executive director of the National Association of Airline Passengers, is to leave your stash at home. You can always buy more when you get there.

“The first thing the TSA is going to do is if they find something that is illegal for federal purposes is they’re going to refer it to local law enforcement,” Kidd said.

“Now local law enforcement may say, ‘We’re not going to do anything.’ But still, the delay could cause you to miss your flight.”