Roll Back Mileage Standards? Feds Hear Reasons Not to in Fresno. 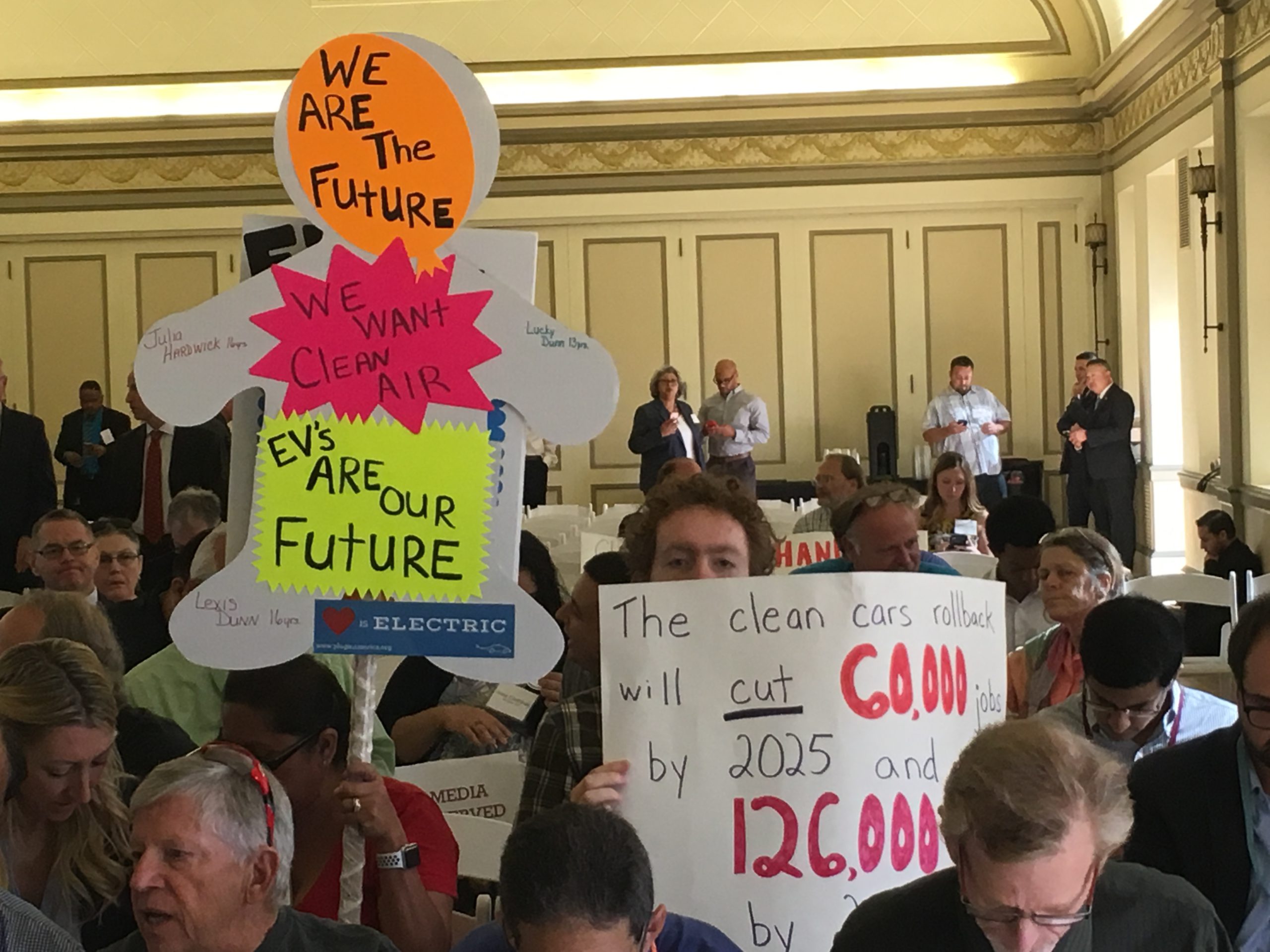 In the first of three straight days of hearings around the country, Californians let the federal Dept. of Transportation know how they felt about proposed regulations to change mileage standards.
For the most part, those who spoke in Fresno on Monday are against President Donald Trump’s proposal to, as opponents put it, roll back the standards.
The sessions heard comments on updating fuel economy and emission rules. The hearings move to Dearborn, Mich. today and Pittsburgh on Wednesday (Sept. 26).

“We are asking the EPA to represent those of us who have asthma and respiratory disease,” said Janet DietzKamei, 73, a member of the Central Valley Clean Air Coalition.
DietzKamei said she is unable to leave her Fresno home on some days because the air is so polluted.
Environmentalists protested outside, hoisting signs reading, “Clean cars = Clean air” and chanting, “Clean cars now.”

On the 10th floor of the 1401 Grand (at the corner of Fulton and Tuolumne streets), federal officials heard testimony. At the start of the meeting, Jonathan Morrison, chief counsel of NHTSA said they would likely hear 12 hours of testimony without breaks, but it wound up being seven hours. 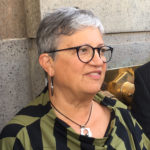 The California delegation spoke at the first panel, including state Attorney General Xavier Becerra, and Mary Nichols, chair of the California Air Resources Board. They were joined by state EPA secretary Matt Rodriguez, Bay Area air official Jack Broadbent, and Wayne Nastri, executive director of the South Coast Air Quality Management District.
“This is a flabby exercise in muscle flexing,” Nichols said. She added that rolling back the federal regulations would lead to more pollution.
Becerra continued on the same note.
“Our state is about progress, not about backsliding to the last century,” he said. “Do your job. Withdraw this proposal.”

Becerra sued the Trump administration over its attempt to change the standards, including a revocation of California’s waiver to make its standards more stringent than federal regulations. He said after the panel that there is a right way for the government to change standards, but this wasn’t it.
“There is a way to do it. No one, including the occupant in the White House, is above the law,” Becerra said. “We all have to follow the rules. … All we are saying to the administration, if you got an idea, follow the rules. If it is better than what we got on the table, let’s explore it. You can’t arbitrarily or capriciously break the law by changing the rules.”
The EPA, in a document promoting the event, wrote “the current standards have been a factor in the cost of new automobiles rising to an average of $35,000 or more — out of reach for many American families. Indeed, compared to the preferred alternative in the proposal, keeping in place the standards finalized in 2012 would add $2,340 to the cost of owning a new car, and impose more than $500 billion in societal costs on the U.S. economy over the next 50 years.”

Not all the speakers on Monday voiced opposition.
Steven Douglas spoke on behalf of the Alliance of Automobile Manufacturers. He told the panel that he appreciated the standards review and supported a single national program.
“We believe the changes are appropriate to the standards. The consumers are not buying the most fuel-efficient products in the quantity needed,” Douglas told GV Wire after he spoke.
He wants California and the federal government to iron things out.
“When you have six sets of regulations from three different agencies covering the same vehicle, then it increases the costs and effects the affordability. Obviously, we want people buying the new cars, which are safer, cleaner, more efficient than any in history, so that’s why we want to keep one national program, one set of regulations,” Douglas said.

But Ford CEO Jim Hackett said in a speech last week that his company is against any freeze of the standards and favors “keeping the standard, not a rollback.”
“We have plans to meet it,” Hackett said.
The proposal announced in August by President Donald Trump’s administration would freeze U.S. mileage standards at levels mandated by former President Barack Obama for 2020. The standards regulate how far vehicles must travel on a gallon of fuel.
Under the deal finalized under Obama, the standard would rise to 36 miles per gallon by 2025 — 10 miles per gallon higher than today’s requirement. The goal was to reduce car emissions and save people money at the pump.
Looming over the administration’s proposal is the possibility that California, which has become a key leader on climate change as Trump has moved to dismantle Obama-era environmental rules, could set its own separate fuel standard that could roil the auto industry. That’s a change the federal government wants to block.
(Associated Press contributed to this story.) 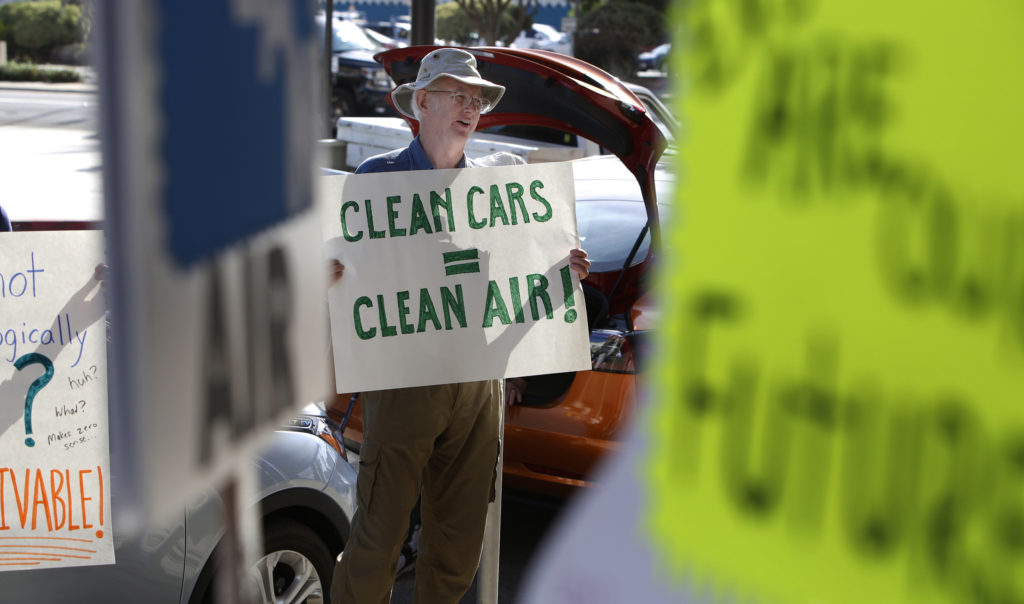 Paul Gipe protests before the first of three public hearings on the Trump administration’s proposal to roll back car-mileage standards in a region with some of the nation’s worst air pollution Monday, Sept. 24, 2018 in Fresno. The day-long session by the U.S. Environmental Protection Agency and National Highway Traffic Safety Administration is a means to gather public comment concerning the mileage plan, which would freeze U.S. mileage standards at levels mandated by the Obama administration for 2020, instead of letting them rise to 36 miles per gallon by 2025. (AP Photo/Gary Kazanjian)