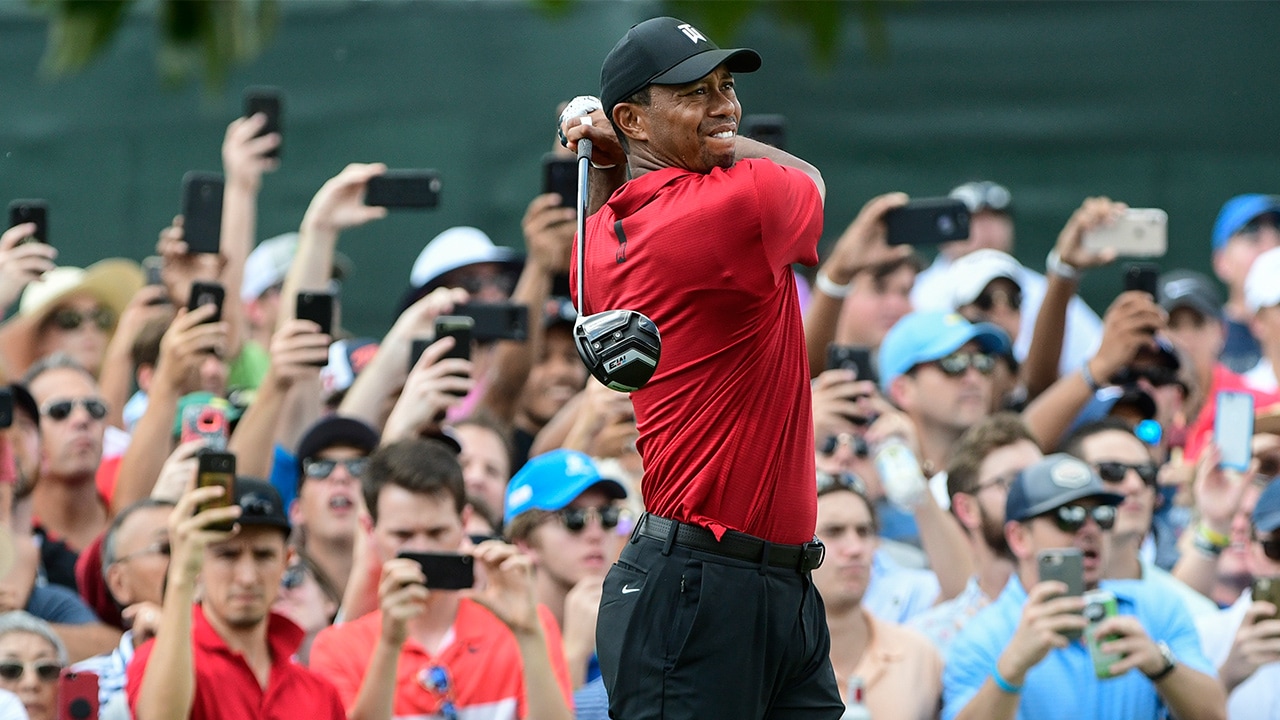 ATLANTA — Tiger Woods, in his Sunday red shirt, both arms raised in victory on the 18th green.


“I can’t believe I pulled this off.” — Tiger Woods
For so many years, the scene was familiar. This time, it was surreal.
“I can’t believe I pulled this off,” Woods said Sunday during the trophy presentation at the Tour Championship, where he gave thousands of delirious fans at East Lake, and millions more around the world, what they wanted to see, and what they thought they might never see again. And at that moment, Woods was overcome with emotion and paused.
After two back surgeries six weeks apart, he couldn’t lie down, sit or walk without pain. Golf was the least of his concerns, so much that he once said anything else he achieved would be “gravy.”
One year ago, while recovering from a fourth back surgery, he still had no idea if he could come back to the highest level of golf.

The Perfect Ending to His Amazing Return

“Just to be able to compete and play again this year, that’s a hell of a comeback,” he said.
Woods delivered the perfect ending to his amazing return from back surgeries with a performance out of the past. He left the competition feeling hopeless as he built a five-shot lead early and then hung on for a 1-over 71 and a two-shot victory over Billy Horschel.


“Just to be able to compete and play again this year, that’s a hell of a comeback.” — Tiger Woods
It was the 80th victory of his PGA Tour, two short of the career record held by Sam Snead that is now very much in play. And it was his first victory in more than five years, dating to the 2013 Bridgestone Invitational.
And that brought a new version of Tigermania. After he hit his second shot to the par-5 18th safely in a bunker in front of the green, the crowd came through the ropes and followed behind in a chaotic celebration. It was like that when he walked from the left side of the 18th fairway at the 1997 Masters he won by 12. It was reminiscent of that walk up the 18th fairway later that summer at the Western Open in Chicago.
This was pure pandemonium. Fans chased after any inch of grass they could find to watch the ending.
“I didn’t want to get run over,” Woods said with a laugh.
This felt just as big as a major, maybe better considering where Woods had been.

My congratulations to @TigerWoods on winning the @playofffinale! I am very happy for him and extremely proud of him. Tiger has worked very hard to get to this place, and has played very well all season. @PGATOUR

Overcoming the Embarrassment of a DUI Arrest

Several players, from Zach Johnson to Rickie Fowler to Horschel, waited to greet him. It was Johnson who unveiled red shirts at the Ryder Cup two years ago in the team room that said, “Make Tiger Great Again.”
“They knew what I was struggling with,” Woods said. “It was special to see them.”


“The 80 mark is a big number. It’s a pretty damned good feeling.” — Tiger Woods
Woods played only one PGA Tour event over two seasons because of his back. Off the golf course, he had to overcome the embarrassment of a DUI arrest in the early morning of Memorial Day in 2017 when he was found asleep at the wheel, later found to have a concoction of pain medication in his system.
He was becoming a legend on in video highlights. And then he brought it back to life this year, especially the last four days at East Lake. The players who have turns at No. 1 during his absence caught the full brunt of Woods in control. McIlroy faded early. Justin Rose faded late.
All that was left was the 42-year-old Woods in that red shirt, blazing brighter than ever, and a smile he couldn’t shake walking up the 18th to collect another trophy.
“The 80 mark is a big number,” he said. “It’s a pretty damned good feeling.”
He finished at 11-under 269 and won $1.62 million, along with a $3 million bonus for finishing second in the FedEx Cup. 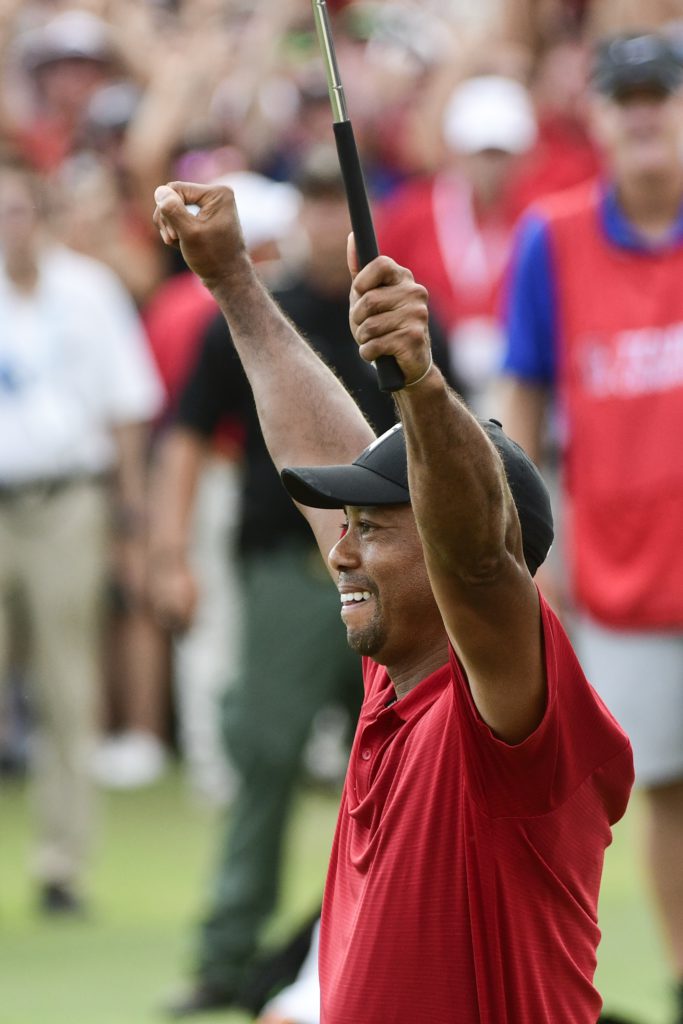 Tiger Woods celebrates after picking up his putt for par on the 18th green to win the final round of the Tour Championship golf tournament Sunday, Sept. 23, 2018, in Atlanta. (AP Photo/John Amis) 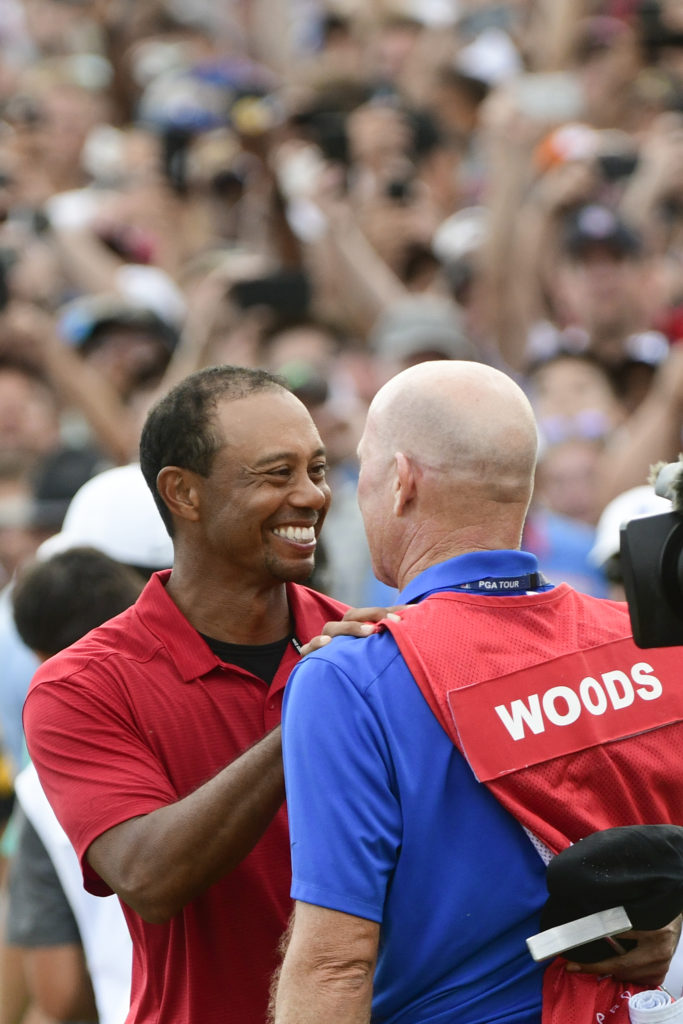 Only One Minor Disappointment

The only disappointment — a minor one under the circumstances — was realizing as he came down the 18th that Rose had made birdie to finish in a three-way tie for fourth, which gave him the FedEx Cup and the $10 million bonus.
Without that birdie, Woods would have won his third FedEx Cup title after starting at No. 20 going into the Tour Championship.
Bryson DeChambeau of Clovis rallied over the weekend rounds to finish 19th in the Tour Championship at 1-under-par. The Fed Ex Cup season leader going into the event, DeChambeau finishing third for 2018, winning a $2 million bonus. He has won $7.9 million in 2018, No. 2 in the world.
“Congrats, Rosie,” Woods told him. “World No. 1, hell of a season.”
Actually, former world No. 1 for Rose. His four bogeys over the last 10 holes cost him the No. 1 ranking back to Dustin Johnson, who shot 67 and finished third. But this wasn’t about the FedEx Cup or even the world ranking.
This is Tiger’s big day, and nothing was going to change it. Woods had never lost when leading by three shots or more going into the final round. That was when he was regularly winning multiple times every season, compiling trophies at a rate never before seen in golf.
Was anything different having gone more than five years without winning? Rose had said it was a bit more unknown, and “there’s a lot on it for him” as well as everyone else.

But It Was Still Woods’ Arena

But this was still Woods’ arena. The walk from the putting green snakes some 80 yards across the road and through a gallery, and everyone could hear him coming from the procession of cheering. And within the opening hour, the Tour Championship had that inevitable feeling.

US Considers Limit on Green Cards for Immigrants on Benefits