Rosenstein to Meet Trump Thursday as Job Hangs in Balance 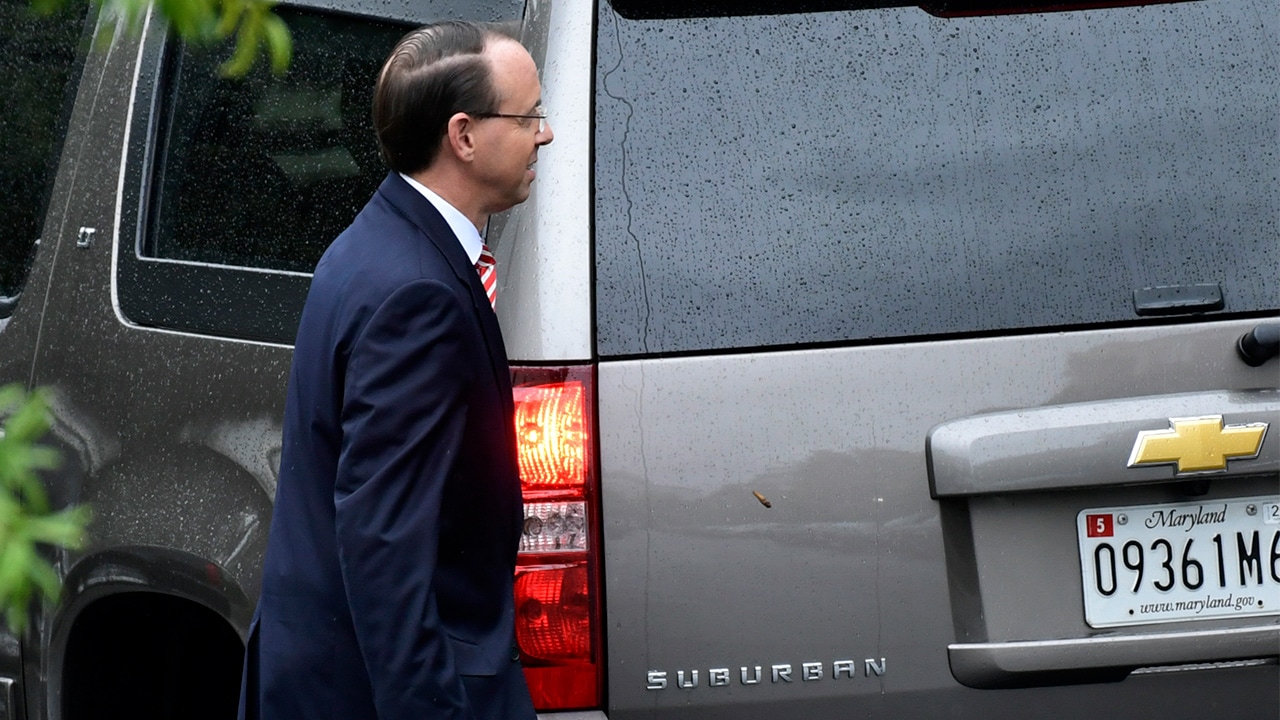 WASHINGTON — The White House delayed until at least Thursday a decision on the fate of Rod Rosenstein, the Justice Department official overseeing the Trump-Russia investigation, following chaotic hours of breathless and sometimes conflicting reports anticipating his imminent departure.
His future hanging in the balance over revelations that he had discussed possibly secretly recording the president, Rosenstein expected to be fired as he headed for the White House on Monday for what was later described as a prescheduled meeting.
Instead, the White House said that Rosenstein and Trump would meet Thursday after the president’s return to Washington, suggesting the deputy attorney general may be in his job for at least several more days. The meeting is set for the same day as an extraordinary Senate committee hearing that is to feature Supreme Court nominee Brett Kavanaugh and a woman who has accused him of sexually assaulting her when they were in high school.
Any termination or resignation would have immediate implications for special counsel Robert Mueller’s investigation of possible collaboration between Russia and the Trump campaign before the 2016 election. Rosenstein appointed Mueller and oversees his investigation.
Rosenstein and Trump, who is in New York for a U.N. meeting, had an extended conversation to discuss recent news stories about negative comments Rosenstein is reported to have made last year about the president, said White House spokeswoman Sarah Huckabee Sanders.

The deputy attorney general was reported as having discussed possibly secretly recording the president and invoking the Constitution to have the Cabinet remove him from office. The Justice Department issued two statements from Rosenstein denying the remarks and released a separate statement from someone who said he recalled the recording comment but insisted that it was meant sarcastically.

Reluctant to Directly Fire Aides Himself

Despite his “You’re Fired!” tagline from his “The Apprentice” reality show days, the president has shown himself reluctant to directly fire aides himself.
While his White House has been marked with unprecedented staff turnover, Trump has often left the task to deputies, including Kelly. He dispatched his former bodyguard to fire former FBI Director James Comey — though Comey was out of town. In other cases, Trump has publicly and privately shamed a staffer, pushing them to resign of their own volition.
The reports about Rosenstein add to the turmoil roiling the administration, just six weeks before midterm elections with control of Congress at stake. In addition to dealing with the Mueller investigation, the White House is also struggling to win confirmation of Kavanaugh, in the wake of sexual misconduct allegations.
The latest speculation surfaced Monday morning amid conflicting reports about Rosenstein’s plans. One person with knowledge of the situation said he expected to be fired, though other reports suggested that he would resign.
Trump, who on Friday suggested that he would remove a “lingering stench” from the Justice Department, did not publicly reveal any plans over the weekend.
As of Sunday, Trump said he had not decided what to do about Rosenstein. He angrily asked confidants, both inside and outside the White House, how to respond. He received mixed messages. Some urged him to fire Rosenstein. Others suggested restraint while seeing if the report was incorrect or if it was planted by some adversary.
Congressional Republicans, Democrats and some Trump aides have warned for months that the president shouldn’t fire Rosenstein, saying such a move could lead to impeachment proceedings if the Democrats retake the House in the upcoming midterms.

Lashing out With Angry Tirades

Though Trump has mostly spared Rosenstein from some of the harsher and more personal attacks he has directed at Attorney General Jeff Sessions, he has occasionally lashed out with angry tirades at the Justice Department’s No. 2 official, including after FBI raids in April targeting the president’s former personal lawyer, Michael Cohen.

Will Smith Bungee Jump Is Latest Stunt Near Grand Canyon