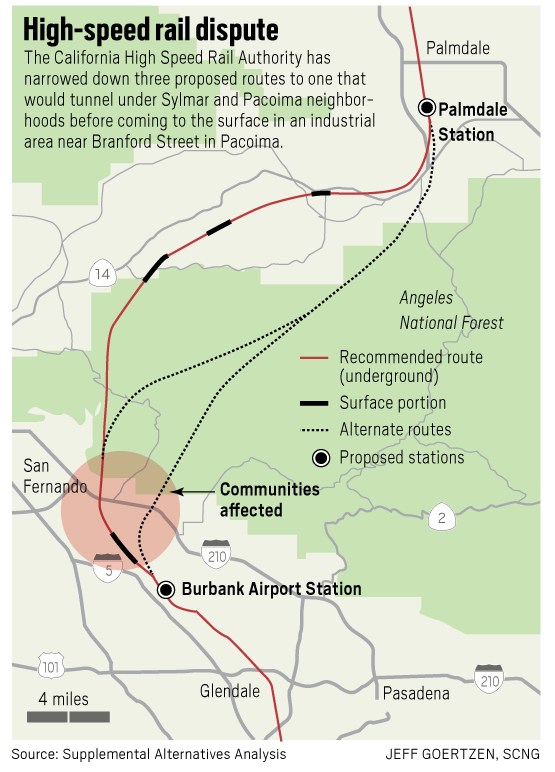 LOS ANGELES — A plan to build a high-speed train between Southern California and Las Vegas is back on track after a private rail company announced Wednesday it has taken over the project. Florida-based Brightline said it has acquired the rights to XpressWest’s 185-mile federally approved rail corridor along Interstate 15. The financial terms of the deal were not disclosed.Brightline said it will start construction of the $7 billion line next year. It expects to complete a link between Las Vegas and Victorville, California, by 2022, with plans to eventually extend the line another 80 miles (130 kilometers) to Los Angeles.The project stalled several times over the past decade, mostly over financing.

“Today those travelers are limited to traveling by air or car, and Brightline expects to offer a convenient alternative that will make the trip in less than two hours.” — Brightline

“Today those travelers are limited to traveling by air or car, and Brightline expects to offer a convenient alternative that will make the trip in less than two hours,” the firm said in a statement.

As part of the agreement, Brightline will acquire 38 acres of land adjacent to the Las Vegas strip where it will build a train station along with a mixed-use development, the company said.

It would be only the second privately funded express intercity passenger service in the U.S. Brightline currently runs a Florida rail system serving Miami, Fort Lauderdale and West Palm Beach.

The announcement came the same day that the California High Speed Rail Authority said it would recommend a study of a separate proposed bullet train route that would tunnel under San Fernando Valley neighborhoods in Los Angeles.

More than half of the 38-mile proposed line would be below ground — including through Sylmar, other parts of Pacoima, the Angeles National Forest and the San Gabriel Mountains, the Daily News reported.

The segment, between Palmdale and Burbank, is part of an 800-mile state high-speed rail project connecting San Francisco to Anaheim.