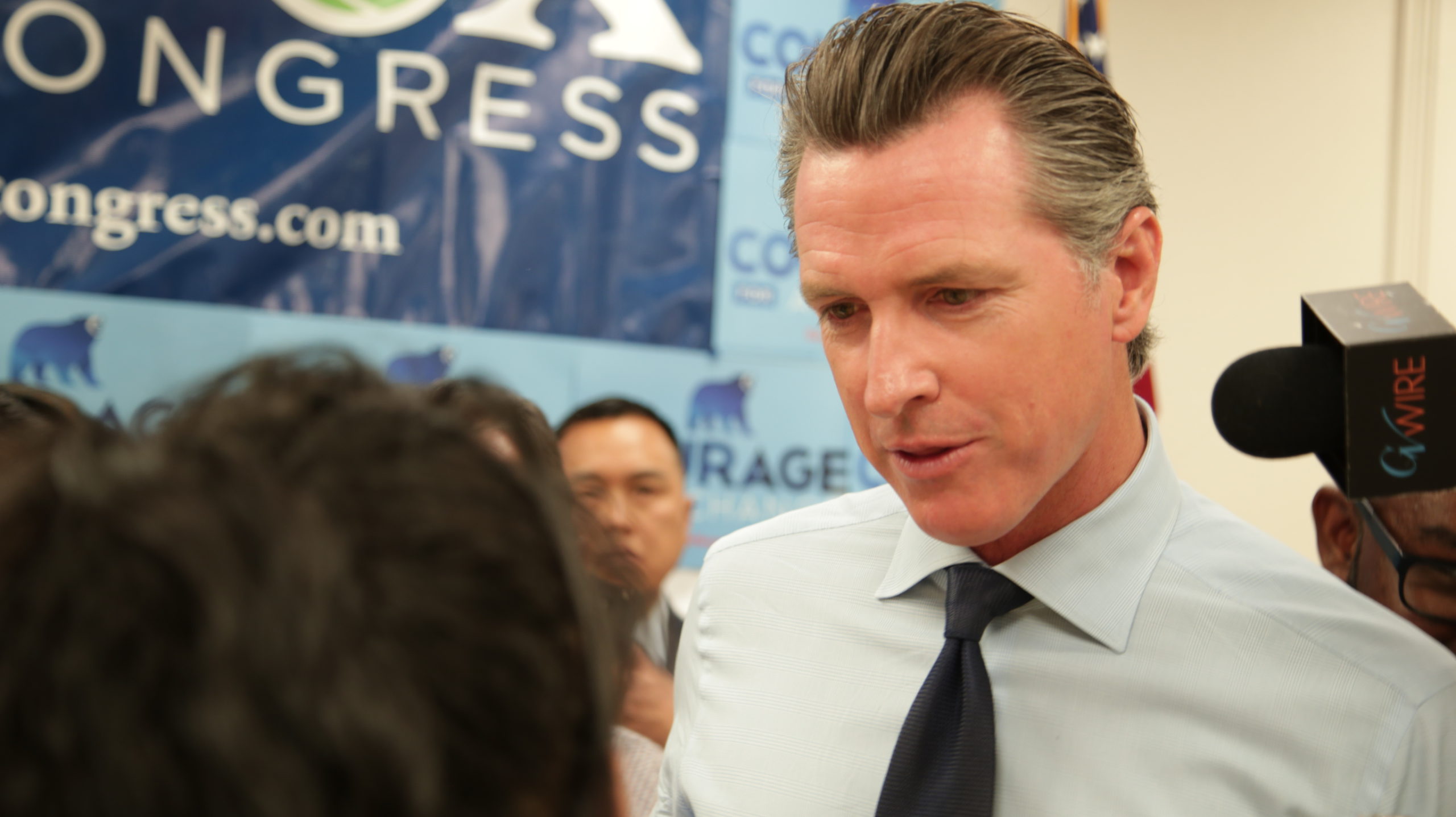 Gavin Newsom stumped in Fresno, touring for governor in his big blue bus. Speaking in front of a receptive audience of around 50, two Republican names permeated the conversation: Donald Trump and John Cox.
Newsom mixed in a knock at the president while talking about his support for health care.
“Universal health care as a right in California is absolutely achievable,” Newsom said to a responsive audience. “I’m going to lead, take responsibility. I love (how) Republicans always say you need to take responsibility and the guy in the White House … acts like a victim every damn day. I’ve never seen a guy more incapable of taking responsibility.”
Cox, a Republican, is Newsom’s opponent in the Nov. 6 election.
The lieutenant governor arrived in downtown Fresno Wednesday (Sept. 12) morning, with wife Jennifer, both carrying pink boxes picked up at Donut Hole, a few stores down from Fresno County’s Democratic Party headquarters.
Two other Democratic hopefuls for office appeared with Newsom: TJ Cox, a congressional candidate in the 21st district, and Melissa Hurtado, a Sanger councilwoman running for state Senate in the 14th district.

In a post-speech session with the media, Newsom talked about problems at the DMV, a big campaign issue for John Cox.
“I think an audit’s fine, but I think reform is necessary. I don’t think we need an audit to tell us what’s wrong with the DMV. We’ve known what’s wrong with the DMV for decades,” Newsom said.
Cox visited the Fresno DMV last month, highlighting wait lines and the need for an audit.

Cox recently launched a campaign website, calling Newsom a “fortunate son,” detailing his personal and political financial dealings with the Getty family of oil money fame.
A recent Los Angeles Times story reported about Newsom’s political and financial support from eight wealthy families in San Francisco. The candidate told a different story.
“(It’s a) golden oldie. … It’s been written before,” Newsom said.
“(I’m) the product of a teenage mom who was separated, came from no wealth, passed away 18 years ago from breast cancer, raised me on her own,” Newsom said. “I saw my dad on weekends every three or four months and during the summer. You’d see a completely different story, but that one isn’t as interesting. So I get why it hasn’t been written.”

Regarding Prop 3, a $9 billion water bond on the November ballot, Newsom said he’s concerned about aspects of it. But, he said he hasn’t made a decision to support it or not.
When asked about other water issues, Newsom referenced a prior water bond, which raised money for water projects. Supporters of Temperance Flat had hoped to receive much more money from the California Water Commission than was granted.
“I’m not ideologically opposed to above-ground storage. Heck, I was mayor of a city, San Francisco that has one of the largest above-ground storage facilities,” Newsom said.

Will There Be a Debate?

The two campaigns have also had a hard time nailing down a debate date. A CNN-hosted proposal recently faltered. Both sides publicly said they are willing to debate at a forum conducted by San Francisco public-broadcaster KQED.
As to when a debate with Cox may happen, Newsom said he looks forward to hearing Cox’s response to the KQED offer.

A recent poll from Probolsky Research sees Newsom with only a five-point lead, 44%-39%. That closes the gap from a July poll by the Public Policy Institute of California that saw Newsom hold a 55%-31% advantage.
GV Wire polling analyst Drew Phelps says that the Probolsky polling model skewed slightly conservative, likely boosting Cox.

Some McDonald's Workers Vote to Strike Over Sex Harassment