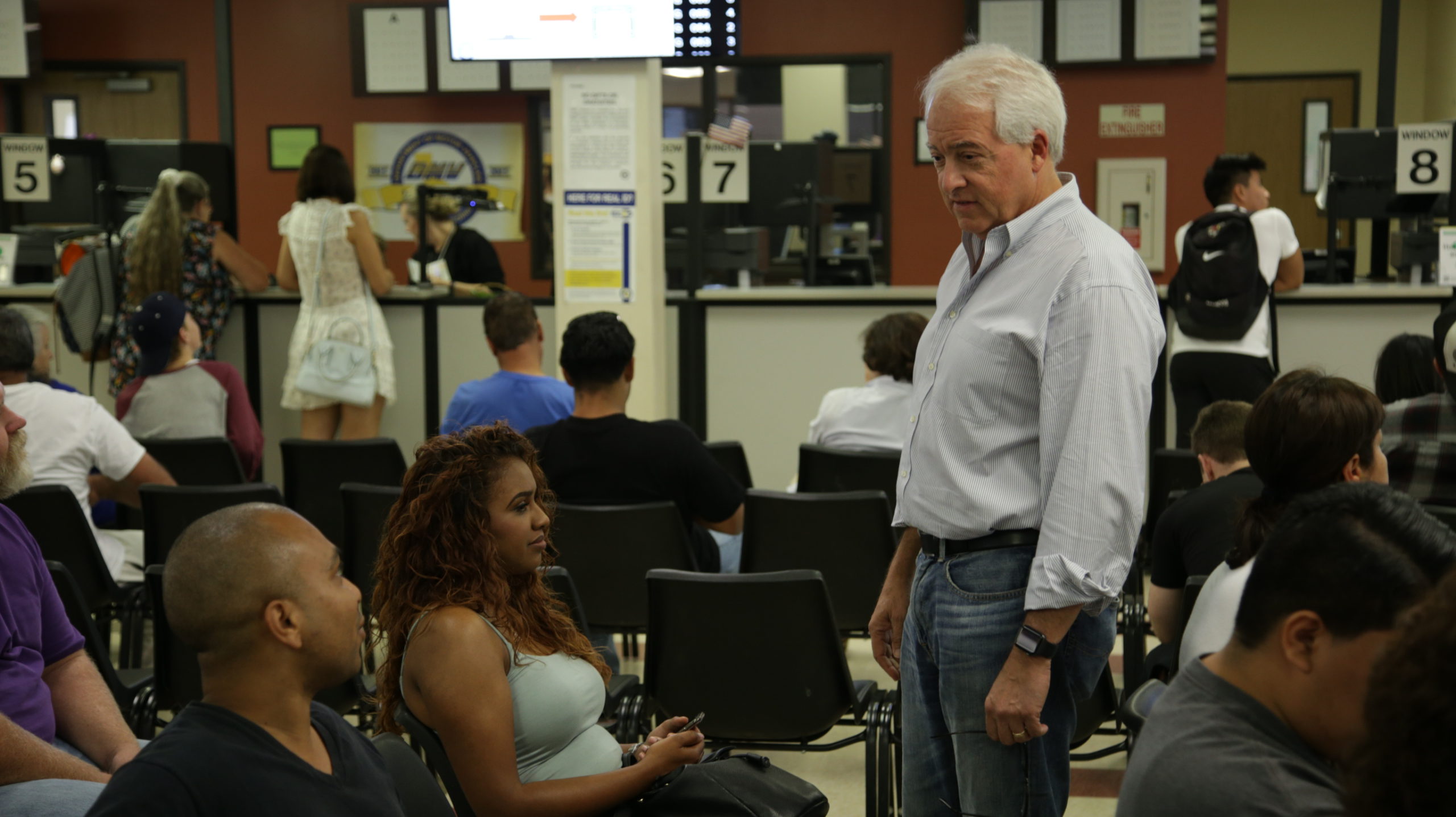 The modest wait times of DMV customers seemed to catch John Cox off-guard.
The Republican candidate for governor visited Fresno on Friday afternoon, talking to motorists at the office on north Blackstone Avenue. This was not the first time Cox had visited a DMV office to observe the wait lines in person. He’s traveled up and down California doing so.
Cox expected to see people in long wait times. Most of the people he spoke with said they were waiting 30 minutes to an hour. Cox noted it must have been a light day in Fresno. He that said at other stops, he’s seen much worse.

“Our politicians are not devoting the resources. On top of that, (the DMV) are not submitting to audits of what they are doing with our resources.”—John Cox, candidate for governor
“It’s hit or miss. I talked to somebody in there who was in the Madera office, who was waiting eight hours,” Cox said.
One frustrated motorist in the Fresno office said he had been waiting more than four hours to take care of a motorcycle license issue.

The Rancho Santa Fe businessman made the campaign stop to highlight the dysfunction in the California government. He spent 20 minutes working the room, handing out water bottles in the process.
“It’s a shining example of what’s been happening in Sacramento,” Cox said. “Our politicians are not devoting the resources. On top of that, (the DMV) are not submitting to audits of what they are doing with our resources.”
Earlier this month, the state legislature declined to conduct an audit of the DMV. The Legislature did vote to add $16 million in emergency funds to hire more workers. That was on top of $40 million in the last budget. DMV requested another $26 million more.
The gap, according to DMV officials, is to comply with the federal Real ID standards. Travelers need the new identification card to take a domestic flight starting in Oct. 2020.
Cox made sure to criticize state spending on the high-speed rail at the same time the DMV operates with decades-old computer systems.
“When it comes time to delivering a basic service like the DMV, our political class in Sacramento are not serving its people well,” Cox continued.
Cox also hit on his campaign themes of criticizing Democratic opponent Gavin Newsom, the gas tax hike, and lack of government accountability of government.

While people waiting enjoyed talking to a man running for the top office in the state, they were not sure it would lead to voting for him in November.
Dwayne Rogers of Fresno said meeting Cox could influence his vote. But there are more important issues in his estimation.
“It’s an inconvenience,” Rogers said of the DMV. “There are higher priorities like water and prison reform.”
Jason Knee of Fresno, who like Rogers waited at least a half-hour for service, didn’t commit to Cox either.
“Personalities are great, but it’s what you are doing,” said the undecided Knee. He plans to do his research online.

Gift From the Heart Helps Fresno State Students with MS