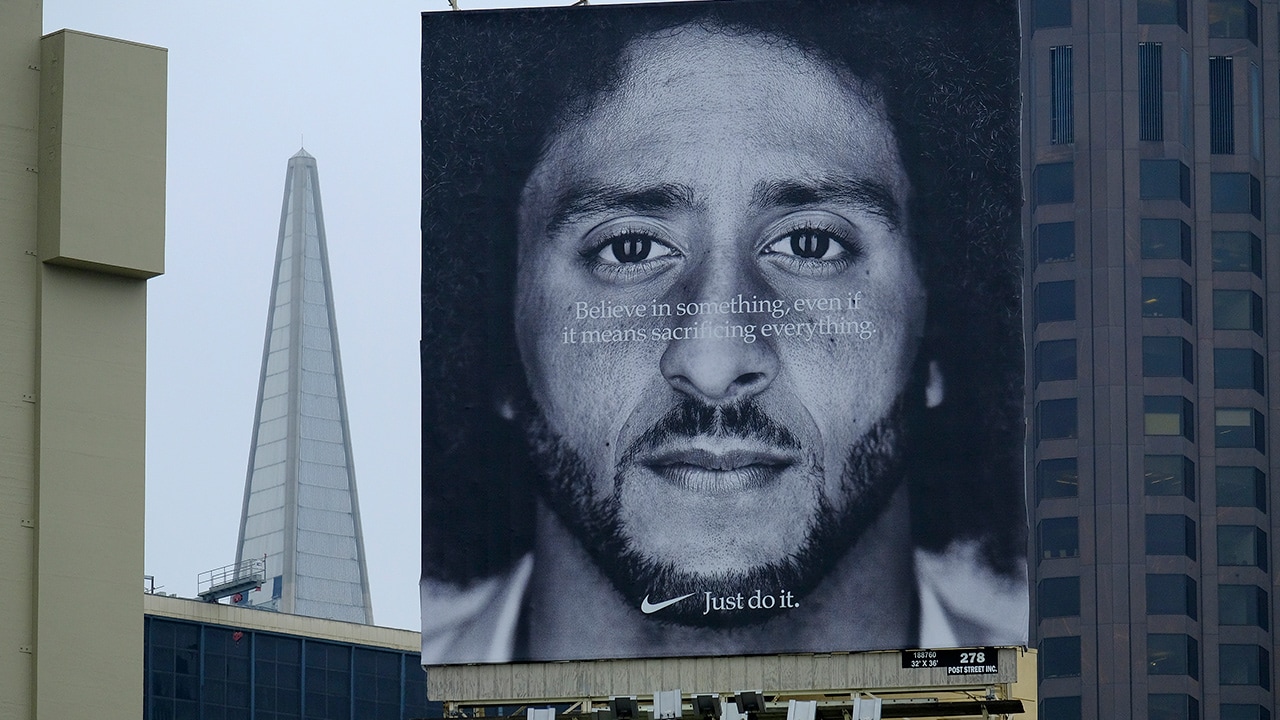 Nike has unveiled its first “Just Do It” ad narrated by Colin Kaepernick, a spot scheduled to air during the NFL season opener Thursday night as well as during the U.S. Open tennis tournament and other major sporting events.

Expected to Air During College Football and MLB Games

The spot is expected to air this week during college football and MLB games, and stream on various music, gaming and other platforms, Nike spokeswoman Sandra Carreon-John said.
Kaepernick hasn’t spoken to the media publicly since opting out of his contract with San Francisco and becoming a free agent in 2017. He scored a legal victory last week in his grievance against the NFL and its 32 teams when an arbitrator allowed his case to continue to trial. The quarterback claims NFL team owners conspired to keep him out of the league because of his protests. His case hinges on whether owners worked together rather than decided individually to not sign Kaepernick.
A similar grievance is still pending by former San Francisco teammate Eric Reid, a Pro Bowl safety who joined in the protests.
Kaepernick already had a deal with Nike that was set to expire, but it was renegotiated into a multiyear agreement to make him one of the faces of Nike’s 30th anniversary “Just Do It” campaign, according to a person familiar with the situation who spoke on condition of anonymity because details of the detail had not been revealed publicly.
The campaign includes video ads and billboards, like one displayed atop a Nike store in downtown San Francisco on Wednesday.

Nike also will create an apparel line for Kaepernick, including a signature shoe, and contribute to his Know Your Rights charity, the person said. The deal puts Kaepernick in the top bracket of NFL players with Nike.

President Trump and Other Criticism

President Donald Trump, a frequent critic of protesting NFL players, tweeted Wednesday that Nike is getting “killed” over the endorsement deal:

Just like the NFL, whose ratings have gone WAY DOWN, Nike is getting absolutely killed with anger and boycotts. I wonder if they had any idea that it would be this way? As far as the NFL is concerned, I just find it hard to watch, and always will, until they stand for the FLAG!

The College of the Ozarks, a private Christian school in Point Lookout, Missouri, that competes in sports at the NAIA level, said it will remove all uniforms purchased from Nike that contain the brand’s logo.
Last year, the college added a stipulation to competition contracts, saying it would walk away from any game where the opposing team takes a knee, sits or turns its back on the flag or anthem.
“If Nike is ashamed of America, we are ashamed of them,” College of the Ozarks President Jerry C. Davis said in a statement. “We also believe that those who know what sacrifice is all about are more likely to be wearing a military uniform than an athletic uniform,”