The comments by Pierre Kraehenbuehl came amid signs that the U.S., with Israeli support, is aiming to abolish UNRWA in an apparent attempt to remove one of the most contentious issues in the Israeli-Palestinian conflict from the negotiating agenda.

“One cannot simply wish 5 million people away,” Kraehenbuehl, commissioner of the U.N. Relief and Works Agency, said in an interview with The Associated Press.

In January, the U.S., the largest donor to the agency, slashed some $300 million from its annual contribution to UNRWA, prompting what Kraehenbuehl called an unprecedented financial crisis.

Although he has made up some of the deficit by raising money from other countries, the agency still lacks over $200 million. It recently laid off over 100 people in the Gaza Strip and cut back the hours of 500 other employees. The upcoming school year for hundreds of thousands of Palestinian children across the Middle East has been threatened.

Kraehenbuehl made his comments before the Trump administration announced Friday that it was cutting more than $200 million in bilateral aid to the Palestinians, following a review of the funding for projects in the West Bank and Gaza.

The department notified Congress of the decision in a brief, three-paragraph notice sent first to lawmakers and then to reporters. It said the administration will redirect the money to “high priority projects elsewhere.”

Click on the video above to watch GV Wire News Director Bill McEwen’s interview on Israeli-Palestinian relations with retired FBI special agent Tom Knowles, who was a legal attache in the region.

Caught off Guard by the Decision

Kraehenbuehl said he was caught off guard by the American decision, which came just weeks after he had held what he described as a successful meeting with Jared Kushner, President Donald Trump’s son-in-law and chief Mideast adviser. 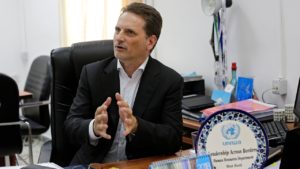 “I can say with a great degree of confidence that the decision was not related to UNRWA’s performance.” — Pierre Kraehenbuehl, commissioner of the U.N. Relief and Works Agency

He said he still has not gotten a straight answer from the Americans about why they made their decision.

But he said he believes it is connected to the uproar over the U.S. recognition of Jerusalem as Israel’s capital in December. The Palestinians, who seek east Jerusalem as their capital, condemned the decision and severed nearly all ties with the Americans.

“I can say with a great degree of confidence that the decision was not related to UNRWA’s performance because in November I had received very constructive and openly positive feedback on those issues,” he said.

“A few weeks later, tensions increased around the question of Jerusalem,” he added. “It appears that the humanitarian funding to UNRWA got caught up in the deep polarization around that question.”

The State Department said it is reviewing funding to UNRWA and has not decided whether to restore support in the future. It repeated its position that the agency’s repeated financial crises are “unsustainable” and called on it to find other countries to share the funding burden and to undertake “fundamental reforms.”

But privately, there are signs that the American agenda runs deeper and that the Trump administration seeks to abolish UNRWA altogether.

In an internal email recently published by Foreign Policy magazine, Kushner called for a “sincere effort to disrupt UNRWA.”

“This (agency) perpetuates a status quo, is corrupt, inefficient and doesn’t help peace,” he reportedly wrote.

The Palestinians fear the U.S. is putting pressure on host countries to absorb their refugee populations and eliminate the issue from future peace negotiations. The White House says it is working on a regional peace plan, though it has not said when it will be released.

UNRWA was established in the wake of the 1948 Mideast war surrounding Israel’s creation. An estimated 700,000 Palestinians fled or were forced from their homes in the fighting.

In the absence of a solution, the U.N. General Assembly has repeatedly renewed UNRWA’s mandate. The agency now provides education, health care and social services to more than 5 million refugees and their descendants. It serves populations in Gaza and the West Bank, as well as Jordan, Lebanon and Syria.

Seen by the Palestinians and most of the international community as providing a valuable safety net, UNRWA is viewed far differently by Israel.

Prime Minister Benjamin Netanyahu accuses the agency of perpetuating the conflict by helping promote an unrealistic Palestinian demand that refugees have the “right of return” to long-lost homes in what is now Israel. He has said UNRWA should be abolished and its responsibilities taken over by the main U.N. refugee agency.

Some in Israel have even tougher criticism, accusing UNRWA of teaching hatred of Israel in its classrooms and tolerating or assisting Hamas militants in Gaza.

Kraehenbuehl said Israel has raised similar concerns for years, but that there has been a “strong intensification” of the criticism now that the Trump administration appears to be in agreement.

“I really find it very difficult to imagine that I have to go back to them and tell them that I have failed and we have failed to mobilize the needed resources, to keep the one thing that gives them a certain prospect in life … which is their education.” — Pierre Kraehenbuehl, commissioner of the U.N. Relief and Works Agency

He rejected the Israeli claim that his agency is perpetuating the conflict, saying that it is carrying out a U.N.-mandated mission that reflects the will of the international community.

Kraehenbuehl said that Israeli claims that the Palestinians are the only people to pass down refugee status to their children also are unfounded, saying that Afghan refugees displaced decades ago have the same status.

He also noted that UNRWA has a committee to monitor the content of its classrooms and has condemned attempts by Gaza militants to use UNRWA facilities for cover.

Kraehenbuehl said the best way to solve these matters is to find a “political solution” to the Israeli-Palestinian conflict that addresses the fate of the refugees.

In the meantime, he said UNRWA’s focus is for its schools to open on schedule in early September. For now, he said there are enough funds to keep the schools running only until the end of the month. An aggressive fund-raising effort is underway to ensure the schools operate for the entire academic year.

“I see the courage displayed by our students in the face of so much adversity,” he said. “I really find it very difficult to imagine that I have to go back to them and tell them that I have failed and we have failed to mobilize the needed resources, to keep the one thing that gives them a certain prospect in life … which is their education. So we will knock on every door, we will leave no stone unturned until we have good news on this front.”