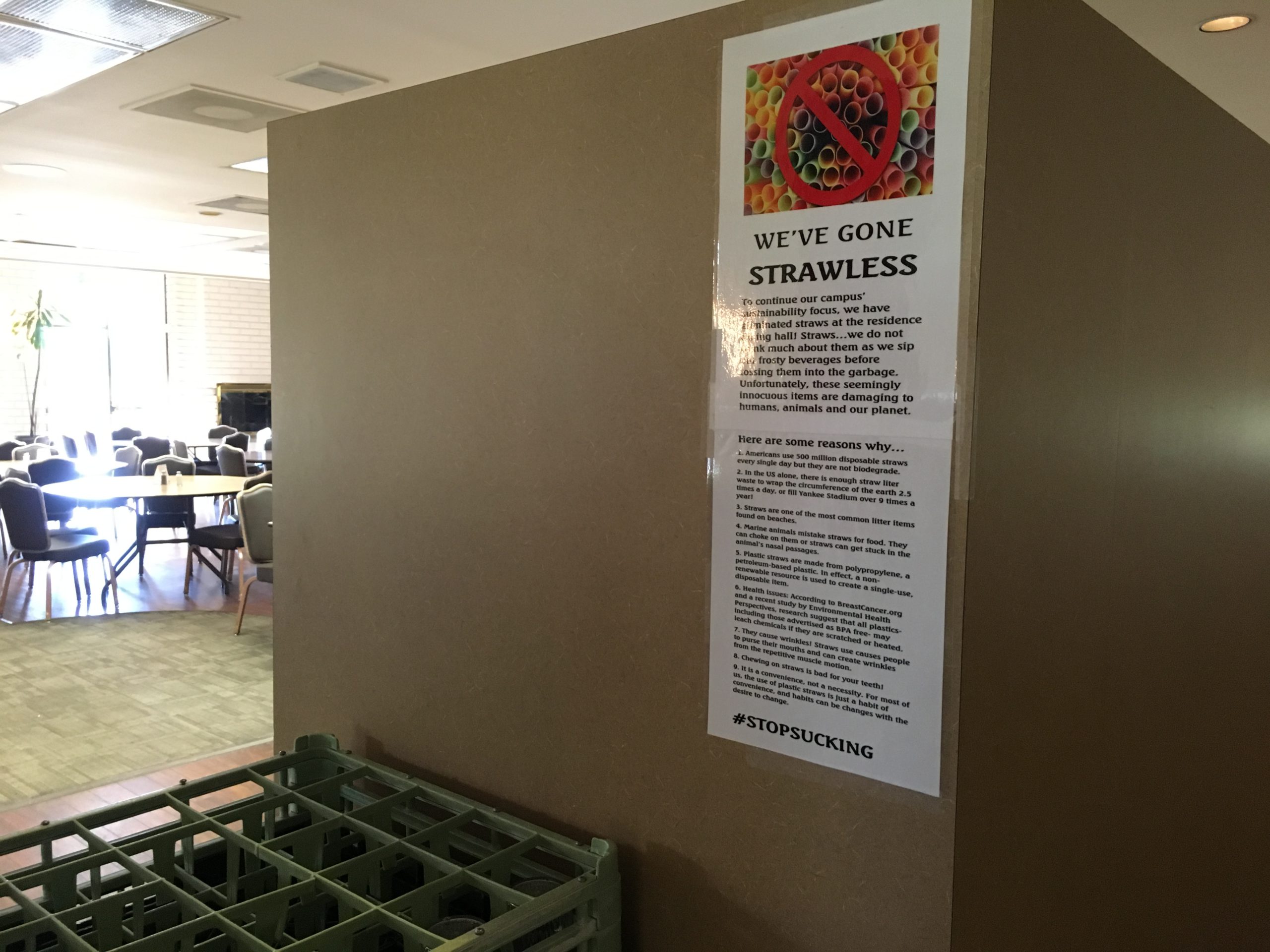 The #StopSucking movement has reached Fresno State.
While students are returning to campus, straws have not. University Dining Services stopped serving the drinking device when the fall semester resumed this week.

No Straws at Dining Halls

“I’m trying to be cutting edge, trying to be more sustainable.”—Deborah Guill, dining hall manager
Deborah Guill, dining services manager, says it is about the environment.
“It’s a very big movement right now of sustainability,” Guill said.  Straws also complicated the dining hall’s attempt at recycling.
“Having the straws mix in with the organic wet waste is kind of a problem,” she said.
Guill presented her idea to the dining hall management team, influenced by straw bans elsewhere.
“Straws are being banned in other cities and counties, in the Bay Area. And I said (to the management team), what do you think about attempting to go strawless?” Guill said.

Pacific Standard writer David Perry has debunked many of the anti-straw stats — including some of those cited in the dining hall poster.
The team decided to limit the straw ban to the dining hall as a pilot program. The straw ban only applies to the school cafeteria, and not to other campus restaurants.
She admits that she never received complaints beforehand about straws from the university community.

Fresno State’s dining hall joined Starbucks, Disney and other major corporations banning straws. Other cities, such as San Francisco and Santa Barbara restrict the use of straws as well.
On Monday (Aug. 20), the state Senate voted 25-12 on AB 1884 to limit restaurant’s use of straws. The law would require customers to specifically request a straw, instead of being automatically served one at a sit-down restaurant.
Guill noted that there are no straw regulations in Fresno, but she wants to be the trendsetter.
“I’m trying to be cutting edge, trying to be more sustainable. This is not something that is irreversible at this point. It is not being forced upon us. It is something that we should explore,” Guill said.

State Sen. Andy Vidak included a popular meme of a person carrying straws as they would a concealed firearm in his criticism of the trend.

The California Senate voted 25-12 this afternoon to ban restaurant servers from providing plastic straws to customers unless a customer specifically asks for one. I hope we won’t need permits one day in order to carry our own straws! pic.twitter.com/Z7iiYefaN8

Other critics note that eliminating straws may affect disabled drinkers. Guill said the dining hall will keep a stack of straws available for customers who request them.
A sign posted next to the soda machine at the dining hall lists nine reasons why Fresno State removed straws. Among the reasons — straws are the most common beach litter item, the environmental harm of plastic, and the damage straws can cause skin and teeth.
One figure cited, that Americans use 500 million straws a year, is dubious at best.
“Eco-Cycle itself got the 500 million straws a day figure from 9-year-old Milo Cress, who surveyed three straw manufacturers to get their estimations of the size of the straw market. Market analysts put daily straw usage in the United States closer to 175 million,” Christian Brtischgi wrote on Reason.
Pacific Standard writer David Perry has debunked many of the anti-straw stats — including some of those cited in the dining hall poster.

Freshman Rocio Ramirez of Guadalupe, enjoying a meal with friends at the dining hall, said Monday that he supported the ban.
“I don’t mind, I think it’s cool. I think about the turtles, right? Because of the turtles. Save the turtles,” she said.
Fellow freshman Prabir Parajuli of Nepal agreed.
“I think it’s better if you don’t use straws. It is plastic and it’s really hard to reuse it, recycle it,” Parajuli said. He added that it is not that much of an inconvenience to drink without it.
This is not the first adjustment students have had to make in the dining hall.
“I don’t think it’s going to be a problem. Over a decade ago, we went trayless,” Guill said. “That was big news. … It was for sustainability, cutting down on food waste, cutting down on washing wear and chemicals and stuff. It was an adjustment period, but for the most part, it was very positive. I’m hoping straws end up being the same situation.”

With Push From PETA, Animal Crackers Bust out of Their Cages

How Fresno State Helped Students Save $1 Million on Books