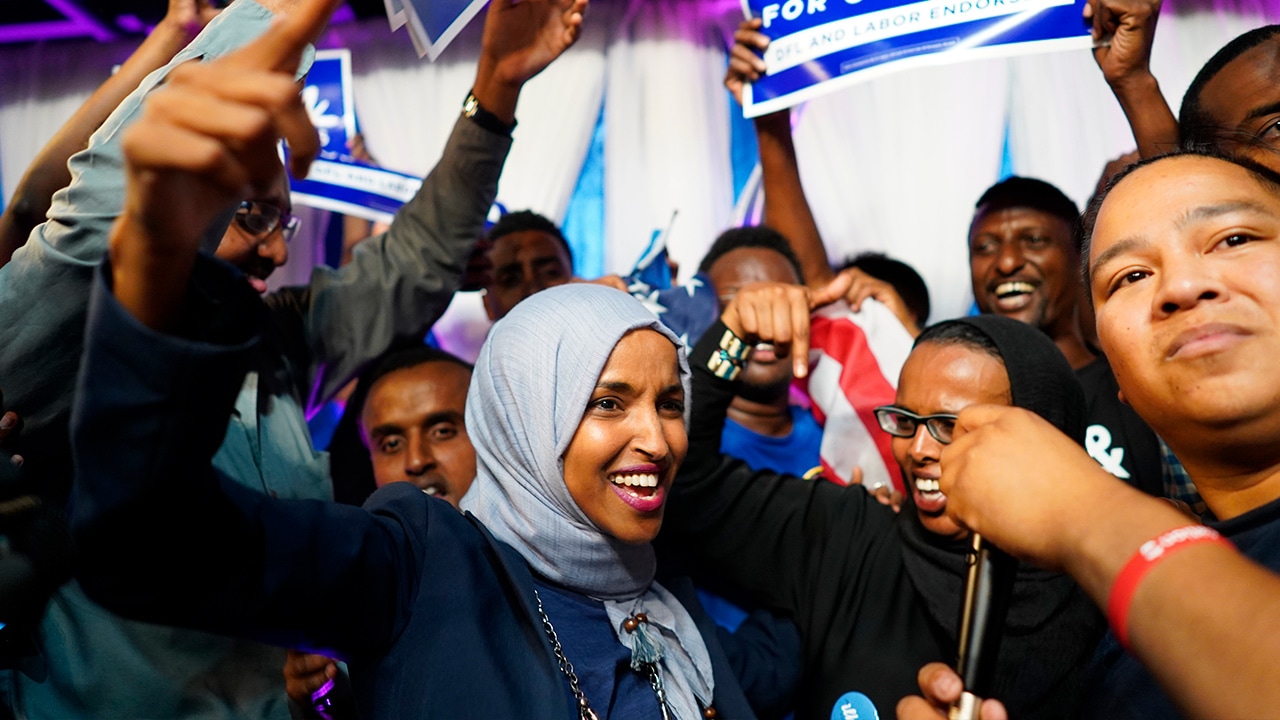 MINNEAPOLIS — President Donald Trump, meet Ilhan Omar.
Just two years ago, the Minnesota Democrat became the first Somali-American elected to a state legislature. Now she’s likely to become one of the first two Muslim women elected to Congress. And she says one of her top priorities will be resisting the Trump administration, which would forbid her from entering the U.S. if she were attempting to immigrate today.
“I myself would have been part of the travel ban,” Omar said on the campaign trail.
Her victory in Tuesday’s Democratic primary for a House seat from the immigrant-rich Minneapolis area depended heavily on support from people who feel persecuted in Trump’s America and voters who empathize with them.
No Republican has won the heavily liberal district since 1962, making the primary the de facto election, though Omar will face Republican candidate Jennifer Zielinski in November.

Winning the seat will position her as a new national voice against administration policies. The seat opened up when Rep. Keith Ellison, the first Muslim elected to Congress, launched a last-minute bid for attorney general after serving six terms.


“There is a clear and dangerous crossroads to where our country finds itself. You can see the politics of fear and scarcity that’s led us to the current administration we have.” — Ilhan Omar, candidate for the U.S. House of Representatives
Omar’s victory over a crowded field marked the latest milestone in the meteoric political rise of a woman who spent her childhood in a Kenyan refugee camp and immigrated to the United States at age 12. She won her seat in the state House in 2016.
On Tuesday, she defeated two more experienced candidates — former House Speaker Margaret Anderson Kelliher and state Sen. Patricia Torres Ray — as well as another Somali-American.
During the campaign, Omar often addressed the country’s divisions.
Omar was not giving interviews Wednesday, her campaign said.

Supporters cheered on the hijab-wearing candidate when she took the stage Tuesday night to claim victory. She recalled how she was just 8 when her family fled the civil war in Somalia and described what her win would have meant to that 8-year-old girl in the refugee camp.


“I think it sends a strong message for inclusion. Our win didn’t come just from the Somalis. We built a coalition, and that sends a message that people are sick and tired of the politics of fear. … People want to include us in the political process, and they welcomed us into their homes.” — Mohamud Noor, Democratic candidate seeking election to the Minnesota House of Representatives
“Today I still think about her, and I think about the kind of hope and optimism all of those 8-year-olds around the country and world get from seeing your beautiful faces elect and believe in someone like me,” an emotional Omar told the jubilant crowd.
The other Muslim woman who is likely to join Congress in January is former Michigan state Rep. Rashida Tlaib , a Palestinian-American who won a Detroit-area Democratic primary last week and is running unopposed in November.
Tlaib came to Minneapolis to campaign for Omar at a Middle Eastern restaurant last weekend at an event that was disrupted by conservative provocateur Laura Loomer.
Energized by the anti-Muslim rhetoric of Trump and his supporters, as many as 90 Muslims have run for national or statewide offices in this election cycle, including at least 15 in Minnesota.
They include Mohamud Noor, who won Tuesday’s primary in Omar’s state House district and will likely become the first Somali-American man elected to the Legislature; Hodan Hassan, a woman who won in a neighboring legislative district; and Fardousa Jama, a woman who advanced to the general election in a Mankato City Council race.

The victories reverberated beyond Minnesota, Noor said.
“It’s not just a celebration here. It’s a global celebration. I’ve been getting calls from all over the world,” he said, citing Somalia and countries of the Somali diaspora as far away as Australia.
Because Omar was in the Democratic minority in the Minnesota House, she has few legislative accomplishments. But she brought undeniable star power to the race, riding the fame from her history-making election to a spot on the cover of Time magazine. She also had a cameo in a recent Maroon 5 music video for “Girls Like You,” a song that played through the loudspeakers as Omar entered her victory party.
Among those celebrating was Khalid Mohamed. The Star Tribune reported he wore an American flag draped around his shoulders while holding a Somali flag in hand.
“This is back home,” the 25-year-old told the newspaper as he gestured to the small light blue flag with a white star. “And this is home now,” he added, wrapping the U.S. flag tighter around his chest.

Looking For Skills in High-Demand Careers? Check Out CTEC.