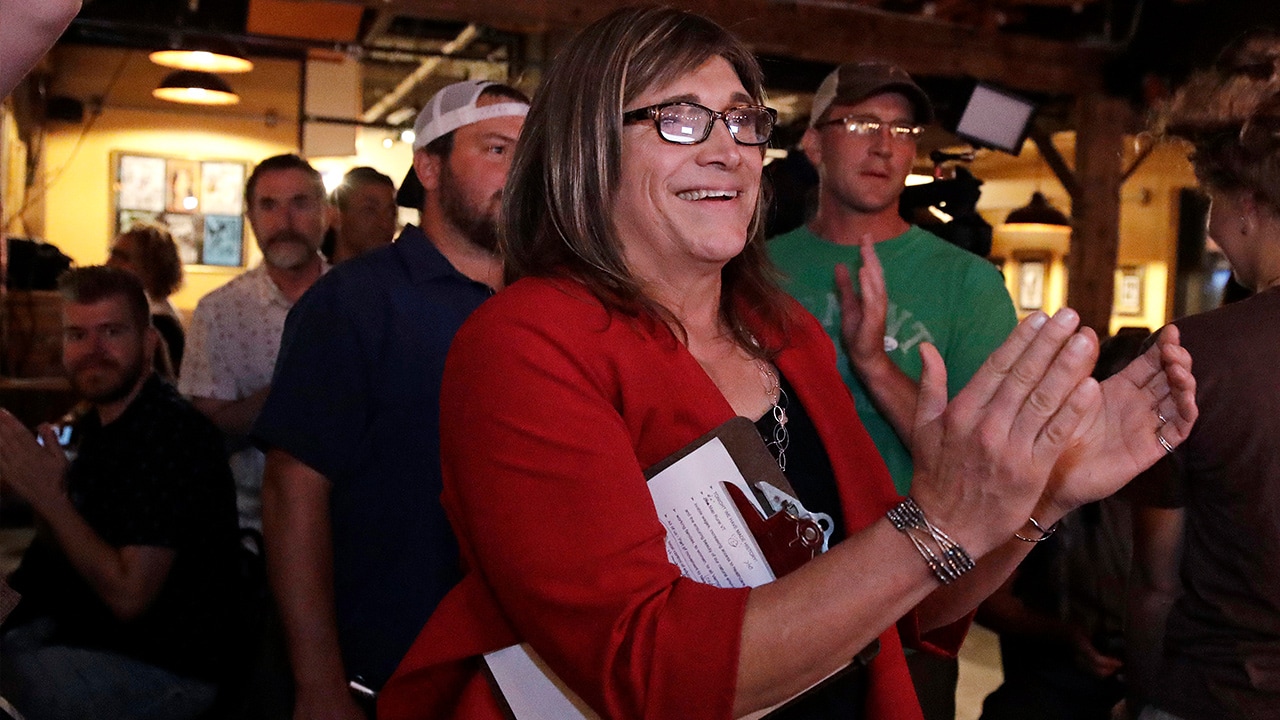 ST. PAUL, Minn. — Democrats embraced diversity Tuesday in a primary night of firsts, while Republicans in Minnesota rejected a familiar face of the GOP old guard in favor of a rising newcomer aligned with President Donald Trump.
In Vermont, Democrats rallied behind the nation’s first transgender nominee for governor. Minnesota Democrats backed a woman who would be the first Somali-American member of Congress. And in Connecticut, the party nominated a candidate who could become the first black woman from the state to serve in Congress.
Still, Democrats in Minnesota also backed a national party leader who is facing accusations of domestic violence. He has denied the allegations, yet they threaten to undercut enthusiasm in his state and beyond.
On the other side, Trump tightened his grip on the modern-day Republican Party as the turbulent 2018 primary season lurched toward its finale. A one-time Trump critic, former two-term Minnesota Gov. Tim Pawlenty, lost a comeback attempt he was expected to win.
All but 10 states picked their candidates for November’s general election by the time the day’s final votes were counted. While the full political battlefield isn’t quite set, the stakes are clear: Democrats are working to topple Republican control of Congress and governors’ offices across the nation.
Four states held primaries Tuesday: Vermont, Connecticut, Minnesota and Wisconsin. Kansas’ gubernatorial primary, which was held last week, was finalized when Republican Gov. Jeff Colyer conceded defeat.

In Minnesota, Republican County Commissioner Jeff Johnson defeated Pawlenty, who once called Trump “unhinged and unfit” and was hoping to regain his old post. In Wisconsin, Gov. Scott Walker, endorsed just this week by Trump, won the right to seek a third term.
The president’s pick for Kansas governor, Secretary of State Kris Kobach, scored a delayed victory against Colyer, who became the first incumbent governor to fall this season.
In Vermont, Democrat Christine Hallquist won the Democratic nomination in her quest to become the nation’s first transgender governor. The former chief executive of Vermont Electric Cooperative bested a field of four Democrats that included a 14-year-old.
While she made history on Tuesday, Hallquist faces a difficult path to the governor’s mansion. Republican incumbent Phil Scott remains more popular with Democrats than members of his own party in the solidly liberal state.
Vermont Democrats also nominated Sen. Bernie Sanders, who hasn’t ruled out a second presidential run in 2020, for a third term in the Senate. The 76-year-old democratic socialist won the Democratic nomination, but he is expected to turn it down and run as an independent.
Democrats appeared particularly motivated in Wisconsin, where eight candidates lined up for the chance to take on Walker.
Walker’s strong anti-union policies made him a villain to Democrats long before Trump’s rise. State schools chief Tony Evers, who has clashed with Walker at times, won the Democratic nomination and will take on Walker this fall. 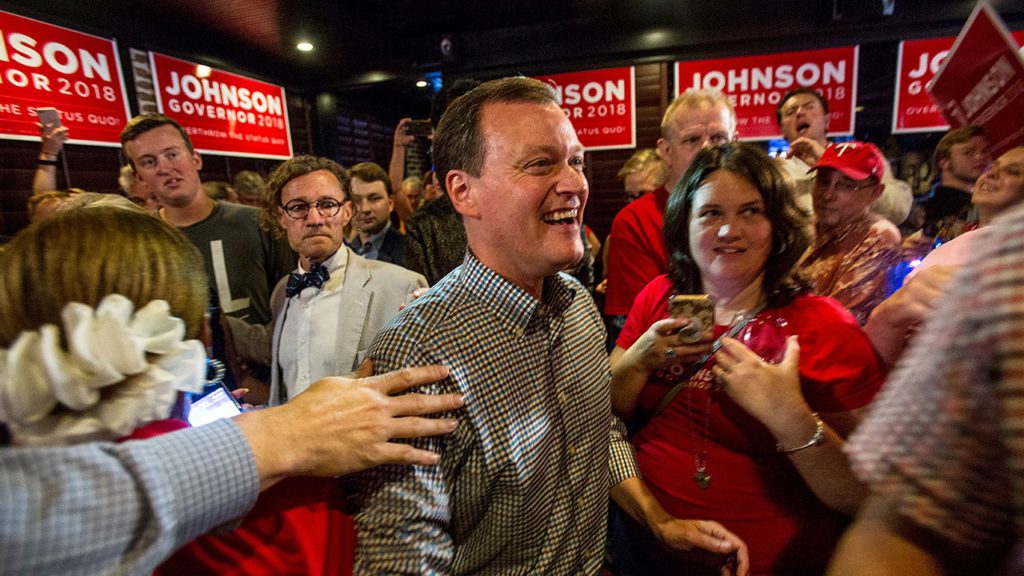 Minnesota gubernatorial candidate Jeff Johnson, center, is greeted by his supporters after returning to the watch party. (Alex Kormann/Star Tribune via AP)

Once a target of Trump criticism, Walker gained the president’s endorsement in a tweet Monday night calling him “a tremendous Governor who has done incredible things for that Great State.”
Trump also starred, informally at least, in Wisconsin’s Senate primaries as Republicans try to deny Democratic Sen. Tammy Baldwin a second term.
Longtime state lawmaker Leah Vukmir, who was backed by House Speaker Paul Ryan, won the Republican primary, even after struggling to explain footage recently unearthed from 2016 in which she called Trump “offensive to everyone.”
Tuesday’s primaries served as a test of Democratic enthusiasm in the upper Midwest, a region that has long been associated with liberal politics but has been trending red. Trump won Wisconsin by less than 1 percentage point in 2016, becoming the first Republican presidential candidate to carry the state since 1984.
It was much the same in Minnesota, where Trump lost by less than 3 percentage points in a state that hasn’t backed a Republican presidential contender since 1972.
Nearly twice as many Minnesota Democrats as Republicans cast ballots in their parties’ respective gubernatorial primaries.
Pawlenty had been considered the heavy favorite in a two-person Republican contest for his old job. But he struggled to adapt to a GOP that had changed drastically since he left office in 2011 and flamed out early in a 2012 presidential bid.
The former two-term governor strained to live down his October 2016 comment that Trump was “unhinged and unfit for the presidency,” remarks that incensed many Republican voters in Minnesota and beyond. Johnson, his underfunded opponent, circulated Pawlenty’s critique far and wide, telling voters that he was a steadfast supporter of the president.
Johnson will face Democratic Rep. Tim Walz, who won a three-way race for his party’s nomination.

Three Minnesota women won Senate nominations, including incumbent Democrats Amy Klobuchar and Tina Smith.
Smith, who had been appointed to replace disgraced Democrat Al Franken, will face Republican state Sen. Karin Housley, ensuring a woman will hold the seat once held by Franken, who left Congress amid allegations of sexual misconduct toward women.
Nationwide, a record number of women are running this year for governor and Congress.
Meanwhile, a new scandal threatened to dampen Democratic enthusiasm.
Rep. Keith Ellison, the Democratic National Committee’s deputy chairman, captured his party’s nomination in the race to become the state’s attorney general. That’s after Ellison’s candidacy was rocked by allegations over the weekend of domestic violence amid a broader national outcry against sexual misconduct by powerful men in business, entertainment and politics.
Ellison has denied a former girlfriend’s allegations that he dragged her off a bed while screaming obscenities during a 2016 relationship she said was plagued by “narcissistic abuse.”
Also in Minnesota, Democrat Ilhan Omar, the nation’s first Somali-American legislator, won her party’s congressional primary in the race to replace Ellison.
In Connecticut, Republican businessman Bob Stefanowski emerged from a field of five Republicans seeking to replace the unpopular outgoing governor, Democrat Dan Malloy. Former gubernatorial candidate Ned Lamont won the Democratic nomination.
Connecticut Democrats picked a former teacher of the year, Jahana Hayes, to run for the seat vacated by Rep. Elizabeth Etsy, who is leaving Congress after bungling sexual abuse claims levied against a former staffer. Hayes could become the first black woman from the state to serve in Congress.