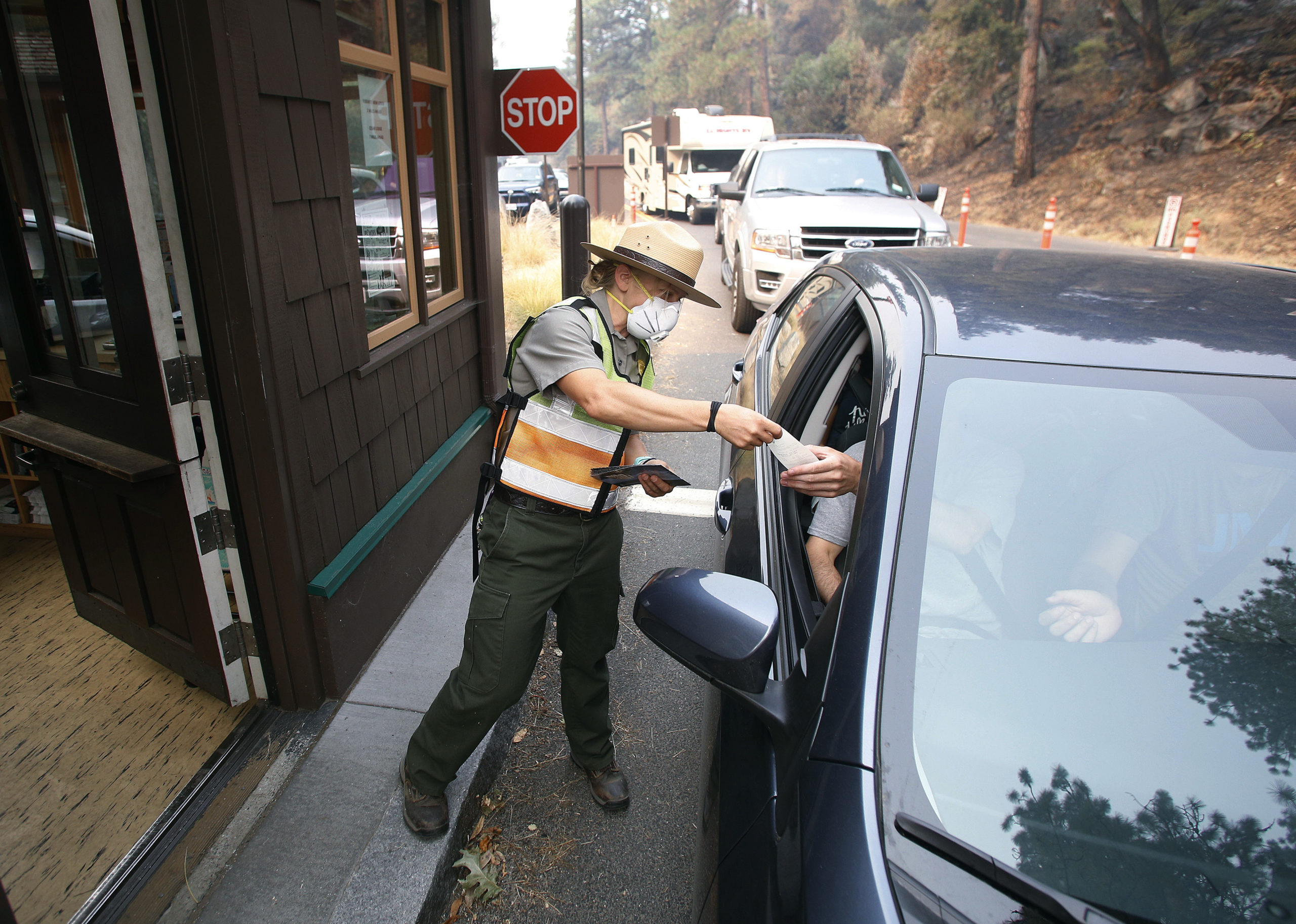 Hikers and nature lovers returned to Yosemite National Park’s scenic valley Tuesday after a rare 20-day closure because of smoke from wildfires. Some said they didn’t mind the hazy air that obscured scenic vistas; others came prepared with eye drops and face masks.
Park officials also advised visitors to expect limited lodging and food services at Yosemite, one of the busiest national parks in the U.S., as it gets back to full speed following the longest closure in decades.
In Montana, hundreds of people were hastily evacuated from Glacier National Park where a wildfire destroyed at least nine homes and cabins in one of the park’s historic districts.
The hit to national parks comes as wildfires continue to rage across parts of the West. California, like several other states, has faced a longer and more destructive wildfire season because of drought, warmer weather attributed to climate change and homes built deeper into forests.
Yosemite’s closure came at the height of tourist season, costing the park and nearby communities millions of dollars. The park draws more than 600,000 visitors during a typical August, according to the National Park Service.

Undeterred by lingering haze, cars packed with visitors lined Yosemite’s entrance gates.
“It’s smoky, but you can see most of the mountains — just not the tops,” said Dutch tourist Gert Lammers, who entered a gate on the western side of the park near the town of El Portal, driving past fire crews and burned out cars and structures.


“Normally, I’d see mountains. On the left side you would see Half Dome from here, and you’d see Glacier Point. But you can’t see any of it. You can just see outlines.” — Michael Aitken, Yosemite National Park tourist
“We feel lucky that it’s open today,” said Lammers, 48, who heads back to Holland on Friday after a three-week tour of California with his wife and two children.
Others packed special gear.
“I brought face masks for breathing, and I brought eye drops because the smoke will irritate your eyes,” said Michael Aitken, 57, who has a permit to climb Half Dome later this week.
Standing at the usually scenic Tunnel View, Aitken listed what he could not see.
Tens of thousands of visitors from across the globe had to cancel trips to Yosemite, which closed its valley and other areas on July 25 because of smoke from the Ferguson Fire. The wildfire has burned 150 square miles and killed two firefighters since it started July 13. Though the blaze didn’t reach the heart of Yosemite Valley, it burned in remote areas of the park and choked popular areas with smoke.
Some fires still burned on hillsides near the park’s borders, several miles from the scenic valley.
As of Tuesday, all of the park was reopened except a major road from the south, Highway 41, and a popular park attraction known as Glacier Point that is expected to remain closed for at least another week, park officials said.

Yosemite spokeswoman Jamie Richards said Yosemite was still calculating the financial impacts, noting not all campsites were reopening immediately and visitors should check the park’s website to see what services were still closed.
“We are working to get campgrounds back up and running,” Richards said, adding that food services were also not yet running at full capacity.


“The problem is the air quality in the valley. That’s what people are afraid of. People are still canceling because of the smoke.” — Neal Misener, owner of Cozy Bear Cottages
Air quality in the park will vary depending on the time of day and location.
“You are going to smell and see smoke,” Richards said, adding, however, that from her office in Yosemite Valley she was looking out at clear, blue skies Tuesday morning.
While hotel owners and other businesses are relieved about the reopening, they say it will likely be weeks before bookings return to normal.
Neal Misener, the owner of Cozy Bear Cottages, a small lodge in Yosemite, said the closure has brought business to a painful halt.
“It basically put us out of business,” he said, estimating lost revenue up to $35,000. Even though Yosemite Valley is back open, people are still canceling reservations.

Getting the Word Out

Officials are trying to get the word out that the park is back open. They have posted pictures of themselves and visitors at attractions holding red paddleboards reading #YosemiteNOW, and they’re encouraging visitors to do the same.
Visitors’ bureaus in the area and the park are estimating roughly $50 million in combined tourism losses, said Steve Montalto, creative director at Visit Yosemite Madera County.
As for the park, the dent in visitor fees will affect improvements, such as fixing roads and updating facilities, Yosemite spokesman Scott Gediman said.
Because those projects are planned years in advance, all improvements for 2018 will be covered, but future projects will be affected, Gediman said, though it was too soon to know which ones.
The fire near Yosemite is one of several devastating blazes in California that have killed at least a dozen people — the latest being a firefighter from Utah who died Monday while battling the largest fire in recorded state history north of San Francisco.

Fire officials said Wednesday morning that the 34-day-old Ferguson Fire was 87% contained. It has scorched 96,810 acres.