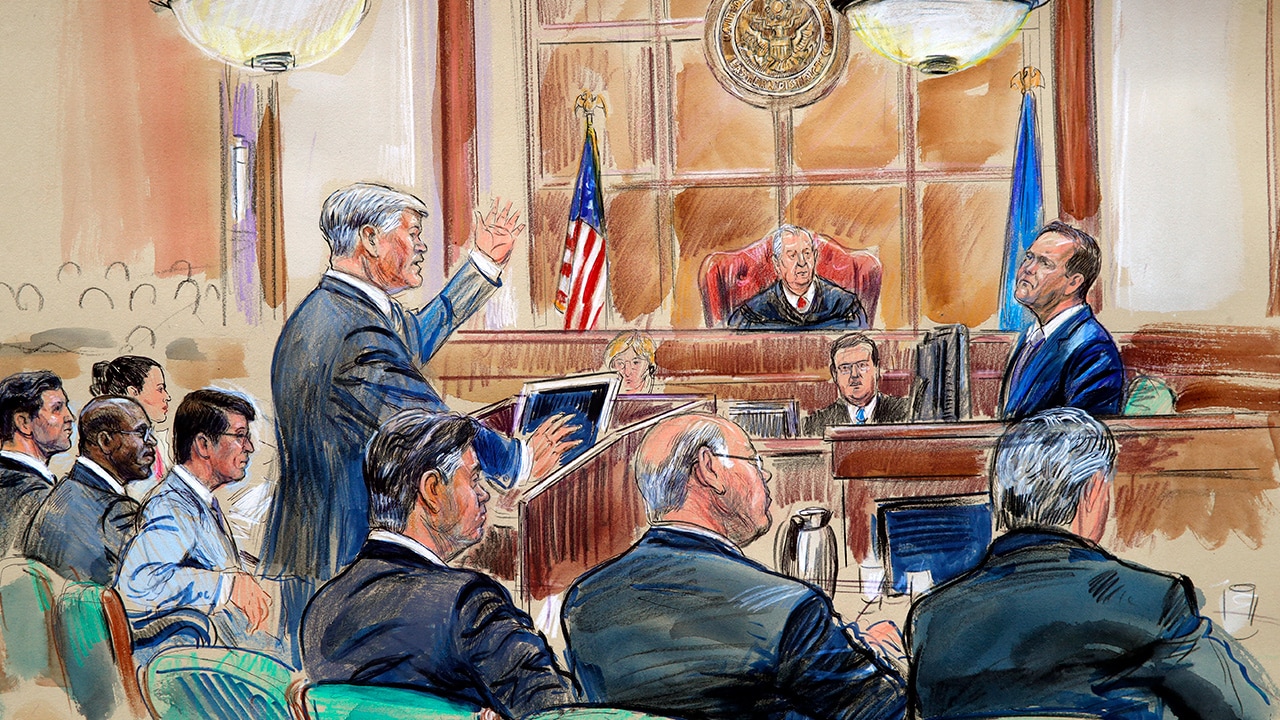 ALEXANDRIA, Va. — The star witness in Paul Manafort’s financial fraud trial says the former Trump campaign chairman told him to be truthful about offshore shell companies and bank accounts during a 2014 interview with the FBI.
Rick Gates said under questioning from Manafort’s lawyer Wednesday that he told FBI agents and Justice Department lawyers about some of the offshore companies that contained millions of dollars in proceeds from their Ukrainian political work.
The lawyer, Kevin Downing, was trying to counter earlier testimony that Manafort had encouraged Gates to deceive authorities by directing him to help conceal his foreign income and to submit phony mortgage and tax documents on his behalf.
The interview was part of an FBI investigation that sought to recover assets looted from the Ukrainian government under the rule of former President Viktor Yanukovych. Prosecutors have noted that Gates and Manafort were not the targets of the investigation at the time of the interview.

Defense lawyers wrapped up their questioning of Gates Wednesday following a bruising cross-examination that focused on Gates’s own crimes, an extramarital affair and a guilty plea with special counsel Robert Mueller’s office that may spare him severe punishment.
Manafort’s lawyers are determined to impugn the credibility of Gates, who pleaded guilty in Mueller’s investigation and agreed to cooperate with investigators by testifying in the financial fraud trial.
“After all the lies you’ve told and the fraud you’ve committed, you expect this jury to believe you?” Downing asked incredulously.
Gates said he did, but the defense lawyer wasn’t satisfied. He scoffed at the idea that Gates had repented for his actions, noting that prosecutors have said they won’t oppose his bid for probation and getting him to acknowledge he had not repaid the money he had taken from Manafort.
After Gates described his theft as “unauthorized transactions” instead of embezzlement, Downing prodded him to use the latter term — and Gates ultimately relented, saying, “It was embezzlement from Mr. Manafort.”
Prosecutors had braced for the tough questioning by getting Gates to come clean about his own crimes. He told jurors how he disguised millions of dollars in foreign income as loans in order to lower Manafort’s tax bill. Gates recounted how he and Manafort used more than a dozen offshore shell companies and bank accounts in Cyprus to funnel the money, all while concealing the accounts and the income from the IRS.

Keeping up With the Lies

But the grilling got more intense, and personal, Tuesday afternoon when Downing pressed Gates about a “secret life” he said was funded by embezzlement, including an extramarital affair that Gates himself acknowledged. Gates also said he may have submitted personal expenses for reimbursement by Trump’s inaugural committee, which he helped operate.
After Gates struggled to recall precisely what he had told Mueller’s team, Downing asked if he had been confronted with “so many lies” that he can’t keep his story straight.
Gates implicated himself in broad criminal conduct on the stand, an apparent strategic decision by prosecutors to take some of the steam out of defense questioning. He told jurors he embezzled from Manafort by filing false expense reports. He also said he committed credit card and mortgage fraud, falsified a letter for a colleague involved in an investment deal and made false statements in a deposition at Manafort’s direction.
Prosecutors summoned Gates to give jurors the first-hand account of a co-conspirator they say helped Manafort carry out an elaborate offshore tax-evasion and bank fraud scheme. Gates testified that he and Manafort knew they were committing crimes for years, saying they had stashed money in foreign bank accounts and falsified bank loan documents.
“In Cyprus, they were documented as loans. In reality, it was basically money moving between accounts,” Gates said. 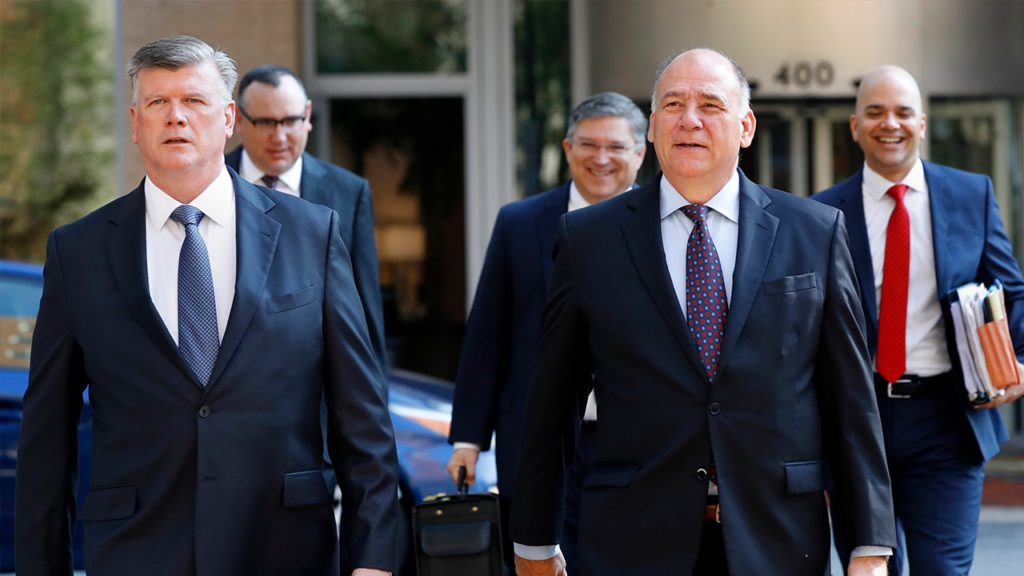 Kevin Downing, left, and Thomas Zehnle, the attorneys for Paul Manafort, arrive for the trial as it continues in federal court in Alexandria, Va., Tuesday, Aug. 7, 2018. (AP Photo/Jacquelyn Martin)

Potential Ties Between Russia and the Trump Campaign


“WTF. How could I be blindsided like this. You told me you were on top of this. We need to discuss options. This is a disaster.” — Paul Manafort to Rick Gates via email
The case has little to do with either man’s work for the Trump campaign and there’s been no discussion during the trial about whether the Trump election effort coordinated with Russia — the central question Mueller’s team has tried to answer. But Trump has shown interest in the proceedings, tweeting support for Manafort.
On Tuesday, Gates did connect one part of the bank fraud charges against Manafort to his role in the Trump campaign.
He said Manafort asked for tickets to Trump’s inauguration so he could give them to a banker involved in approving a loan at the center of his financial fraud trial. Gates also said Manafort floated banker Stephen Calk’s name for consideration as secretary of the Army, a post he ultimately did not get. The email exchange occurred after Manafort left the Trump campaign but while Gates was active on the Trump inauguration committee.
Gates described to jurors how he repeatedly submitted fake financial documents at Manafort’s behest as his former boss became concerned he was paying too much in taxes and later, that his funds were drying up.
In other testimony, Gates recounted how he converted a PDF of a profit-and-loss statement to a Microsoft Word document so he could doctor it to inflate the business’ income. Gates also fabricated a forgiveness letter for what he said was already a fake loan between Manafort’s consulting company and a Cypriot entity he controlled.
During the testimony, Manafort did not stare Gates down as he did Monday. When the trial broke for lunch, Manafort looked back at his wife, sitting in the front row, smiled and winked at her, followed by a quick shake of his head, seeming to indicate he was unfazed by the morning’s testimony.
Related Topics:embezzlementforeign incomefraud trialinvestigationoffshore companiesPaul ManafortRick Gates
Up Next

After Twitter Threat, Janz Carries On with Town Hall