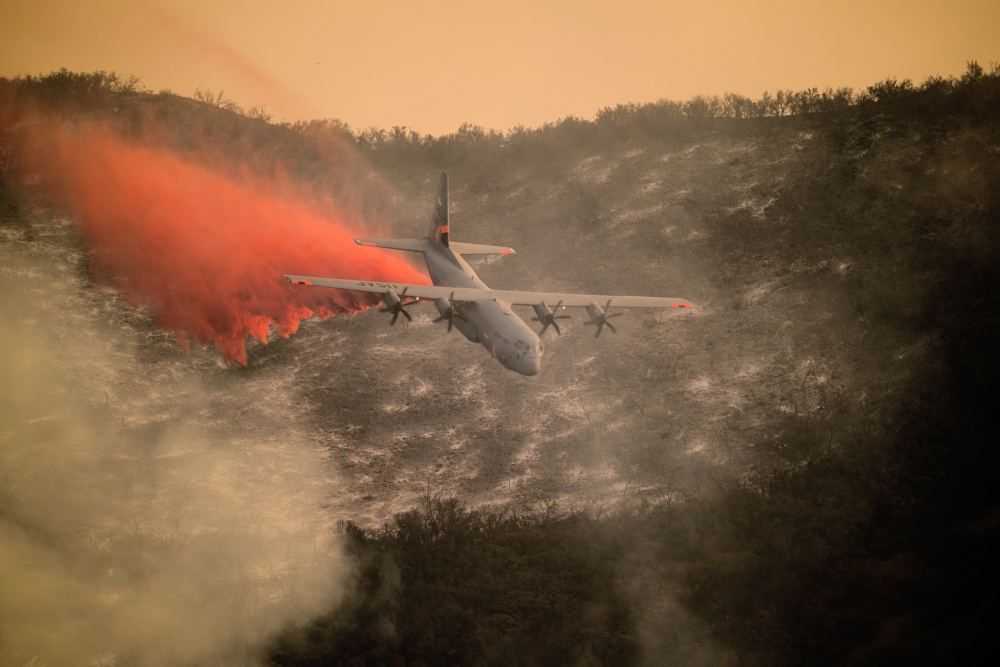 Thanks to Congress, California has a good chance of getting more aid in fighting its deadly wildfires.
Earlier this week, the U.S. Senate passed Sen. Dianne Feinstein’s (D-California) provision to transfer seven C-130H air tankers to California to help fight deadly wildfires.


“This would be a big step for us.” — Cal Fire Deputy Chief Scott McLean
The provision is included in the National Defense Authorization Act. The defense policy bill, which authorizes a $717 billion budget, requires the president’s signature.

The passage of the provision is critical, especially since last year was the worst wildfire season on record for California.
In 2017, more than 9,500 fires burned throughout the state, consuming more than 1.2 million acres, destroying more than 10,800 structures and killing 46 people.


“If the Guardian gets approved then we can start taking care of our home state.” — Rick Goddard, managing director for Caylym Technologies International in Fresno
This year already, more than 4,000 wildfires have burned at least 144,000 acres in California.
In addition, the speed of the blazes is posing heightened dangers to firefighters and residents.
Winds in a “fire whirl” created July 26 near Redding reached speeds of 143 mph, a speed that rivaled some of the most destructive Midwest tornados, National Weather Service meteorologist Duane Dykema told Associated Press. The whirl uprooted trees and tore roofs from homes, Dykema said.
Cal Fire now has 22 air tankers in its fleet as well as a dozen helicopters and 17 air tactical aircraft.

The seven C-130H aircraft, which are in the U.S. Coast Guard fleet, would transfer to Cal Fire under the NDAA provision.
The Lockheed C-130 can drop almost three times the amount of fire retardant as the Grumman-built S-2 air tankers now in Cal Fire’s fleet.
“This would be a big step for us,” Cal Fire Deputy Chief Scott McLean told CNBC.


“Instead of spending $10 million to $11 million and putting a tank in this airplane, take the airplane in its original configuration and use our system.” — Rick Goddard, managing director for Caylym Technologies International in Fresno
McLean said the agency’s current S-2A tankers can drop about 1,200 gallons of fire retardant and the C-130 is capable of roughly 4,000 gallons of retardant. So it would allow the agency to pack more punch from each drop.

Rick Goddard, the managing director for Caylym Technologies International in Fresno, said the company’s Guardian system  — a 4-foot cardboard cube that can hold up to 264 gallons (about 1,000 liters) of liquid — can get over 4,200 gallons on a C-130.
Utilizing the Guardian system, Goddard said, would not only enable CalFire to fight fires more efficiently, but it would save the costs associated with adding tanks to the C-130s.
“Instead of spending $10 million to $11 million and putting a tank in this airplane, take the airplane in its original configuration and use our system,” Goddard said. “Then you can use the airplane for all kinds of other disaster relief things.”
In addition to being more expensive, Goddard said tank systems can really only hold 3,000 gallons of liquid or less.
“Usually they have to go less because the tank system itself weighs so much that it diminishes the amount of liquid you can take,” Goddard said. “When they load these tanks, they are only loading 2,400 to 2,800 gallons in the tank.”

Guardian Not Approved In California

However, the state hasn’t approved Caylym’s Guardian system. Not only that, but it hasn’t viewed the technology or allowed Caylym to demonstrate how the Guardian works. The company’s system is used to fight fires internationally.
Goddard said Caylym is committed to working with the state and is “certainly letting them know we are available to work with them,” Goddard said.
“I don’t know if it is just because it is a new idea, but we are committed to going through whatever they need us to go through,” Goddard said. “If the Guardian gets approved then we can start taking care of our home state.”