Trump Thanks Kim for Keeping Word on Korea War Remains 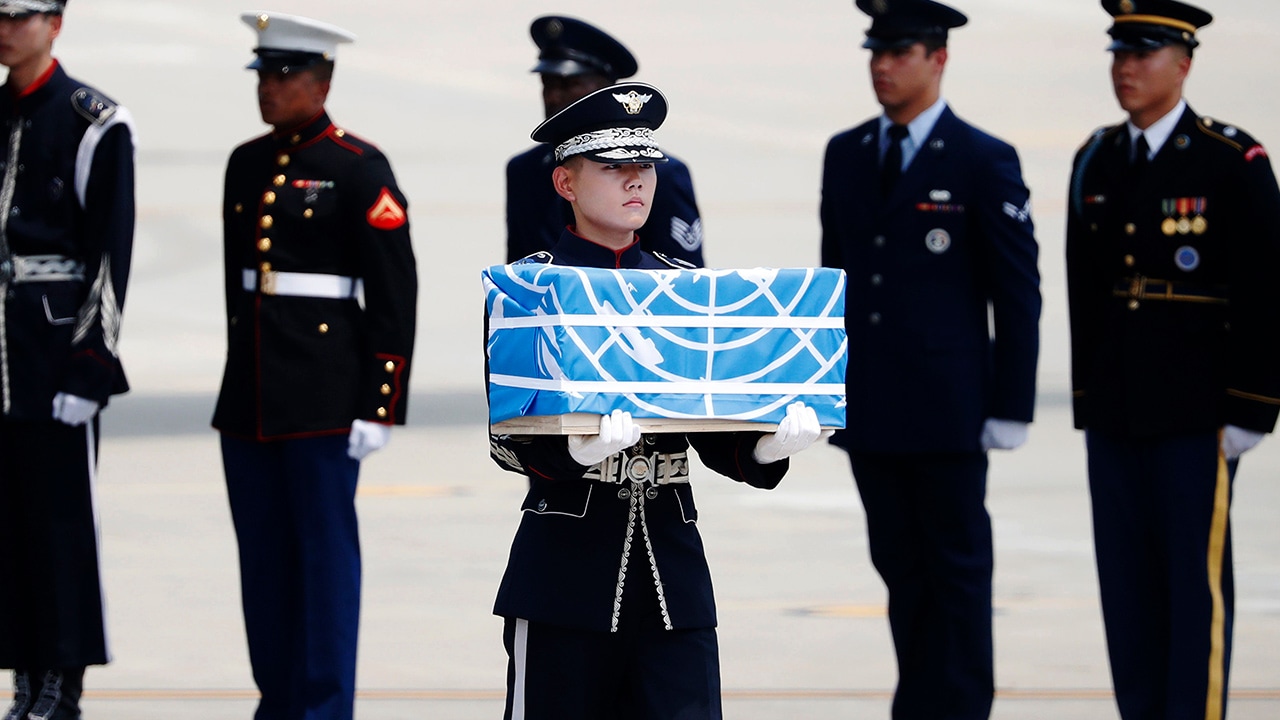 WASHINGTON — President Donald Trump thanked North Korean leader Kim Jong Un on Friday for “fulfilling a promise” to return the remains of missing U.S. soldiers from the Korean War, as a U.S. military plane made a rare trip into North Korea to retrieve 55 cases of remains.


“We have many others coming but I want to thank Chairman Kim in front of the media for fulfilling a promise that he made to me and I’m sure that he will continue to fulfill that promise as they search and search and search. These incredible American heroes will soon lay at rest on sacred American soil.” — President Donald Trump
North Korea returned the remains of what are believed to be U.S. servicemen killed during the Korean War, a handover that followed through on a promise Kim made to Trump when the leaders met in June in Singapore, the first tangible result from the much-hyped summit.
Trump, addressing reporters on the South Lawn, said a plane was carrying the remains “of some great fallen heroes from America back from the Korean War.” He said Vice President Mike Pence would greet the families and the remains of the soldiers, and the president thanked Kim “for keeping his word.”
The United Nations Command said 55 cases of remains were retrieved from North Korea. The White House earlier confirmed that a U.S. Air Force C-17 aircraft containing remains of fallen service members had departed Wonsan, a Northern coastal city, on its way to the Osan Air Base in Pyeongtaek, near the South Korean capital of Seoul. A formal repatriation ceremony will be held there Wednesday.
At the air base, U.S. servicemen and a military honor guard lined up on the tarmac to receive the remains, which were carried in boxes covered in blue U.N. flags.

About 7,700 U.S. soldiers are listed as missing from the 1950-53 Korean War, and 5,300 of the remains are believed to still be in North Korea. The war killed millions, including 36,000 American soldiers.
U.S. Forces Korea commander Gen. Vincent K. Brooks, in a statement from the U.N. Command, called the retrieval mission successful. “Now, we will prepare to honor our fallen before they continue on their journey home.”
Following the honors ceremony on Wednesday, the remains will be flown to Hawaii for scientific testing. A series of forensic examinations will be done to determine if the remains are human and if the dead were American or allied troops killed in the conflict.
Trump late Thursday tweeted the repatriation was occurring and said, “After so many years, this will be a great moment for so many families. Thank you to Kim Jong Un.”

Officials in North Korea had no comment on the handover on Friday, the 65th anniversary of the end of the Korean War, which the country celebrated as the day of “victory in the fatherland liberation war.”
Despite soaring rhetoric about denuclearization before Kim and Trump met in Singapore, their summit ended with only a vague aspirational goal for a nuclear-free Korean Peninsula without describing when and how that would occur.
The repatriation of remains could be followed by stronger North Korean demands for fast-tracked discussions to formally end the war, which was stopped with an armistice and not a peace treaty. South Korea’s Defense Ministry also said the North agreed to general-level military talks next week at a border village to discuss reducing tensions across the countries’ heavily armed border.
The U.S. military last month said that 100 wooden “temporary transit cases” built in Seoul were sent to the Joint Security Area at the Korean border as part of preparations to receive and transport remains in a dignified manner. U.S. Forces Korea spokesman Col. Chad Carroll also said, at the time, that 158 metal transfer cases were sent to a U.S. air base and would be used to send the remains home.
The remains are believed to be some of the more than 200 that North Korea has held in storage for some time, and were likely recovered from land during farming or construction. The vast majority of the war dead, however, have yet to be located and retrieved from cemeteries and battlefields across the countryside.

Efforts to recover American war dead had been stalled for more than a decade because of a standoff over North Korea’s nuclear program and a previous U.S. claim that security arrangements for its personnel working in the North were insufficient.
From 1996 to 2005, joint U.S.-North Korea military search teams conducted 33 recovery operations that collected 229 sets of American remains. The last time North Korea turned over remains was in 2007, when Bill Richardson, a former U.N. ambassador and New Mexico governor, secured the return of six sets.
The North marked Friday’s anniversary with ceremonies at war-related memorials; the capital Pyongyang and other cities were decked out in national flags and bright red banners. For the first time since 2015, Kim Jong Un has announced a general amnesty will be granted for prisoners who have committed crimes against the state.
North Korea has held out the return of remains as a symbol of its goodwill and intention to improve ties with Washington. Officials have bristled, however, at criticism from the U.S. that it seeks to profit from the repatriations by demanding excessive fees for handling and transporting the remains.
Pyongyang has nevertheless expressed its willingness to allow the resumption of joint search missions in the country to retrieve more remains. Such missions had been held from 1996 until they were cancelled by President George W. Bush amid heightening tensions over the North’s nuclear program in 2005. 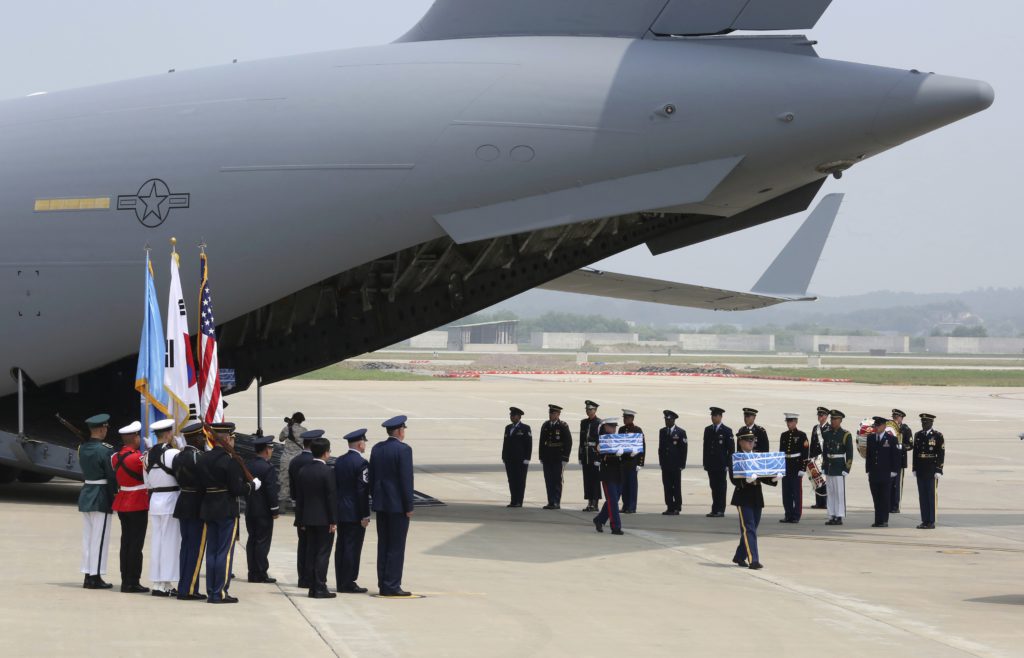 A U.N. honor guard carries a casket containing remains believed to be from American servicemen killed during the 1950-53 Korean War after arriving from North Korea, at Osan Air Base in Pyeongtaek, South Korea. (AP Photo/Ahn Young-joon, Pool)

Post Kim-Trump summit talks between U.S. Secretary of State Mike Pompeo and senior North Korean officials got off to a rocky start earlier this month, with the North accusing the Americans of making “unilateral and gangster-like” demands on denuclearization. The North also said U.S. officials came up with various “conditions and excuses” to backtrack on the issue of formally ending the war.
“The adoption of the declaration on the termination of war is the first and foremost process in the light of ending the extreme hostility and establishing new relations between the DPRK and the U.S.,” the North’s Korean Central News Agency said in a statement on Tuesday, referring to North Korea by its official name, the Democratic People’s Republic of Korea. “Peace can come only after the declaration of the termination of war.”
Pompeo said Wednesday that a great deal of work remains ahead of a North Korea denuclearization deal, but he dodged requests to identify a specific denuclearization timeline in testimony to members of the Senate Foreign Relations Committee.
Experts say a declaration to officially end the war, which could also involve Seoul and Beijing, would make it easier for Pyongyang to steer the discussions with Washington toward a peace treaty, diplomatic recognition, security assurance and economic benefits. Some analysts believe that North Korea would eventually demand that the United States withdraw or dramatically reduce the 28,500 troops it keeps in South Korea as a deterrent.
Washington has maintained Pyongyang wouldn’t get sanctions relief and significant security and economic rewards unless it firmly commits to a process of completely and verifiably eliminating its nuclear weapons. There are lingering doubts on whether Kim would ever agree to fully relinquish his nukes, which he may see as a stronger guarantee of survival than whatever security assurance the United States could offer.