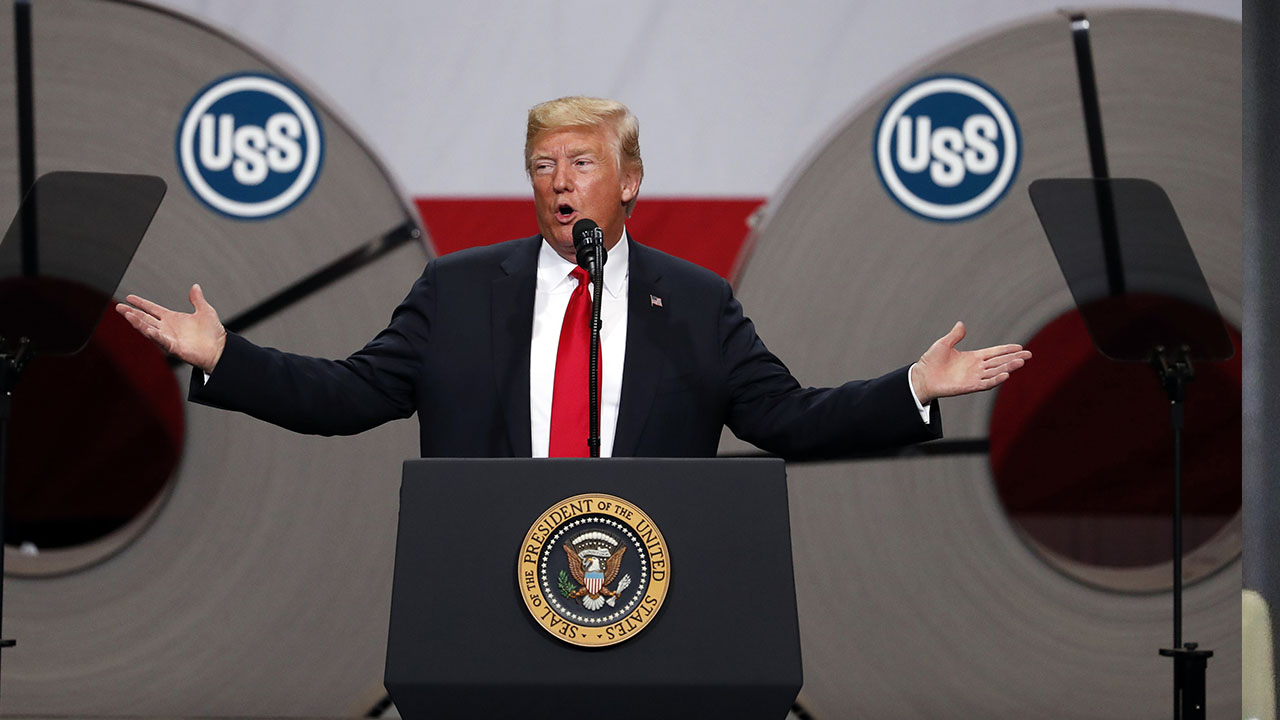 WASHINGTON— President Donald Trump falsely claimed Friday he’s pulled off “an economic turnaround of historic proportions.”
Speaking at the White House after the government reported that the economy grew at an annual rate of 4.1 percent in the second quarter, Trump declared that the gains were sustainable and would only accelerate. Few economists outside the administration agree with this claim.
His remarks followed events Thursday in Iowa and Illinois, where Trump falsely repeated a claim that the U.S. economy is the best “we’ve ever had” and incorrectly asserted that Canada’s trade market is “totally closed.”
Here’s a look at the claims:

TRUMP: “We’ve accomplished an economic turnaround of historic proportions.” — remarks Friday at the White House.
THE FACTS: Trump didn’t inherit a fixer-upper economy.
The U.S. economy just entered its 10th year of growth, a recovery from the Great Recession that began under President Barack Obama. The data show that the falling unemployment rate and gains in home values reflect the duration of the recovery, rather than any major changes made since 2017 by the Trump administration.
While Trump praised the 4.1 percent annual growth rate in the second quarter, it exceeded that level four times during the Obama presidency. But quarterly figures are volatile and strength in one quarter can be reversed in the next. While Obama never achieved the 3 percent annual growth that Trump hopes to see, he came close. The economy grew 2.9 percent in 2015.
The economy faces two significant structural drags that could keep growth closer to 2 percent than 3 percent: an aging population, which means fewer people are working and more are retired, and weak productivity growth, which means that those who are working aren’t increasing their output as quickly as in the past.
Both of those factors are largely beyond Trump’s control.

TRUMP: “One of the biggest wins in the report, and it is, indeed a big one, is that the trade deficit — very dear to my heart because we’ve been ripped off by the world — has dropped.”
THE FACTS: Trump is correct that a lower trade deficit helped growth in the April-June quarter, but it’s not necessarily for a positive reason.
The president has been floating plans to slap import taxes on hundreds of billions of dollars of foreign goods, which has led to the risk of retaliatory tariffs by foreign companies on U.S. goods.
This threat of an escalating trade war has led many companies to increase their levels of trade before any tariffs hit, causing the temporary boost in exports being celebrated by Trump.
Richard Moody, chief economist at Regions Financial, said the result is that the gains from trade in the second quarter will not be repeated.

TRUMP: “We’re having the best economy we’ve ever had in the history of our country.” — remarks in Granite City, Illinois.
THE FACTS: Even allowing for Trump’s tendency to exaggerate, this overstates things.
The unemployment rate is near a 40-year low and growth is solid, but by many measures the current economy trails other periods in U.S. history. Average hourly pay, before adjusting for inflation, is rising at about a 2.5 percent annual rate, below the 4 percent level reached in the late 1990s when the unemployment rate was as low as it is now.
Pay was growing even faster in the late 1960s, when the jobless rate remained below 4 percent for nearly four years. And economic growth topped 4 percent for three full years from 1998 through 2000, an annual rate it hasn’t touched since.

TRUMP: “The Canadians, you have a totally closed market … they have a 375 percent tax on dairy products, other than that it’s wonderful to deal. And we have a very big deficit with Canada, a trade deficit.” — remarks in Peosta, Iowa.
THE FACTS: No, it’s not totally closed. Because of the North American Free Trade Agreement, Canada’s market is almost totally open to the United States. Each country has a few products that are still largely protected, such as dairy in Canada and sugar in the United States.
Trump also repeated his claim that the U.S. has a trade deficit with Canada, but that is true only in goods. When services are included, such as insurance, tourism, and engineering, the U.S. had a $2.8 billion surplus with Canada last year.

Trump Claims US is 'Economic Envy of the Entire World'