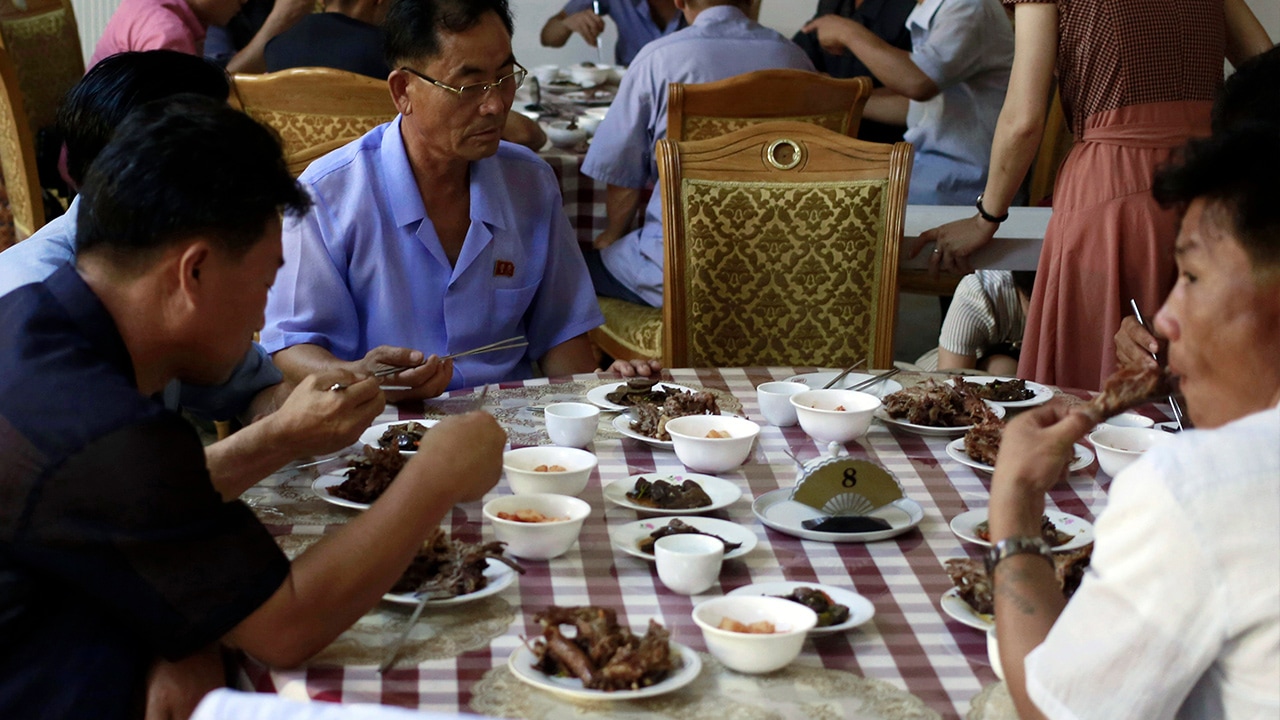 PYONGYANG, North Korea — In North Korea, summer is not a good time to be a dog.
In the sizzling heat, North Korea’s biggest brewery is pumping out twice as much beer as usual, Pyongyang residents are lining up to get their “bingsu” — a syrupy treat made with shaved ice — and restaurants are serving up bowl after bowl of the season’s biggest culinary attraction: spicy dog meat soup.
Euphemistically known as “dangogi,” or sweet meat, dog has long been believed to be a stamina food in North and South Korea and is traditionally eaten during the hottest time of the year, giving a sad twist to the old saying “dog days of summer.”
The dates are fixed according to the lunar calendar and dog meat consumption centers around the “sambok,” or three hottest days — July 17 and 27, and Aug. 16 this year. Demand appears to be especially high this year because of a heatwave in East Asia. Temperatures in the North have been among the highest ever recorded, hovering near 40 degree Celsius (104 Fahrenheit) in several cities.
As is the case with almost everything, good statistics are not available for how much dog is eaten in the North.

But in South Korea, where even President Moon Jae-in has dogs as pets, at least 2 million canines are slaughtered and eaten each year even though its popularity as food is waning. While many older South Koreans believe dog meat aids virility, younger people generally are either against the practice or indifferent to it and there has been increasing pressure to ban it altogether.
On both sides of the Demilitarized Zone, dogs used for their meat are raised on farms for that express purpose.


“It’s been our national food since olden times. People believe that heat cures heat, so they eat dog meat and spicy dog soup on the hottest days. It’s healthier than other kinds of meat.” — Kim Ae Kyong, a waitress at the Pyongyang House of Sweet Meat
The restaurant’s menu lists more than a dozen dog dishes, including ribs, hind legs and boiled dog skin.

Like their neighbors to the South, North Korean attitudes toward dogs are changing.
It is increasingly common to see people walking their dogs on leashes in Pyongyang and other cities in the North, a trend that seems to have just begun to catch on over the past few years. Feral dogs are common in the countryside, however, and left to fend for themselves.
How leader Kim Jong Un feels about all this isn’t known.
But in January he made a point of donating 30 pet dogs of seven breeds — including a bulldog — to Pyongyang’s newly renovated Central Zoo, where dogs are put on display much like the wild animals. The canine center at the zoo is, in fact, one of its most popular attractions, and posters near the cages explain how to properly care for and feed — not eat — canine companions.

Mass Funerals Held in Southern Syria Day After IS Attacks