VATICAN CITY — Revelations that one of the most respected U.S. cardinals repeatedly sexually abused both boys and adult seminarians have raised questions about who in the Catholic Church hierarchy knew — and what Pope Francis is going to do about it.

If the accusations against Cardinal Theodore McCarrick bear out — including a new case reported Friday involving an 11-year-old boy — will Francis revoke his title of cardinal? Sanction him to a lifetime of penance and prayer? Or even defrock him, the expected sanction if McCarrick were a mere priest?

And will Francis, who has already denounced a “culture of cover-up” in the church, take the investigation all the way to the top, where it will inevitably lead, given that McCarrick’s sexual misdeeds with adults were reportedly brought to the Vatican’s attention years ago?

The matter is on the desk of the pope, who has already spent the better part of 2018 dealing with a spiraling child sex abuse, adult gay sex and cover-up scandal in Chile that was so vast the entire bishops’ conference offered to resign in May.

And just Friday, Francis accepted the resignation of the Honduran deputy to Cardinal Oscar Rodriguez Maradiaga, who is one of Francis’ top advisers.

Not even the serial rapist Rev. Marcial Maciel was defrocked after the Vatican finally convicted him of abusing Legion of Christ seminarians.

Auxiliary Bishop Juan José Pineda Fasquelle, 57, was accused of sexual misconduct with seminarians and lavish spending on his lovers that was so obvious to Honduras’ poverty-wracked faithful that Maradiaga is now under pressure to reveal what he knew of Pineda’s misdeeds and why he tolerated a sexually active gay bishop in his ranks.

The McCarrick scandal, too, poses the same questions, given it was apparently an open secret in some U.S. church circles that “Uncle Ted” invited seminarians to his beach house, and into his bed.

Pope Will Be Pressured To Defrock the Guilty

While such an abuse of power may have been quietly tolerated for decades, it doesn’t fly in the #MeToo era, even though there has been a deafening silence from McCarrick’s brother cardinals about what they might have known and when.

“There is going to be so much clamor for the Holy Father to remove the red hat, to formally un-cardinalize him,” said the Rev. Thomas Berg, vice rector and director of admissions at St. Joseph’s Seminary in Yonkers, the seminary of the archdiocese of New York.

Recounting how the McCarrick scandal has demoralized seminarians and priests alike, Berg said the church needs to ensure that men with same-sex attraction simply don’t enter seminaries — a position recently reinforced by Francis in reference to both the Chilean and Italian churches.

And Berg said the church needs to take action when celibacy vows are violated.

“We can’t effectively prevent the sexual abuse of minors or vulnerable adults by clergy while habitual and widespread failures in celibacy are quietly tolerated,” he said.

Multiple Complaints Made Against McCarrick

McCarrick, the 88-year-old retired archbishop of Washington and confidante to three popes, was ultimately undone when the U.S. church announced June 20 that Francis had ordered him removed from public ministry. The sanction was issued pending a full investigation into a “credible” allegation that he fondled a teenager more than 40 years ago in New York City.

The dioceses of Newark and Metuchen, New Jersey, simultaneously revealed that they had received three complaints of misconduct by McCarrick against adults and had settled two of them. 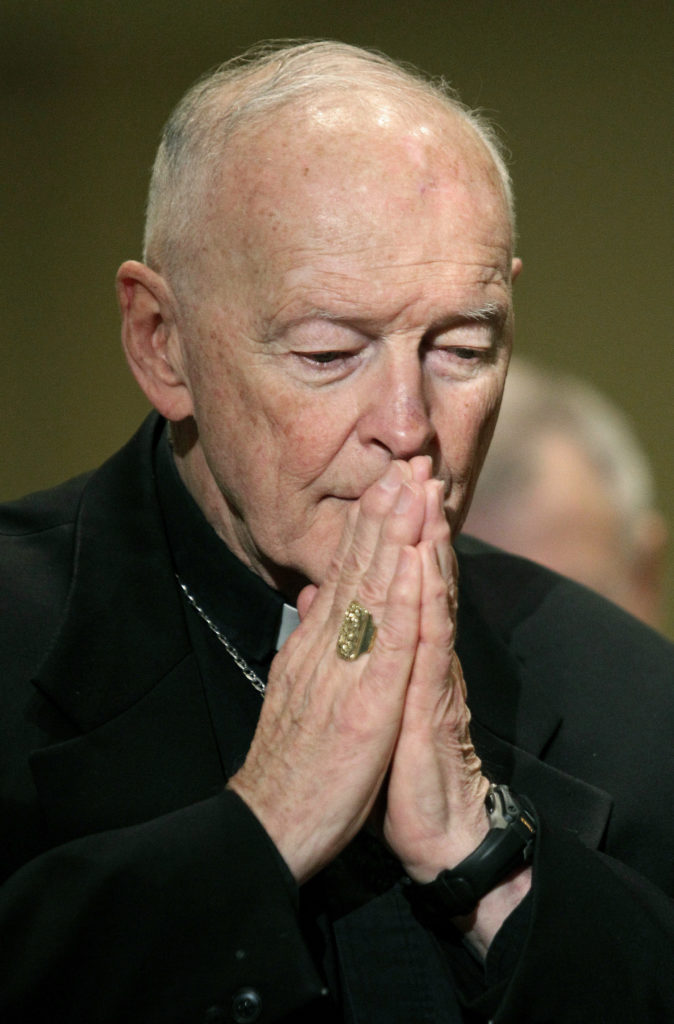 The New York Times on Friday reported details of another alleged victim, the son of a McCarrick family friend identified as James, who reported that he was 11 when McCarrick first exposed himself to him. From there, McCarrick began a sexually abusive relationship that continued for another two decades, the Times quoted James as saying.

McCarrick has denied the initial allegation of abuse against a minor and accepted the pope’s decision to remove him from public ministry.

Asked Friday about the latest revelations in the Times, a spokeswoman said McCarrick hadn’t received formal notice of any new allegation but would follow the civil and church processes in place to investigate them.

Francis could take immediate action to remove McCarrick from the College of Cardinals, said Kurt Martens, a canon lawyer at the Catholic University of America.

He recalled the case of the late Scottish Cardinal Keith O’Brien, who recused himself from the 2013 conclave that elected Francis pope after unidentified priests alleged he engaged in sexual misconduct. In 2015, after a Vatican investigation, Francis accepted O’Brien’s resignation after he relinquished the rights and privileges of being a cardinal.

O’Brien was, however, allowed to retain the cardinal’s title and he died a member of the college.

“I think that is totally unsatisfactory,” Martens said, noting that just as the pope can grant the title of cardinal, he can also take it away. “O’Brien resigned, the pope accepted it. Isn’t that the world upside down that someone picks his own penalty?”

O’Brien was never accused of sexually abusing a minor, however, as McCarrick now stands.

The stiffest punishment that an ordinary priest would face if such an accusation is proven would be dismissal from the clerical state, or laicization.

The Vatican rarely if ever, however, imposes such a penalty on elderly prelates. It also is loath to do so for bishops, because theologically speaking, defrocked bishops can still validly ordain priests and bishops.

Not even the serial rapist Rev. Marcial Maciel was defrocked after the Vatican finally convicted him of abusing Legion of Christ seminarians. Maciel was sentenced to a lifetime of penance and prayer — the likely canonical sanction for McCarrick if he is found guilty of abusing a minor in a church trial.