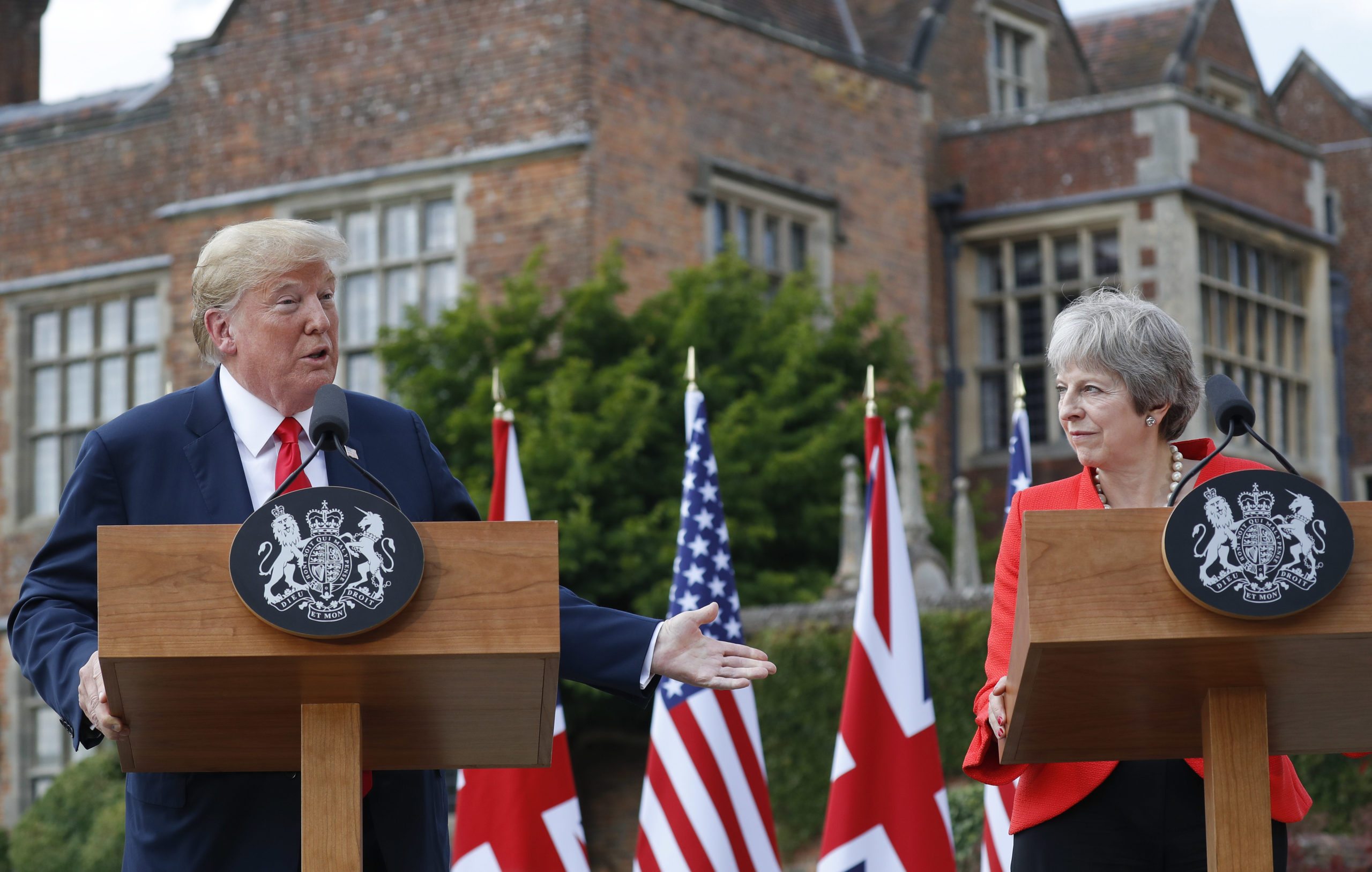 LONDON — Donald Trump has advised British Prime Minister Theresa May to “sue” the European Union to resolve the tense negotiations over Britain’s impending exit from the bloc.
The American president told reporters Friday at a joint press conference with May that he had given the British leader a suggestion that she found too “brutal.”Asked Sunday on the BBC’s Andrew Marr Show what that suggestion was, May said with an amused expression: “He told me I should sue the EU. Not go into negotiation, sue them.”
She quickly followed with a laugh: “Actually we’re going into negotiations with them.”
She added: “Interestingly, what the president also said at that press conference was ‘Don’t walk away. Don’t walk away from the negotiations. Then you’re stuck.’ ”

It wasn’t exactly clear what Trump meant, but the revelation capped a series of explosive and undiplomatic remarks Trump made this week about May’s leadership — especially her handling of the Brexit negotiations — as he made his first official visit to Britain.
In an interview with The Sun newspaper published Thursday — just as May was hosting Trump at a lavish black-tie dinner — Trump said the British leader’s approach likely “killed” chances of a free-trade deal with the United States. He said he had told May how to conduct Brexit negotiations, “but she didn’t listen to me.”
He also praised May’s rival, Boris Johnson, who quit last week as foreign secretary to protest May’s Brexit plans. Trump claimed Johnson would make a “great prime minister.”
The comments shocked many in Britain — even May’s opponents — and couldn’t have come at a worse time for May, who is facing a crisis over Brexit from within her own ranks. Her Conservative government is deeply split between supporters of a clean break with the EU and those who want to keep close ties with the bloc, Britain’s biggest trading partner.

The U.S. president later sought to soften the blow, telling reporters at Friday’s joint news conference that May was an “incredible woman” who is “doing a fantastic job” as prime minister.
He denied he criticized May, saying the Sun tabloid did not print his complimentary remarks about the British leader, but the Sun released audio that proved otherwise.
Asked to rate U.S.-U.K. relations, Trump gave them the “highest level of special.” He added it was up to May how to handle Brexit, though he wants to ensure the U.S. “can trade and we don’t have any restrictions” on commerce with the United Kingdom.
May’s government has just published its long-awaited Brexit plans, which propose to keep Britain and the EU in a free market for goods, with a more distant relationship for services. That has infuriated fervent Brexit supporters, who see it as a bad deal. Along with Johnson, the man who had been leading the Brexit negotiations, David Davis, also quit in protest.

May on Sunday warned party rebels they should fall into line, saying wrecking her Brexit blueprint could result in disaster.
“We need to keep our eyes on the prize. If we don’t, we risk ending up with no Brexit at all,” she wrote in the Mail on Sunday newspaper.
She acknowledged that some lawmakers had doubts about her plans to stick to a “common rulebook” with the bloc for goods and agricultural products in return for free trade, without tariffs or border customs checks, but insisted she couldn’t see a viable alternative.
Britain’s status as part of the EU’s single market and tariff-free customs union for goods will end after the U.K. leaves the bloc in March.