ELLESBOROUGH, England — In a fresh bout of diplomatic whiplash, President Donald Trump denied Friday he had criticized Prime Minister Theresa May and declared the U.S.-U.K. relationship “the highest level of special” — not long after lobbing thunderous broadsides against her.

Trump’s pomp-filled visit to the United Kingdom has been overshadowed by widespread protests and an explosive interview in The Sun in which he blasted May, his host, blamed London’s mayor for terror attacks against the city and argued that Europe was “losing its culture” because of immigration.

“I didn’t criticize the prime minister. I have a lot of respect for the prime minister,” said Trump, who allowed that he did apologize for some of his comments. But he blamed his favorite scapegoat — the so-called “Fake Media” — for skipping over his praise of May in a piece that published Thursday just as the prime minster played host at an opulent welcome dinner at a country palace.

The Sun is owned by Rupert Murdoch, a Trump ally.

The president then urged reporters to listen to a full recording of the interview, which he said would give the full picture.

May, for her part, praised the strength of the U.S.-U.K. bond. But in a gentle rebuke, said: “It is all of our responsibility to ensure that trans-Atlantic unity endures.”

As for her relationship with Trump, she said: “We are friends.”

Trump was greeted by massive protests across Britain, including tens of thousands of demonstrators who filled the streets of London alongside a giant balloon that flew over Parliament on Friday depicting him as a cell-phone-toting angry baby in a diaper.

In a frenetic news conference at Chequers, May’s official country house, an unrestrained Trump blamed his predecessor for Russian aggression in Crimea, placed fair trade at the center of Britain’s efforts to leave the European Union, defended his beliefs that immigration has damaged Europe and repeatedly jousted with television correspondents’ whose coverage he found critical.

Interviewed before he left Brussels for the U.K, Trump accused May of ruining what her country stands to gain from its Brexit vote to leave the European Union. He said her former foreign secretary, Boris Johnson, would make an “excellent” prime minister, speaking just days after Johnson resigned his position in protest over May’s Brexit plans.

Trump added that May’s “soft” blueprint for the U.K.’s future dealings with the EU would probably “kill” any future trade deals with the United States.

Trump, who has linked his own election to the June 2016 referendum in which a slim majority of British voters supported leaving the EU, complained, “The deal she is striking is a much different deal than the one the people voted on.”

He also told the tabloid that he’d shared advice with May during Britain’s negotiations with the EU and she ignored it.

Tens of thousands of people gathered in London for a series of demonstrations against the president’s visit. Marchers gathered near BBC headquarters in central London before walking through the center of the city to Parliament — where earlier the 20-foot baby blimp hovered overhead. 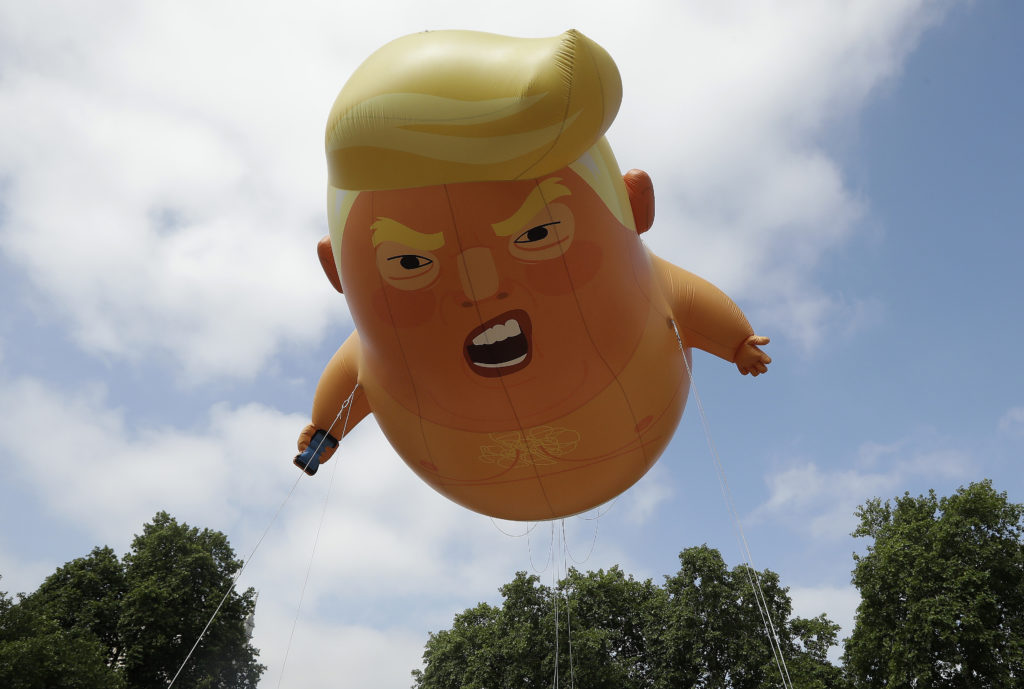 A six-meter high cartoon baby blimp of U.S. President Donald Trump is flown as a protest against his visit, in Parliament Square in London, England, Friday, July 13, 2018.  (AP Photo/Matt Dunham)

Many protesters used humor to convey their opposition. One sign read “Trump wears poorly tailored suits,” while another proclaimed: “Overcomb Brexit.” One man was selling rolls of “Trump toilet paper” emblazoned with a picture of the president. More protests are planned in Windsor, where the Trumps will meet the queen later, and in Scotland, where the president plans to spend the weekend at one of his golf courses.

“I guess when they put out blimps to make me feel unwelcome, no reason for me to go to London,” he told The Sun, which is owned by his media ally, Rupert Murdoch, owner of Fox News in the United States.

The interview was the latest breach of diplomatic protocol by Trump, whose predecessors tended to avoid criticizing their foreign hosts. Trump has been traveling by helicopter to avoid the protests in central London. Police worked overtime, their days off canceled.

Trump acknowledged feeling unwelcome in the city, and blamed that in part on Mayor Sadiq Khan, who gave protesters permission to fly the baby Trump balloon. Trump also blamed recent terrorist attacks there on Khan, who is Muslim. The president claimed Europe is “losing its culture” because of immigration from the Middle East and Africa.

“Allowing the immigration to take place in Europe is a sham,” he said. “I think it changed the fabric of Europe and, unless you act very quickly, it’s never going to be what it was and I don’t mean that in a positive way.”

Khan, whose grandparents hailed from Pakistan, responded by questioning why Trump repeatedly chose him to criticize.

“Paris, Nice, Brussels, Berlin. Cities in America all suffered terror attacks,” Khan told British broadcaster Sky News. “And it’s for President Trump to explain why he singled me as the mayor of London out and not the mayors of other cities and leaders of other cities.”

In contrast to the president’s sharp words, Trump’s first event in England was an oasis of warm greetings at an evening reception Thursday at Blenheim Palace, birthplace of Winston Churchill, the larger-than-life British leader cited by the president as a model of leadership.

Trump was greeted at the palace by May, whose government has been rocked by resignations from ongoing tumult over Brexit. As for Johnson, who was recently deposed, Trump said: “I think he would be a great prime minister. I think he’s got what it takes.” He added, “I think he is a great representative for your country.”

The mood was far less jovial in Belgium earlier in the day.

During his 28 hours there, Trump disparaged longtime NATO allies, cast doubt on his commitment to the mutual-defense organization and sent the 29-member pact into a frenzied emergency session. He declared that the alliance was a “fine-tuned machine” that had acceded to his demands to speed up increases in military spending to relieve pressure on the U.S. budget. But there was little evidence they had bowed to his wishes on that front.