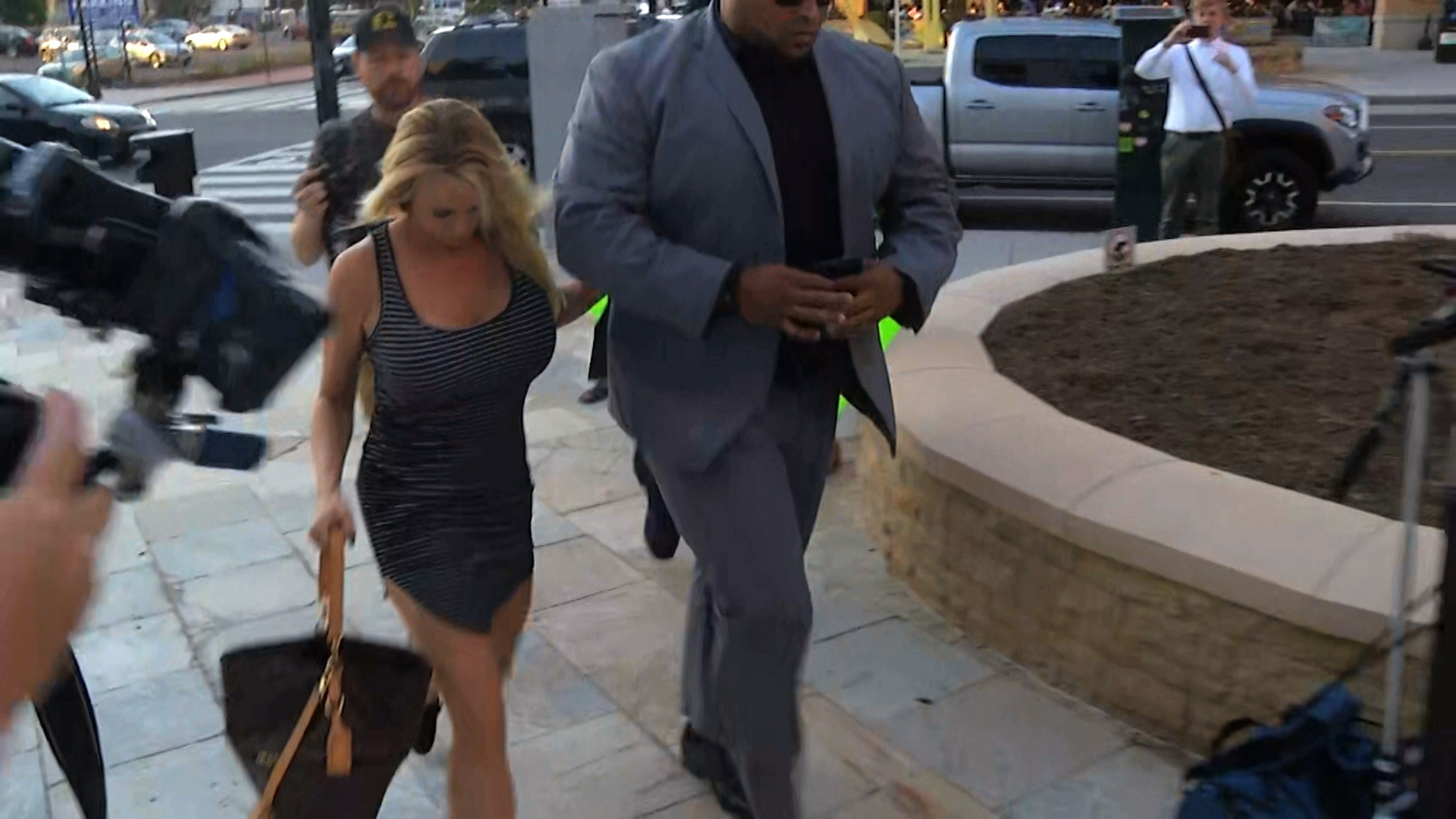 WASHINGTON — As President Donald Trump exercised his power by nominating Brett Kavanaugh Monday night at the White House, adult film star Stormy Daniels exercised hers about a mile away, wearing nothing but black heels.
“She is the one person who could take down Donald Trump,” said Diana Lautenberger, 34, who said she works for a nonprofit group.
“We’re here to support her,” said Jim Simpson, 66, chuckling. “She needs money.”

Dollar bills, some real and some fake, rained down on Daniels as she danced around the stage of the Cloakroom, a strip club whose grand opening she headlined Monday night. And yes, at roughly the same time Trump was doing his reveal, Daniels was taking it all off — the pink dress, the gloves, the bracelets and the feathered boa — to songs like “Big Spender” and “Material Girl.”
“All Things Revealed,” as the 15-minute show is called, is apparently a case of epic timing. Deliberately or not, it’s the latest chapter in Daniels’ remarkable ability to shadow Trump’s presidency.
“The stars aligned,” said Cloakroom co-owner Andre DeMoya, who said he first reached out to Daniels’ agent, and she accepted. The date had been moved at least once.
Daniels, whose real name is Stephanie Clifford, has said she had sex with Trump in 2006 when he was married, which Trump has denied. She’s suing Trump and his former longtime personal lawyer and fixer Michael Cohen and seeking to invalidate a nondisclosure agreement that she signed days before the 2016 presidential election.
It was unclear how much money the club and Daniels were earning from the event, which charged $50 and up per seat. The venue, DeMoya said, can seat a couple hundred people, but it was not nearly full on Monday night. A group of nine female bartenders and servers dressed in black bras, bikini bottoms and boots who took photos out front before the show smiled for the cameras and said, “11K!” — the amount of money, one said later, that some of the staff were hoping to make and share.
But Daniels was the star draw, even for the other female dancers.
“I am so stoked to see her,” said one performer, Renee, 25, wearing a long red dress and 7-inch heels, adding that she’s impressed that Daniels is standing up for herself and children separated from their parents at the U.S. border with Mexico. “I think she’s awesome.”

Daniels, 39, did not pole dance as other performers did during more than two hours of opening acts. Instead, she emerged in a pinkish-red strapless dress with a silver bow in back, gloves and glittery bracelets, her blonde hair cascading down her back. She circled the room, pushing her breasts into some peoples’ faces, then took the stage.
She flung a glove to one audience member, then slid a bracelet across the stage floor to another. Soon, the dress came off and she was down to just the feathery boa. Then that was gone, too. And the only things still covered were her feet, in black dancer’s shoes rather than massive platforms worn by other performers.
Daniels danced on the floor at one end of the stage, then the other, accepting dollar bills in a garter or between her breasts. And still, dollar bills cascaded down from the balcony. At one point, she got a bouncer’s attention and pointed to all the paper on the stage — a safety hazard, perhaps? — asking him to sweep it up. He did and Daniels moved on.
Then, she was gone, or so it appeared. Soon, Daniels was back in the lobby — in a black halter dress — to sell merchandise and take pictures with supporters.
Keith Swann paid his $20 and strode past the wristbands, bottle openers and #TeamStormy T-shirts, right up to Stormy Daniels’ side.
“I wanted to meet the lady who has a lawsuit against the president,” Swann told the adult film actress who had just bared it all during a 15-minute striptease.
“That would be me,” replied Daniels, raising one hand, before turning to the next person in line.