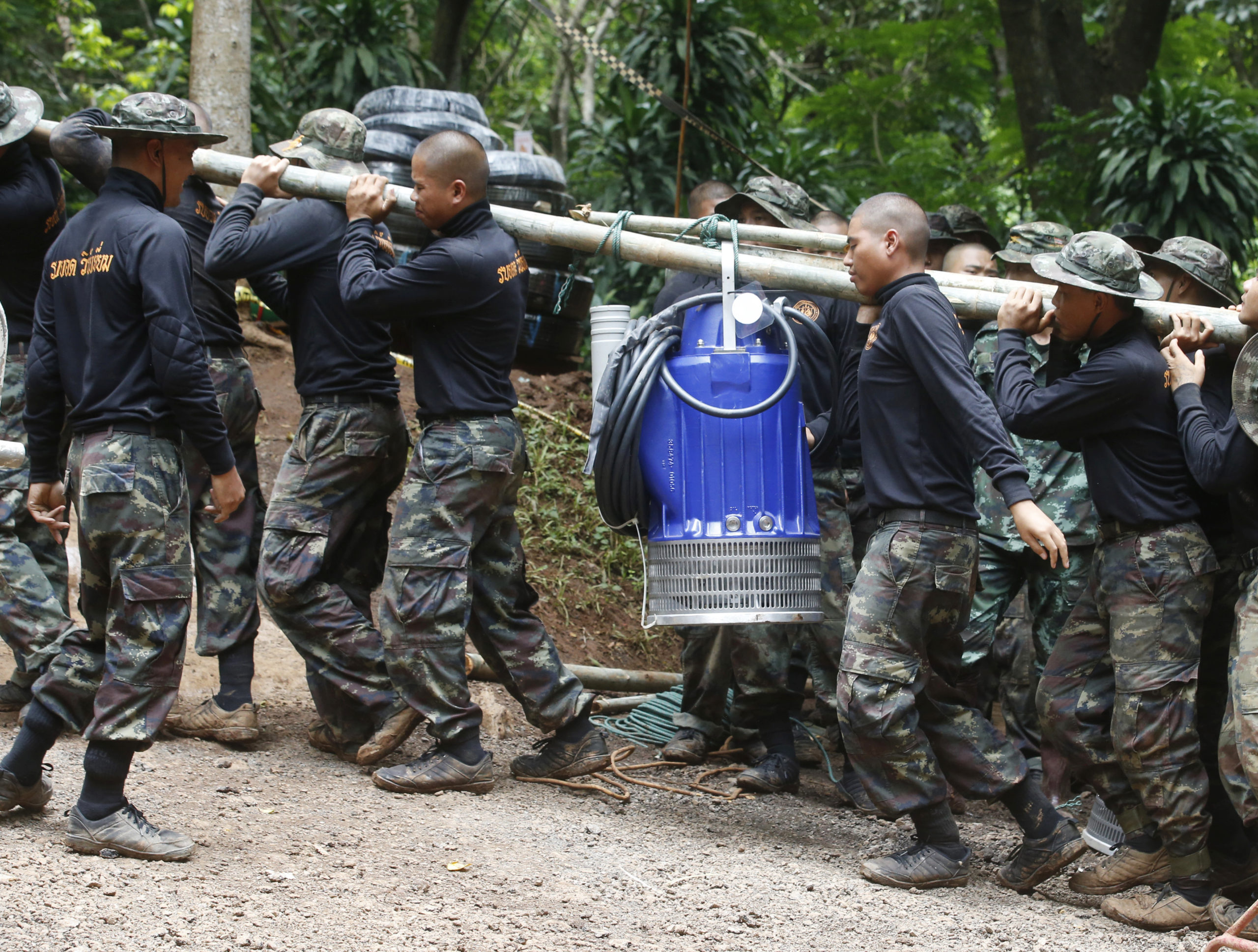 MAE SAI, Thailand — The rescuers trying to help a youth soccer team stranded in a Thai cave suffered a disheartening loss Friday with the death of a former SEAL diving in the flooded passageways to deliver supplies, as authorities raced against worsening weather and lessening oxygen where the 12 boys and their coach have been trapped for two weeks.
“We can no longer wait for all conditions (to be ready) because circumstances are pressuring us,” Thai SEAL commander Rear Adm. Arpakorn Yookongkaew told a news conference. “We originally thought the boys can stay safe inside the cave for quite some time, but circumstances have changed. We have limited amount of time.”
Oxygen levels are decreasing because of the number of workers inside the cave. Workers were trying to run an oxygen line into the chambers in addition to the oxygen canisters used by divers, Chiang Rai province Gov. Narongsak Osatanakorn said late Thursday.
A senior army commander, Maj. Gen. Chalongchai Chaiyakam, said the most pressing mission is the oxygen line. It is tied to a telephone line to provide a channel of communication for the kids, who are stuck deep in the complex but are being looked after by four SEALs, including a medic.
The boys, aged 11-16, and their 25-year-old coach went exploring in the cave after a soccer game June 23. Monsoon flooding cut off their escape and prevented rescuers from finding them for almost 10 days as the only way to reach them was by navigating dark and tight passageways filled with muddy water and strong currents.

The effort has also brought international assistance including U.S. military personnel and the British cave-divers who first found the boys Monday.
The latest was Elon Musk, the entrepreneur behind the Tesla automobile and the SpaceX rocket company, who said he would send engineers to help. One of his enterprises is Boring Co, which digs tunnels for advanced transport systems and has advanced ground-penetrating radar.
Musk also brainstormed on Twitter about possible technology for a safe evacuation, suggesting that an air tunnel constructed with soft tubing like a Bouncy Castle could provide flexible passage out.

Maybe worth trying: insert a 1m diameter nylon tube (or shorter set of tubes for most difficult sections) through cave network & inflate with air like a bouncy castle. Should create an air tunnel underwater against cave roof & auto-conform to odd shapes like the 70cm hole.

Racing To Pump Water Out Before Storms

Authorities have been racing to pump out water from the cave before more storms raise the water level again. At this time though, diving is the only possible method of escape, even though cave rescue experts warn it is extremely dangerous even for those with experience.
The death of former Thai navy SEAL Saman Gunan underscored those risks. The diver, the first fatality of the rescue effort, was working in a volunteer capacity and died during an overnight mission in which he was placing oxygen canisters along the route divers use to reach the children, Arpakorn said.
The strategically placed canisters allow divers to stay underwater for longer during what is about a five-hour trip to reach the stranded team.
While underwater, the rescuer passed out and efforts to resuscitate him failed, Arpakorn said. Some officials said his collapse was due to his oxygen supply running out, but the cause of his collapse was not confirmed.
“Despite this, we will continue until we accomplish our mission,” Arpakorn said.
The governor has said the 13 may not be extracted at the same time, depending on their condition. They boys are weak but for the most part physically healthy. They’ve practiced wearing diving masks and breathing, in preparation for the diving possibility.
Officials prefer to get the boys out as soon as possible because heavy rain is expected by Saturday. 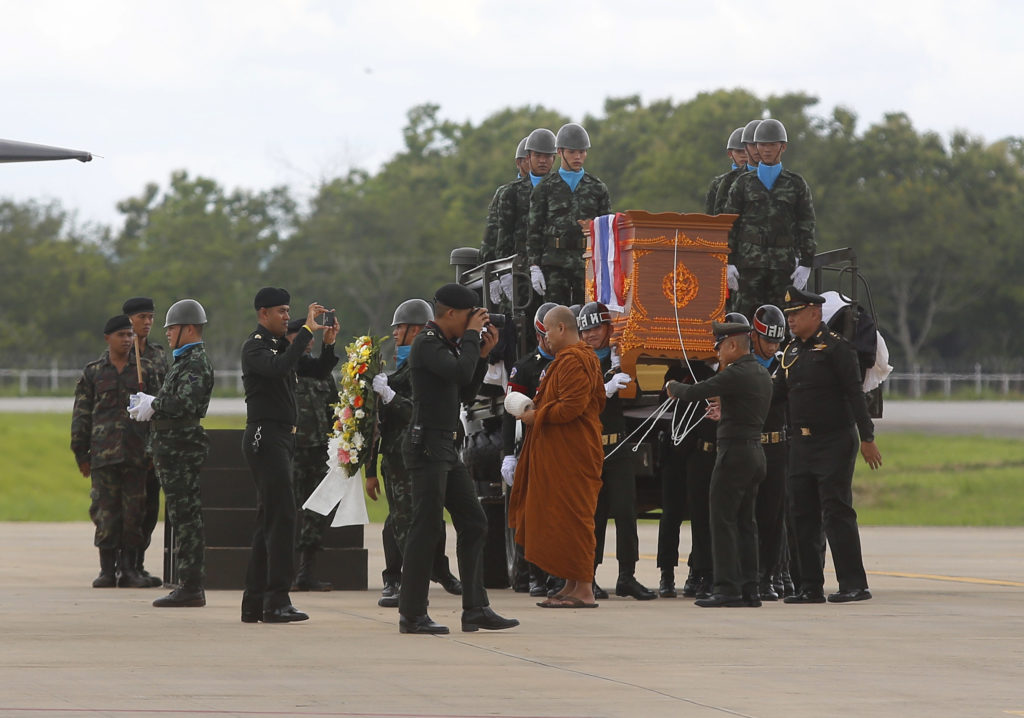 The body of Saman Gunan, a former Thai navy SEAL who died during an overnight mission, is carried during a repatriation and religious rites ceremony at Chiang Rai Airport in Mae Sai, Chiang Rai province, in northern Thailand Friday, July 6, 2018. The Thai navy diver working as part of the effort to rescue 12 boys and their soccer coach trapped in a flooded cave died Friday from lack of oxygen, underscoring risks of extracting the team. (AP Photo)

Goal Is To Drop Water Below Head Level

They are hoping an upgraded draining effort can lower the water in an area where it is still at or near the ceiling. The idea is to get some headroom so the boys would not be reliant on scuba apparatus for a long stretch and could keep their heads above water.
Cave rescue experts have said it could be safest to simply supply the boys where they are, and wait for the flooding to subside. That could take months, however, given that Thailand’s rainy season typically lasts through October. And without proper oxygen levels, staying put could also prove deadly.
The dramatic rescue efforts have garnered international attention, perhaps most notably at soccer’s most widely watched event, the World Cup, being played in Russia. A diver who spent time with the boys said earlier the youngsters wanted to know the results of the matches. Players from teams including England and Sweden have recorded good luck video messages for the trapped boys, and FIFA has invited the 13 to the World Cup final should they be rescued in time and are healthy enough to travel.