MAE SAI, Thailand — Heavy rains forecast for northern Thailand could worsen flooding in a cave where 12 boys and their soccer coach are waiting to be extracted by rescuers, possibly forcing authorities to have them swim out through a narrow, underwater passage in the cavern, a top official said Tuesday.

The 13, who disappeared when flooding trapped them in the cave they were exploring on June 23 after a soccer game, were found by rescue divers late Monday night in the cavern in northern Chiang Rai province during a desperate search. The effort drew international help and has riveted Thailand.

The boys, aged 11-16, and their 25-year-old coach were described as healthy and being looked after by seven members of the Thai navy SEALs, including medics, who were staying with them inside the cave. They were mostly in stable condition and have received high-protein drinks.

Cave Cannot Be Drained of Water

While efforts to pump out floodwaters are continuing, it’s clear that some areas of the sprawling cavern cannot be drained, said Interior Minister Anupong Paojinda, a member of Thailand’s ruling military junta. In order to get them out ahead of the bad weather forecast for later in the week, they might need to use diving gear while being guided by professional divers, he said.

Anupong said the boys would be brought out via the same complicated route through which their rescuers entered, and he conceded that if something went awry, it could be disastrous.

“Diving is not easy. For people who have never done it, it will be difficult, unlike diving in a swimming pool, because the cave’s features have small channels,” he said. “If something happens midway, it could be life-threatening.”

Video released by the Thai navy showed the boys in their soccer uniforms sitting in a dry area inside the Tham Luang Nang Non cave above the water as a light held by a rescuer was shone on their faces.

Another Option Is To Stay in Cave Up Until Water Clears

Cave rescue experts have said it could be safer to simply supply them where they are for now, rather than trying to have the boys dive out. That could take months, however, given that Thailand’s rainy season typically lasts through October.

SEAL commander Rear Adm. Arpakorn Yookongkaew said there was no rush to bring them out, since they’re safe where they are.

A doctor and a nurse were with them in the cave.

“We have given the boys food, starting from easily digested and high-powered food with enough minerals,” Arpakorn told a news conference.

Having them dive out of the cave was one of several options being considered, “but if we are using this plan, we have to be certain that it will work and have to have a drill to make sure that it’s 100 percent safe,” he said.

Chiang Rai provincial Gov. Narongsak Osatanakorn said the health of the boys and coach were checked using a field assessment in which red is critical condition, yellow is serious and green is stable.

“We found that most of the boys are in green condition,” he said. “Maybe some of the boys have injuries or light injuries and would be categorized as yellow condition. But no one is in red condition.”

Relatives Rejoiced When Boys Were Found

Relatives keeping vigil at the mouth of the cave since the ordeal began rejoiced at the news that their boys and their coach had been found.

“I want to give him a hug. I miss him very much,” said Tham Chanthawong, an aunt of the coach. “In these 10 days, how many million seconds have there been? I’ve missed him every second.” 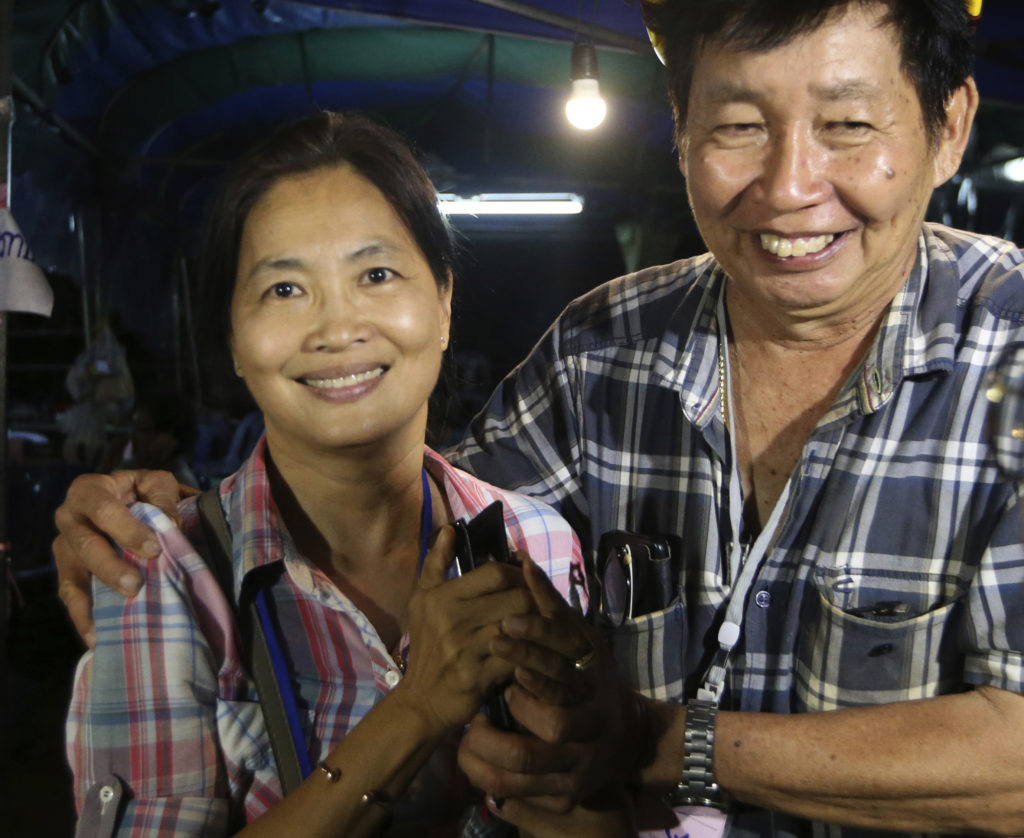 Family members smile after hearing the news that the missing 12 boys and their soccer coach have been found, in Mae Sai, Chiang Rai province, in northern Thailand, Monday, July 2, 2018. A Thai provincial governor says all 12 boys and their coach have been found alive in the cave where they went missing over a week ago in northern Thailand. (AP Photo/Sakchai Lalit)

Rescue divers had spent much of Monday making preparations for a final push to locate them, efforts that had been hampered by flooding that made it difficult to move through the tight passageways of muddy water.

A pair of expert cave divers from Britain found the group about 300-400 meters (yards) past a section of the cave on higher ground that was believed to be where they might have taken shelter.

In the 5-minute navy video, the boys were seen wearing their soccer uniforms and were calm, curious and polite. They also were keen to get some food.

After an initial exchange in which a rescuer determines that all 13 are present, one of the boys asked what day it was, and a rescuer replied: “Monday. Monday. You have been here — 10 days.”

The rescuer told them “you are very strong.” The traditional reserve of Thai children toward adults broke slightly after a while, and one boy told another in Thai, “Tell them we are hungry.”

A rescuer assured them that “navy SEALs will come tomorrow, with food and doctors and everything.” At the end of the video, a boy asked in English, “Where do you come from?” The rescue diver replied, “England, UK.”

Besides the protein drink, Narongsak said they were given painkillers and antibiotics, which doctors had advised as a precaution.

He said officials had met and agreed on the need to “ensure 100 percent safety for the boys when we bring them out.”

“We worked so hard to find them and we will not lose them,” he said.

Cave diver Ben Reymenants, part of the team assisting the rescue effort, told NBC’s “Today” show that he was “very surprised obviously that they are all alive and actually mentally also healthy.”

While they appear responsive, “they are very weak and very skinny,” he added.

Reymenants said the easiest option would be to “keep pumping the water out of the cave. They need another 3 or 4 feet so they can literally float them out with life jackets.”

“But time is not on their side,” he noted, because of the heavy rain forecast.

He added that two Thai navy doctors have volunteered to stay with them for months, if needed.

The British Cave Rescue Council, which has members taking part in the operation, said in a statement that “although water levels have dropped, the diving conditions remain difficult and any attempt to dive the boys and their coach out will not be taken lightly because there are significant technical challenges and risks to consider.”

Joining the British are other experts from around the world and teams from the U.S., Australia, China and elsewhere.

Authorities said efforts would continue outside the cave, where teams have been scouring the mountainside for other entrances to the caverns. Several fissures have been found and teams have explored some, although so far, none lead to the trapped boys.