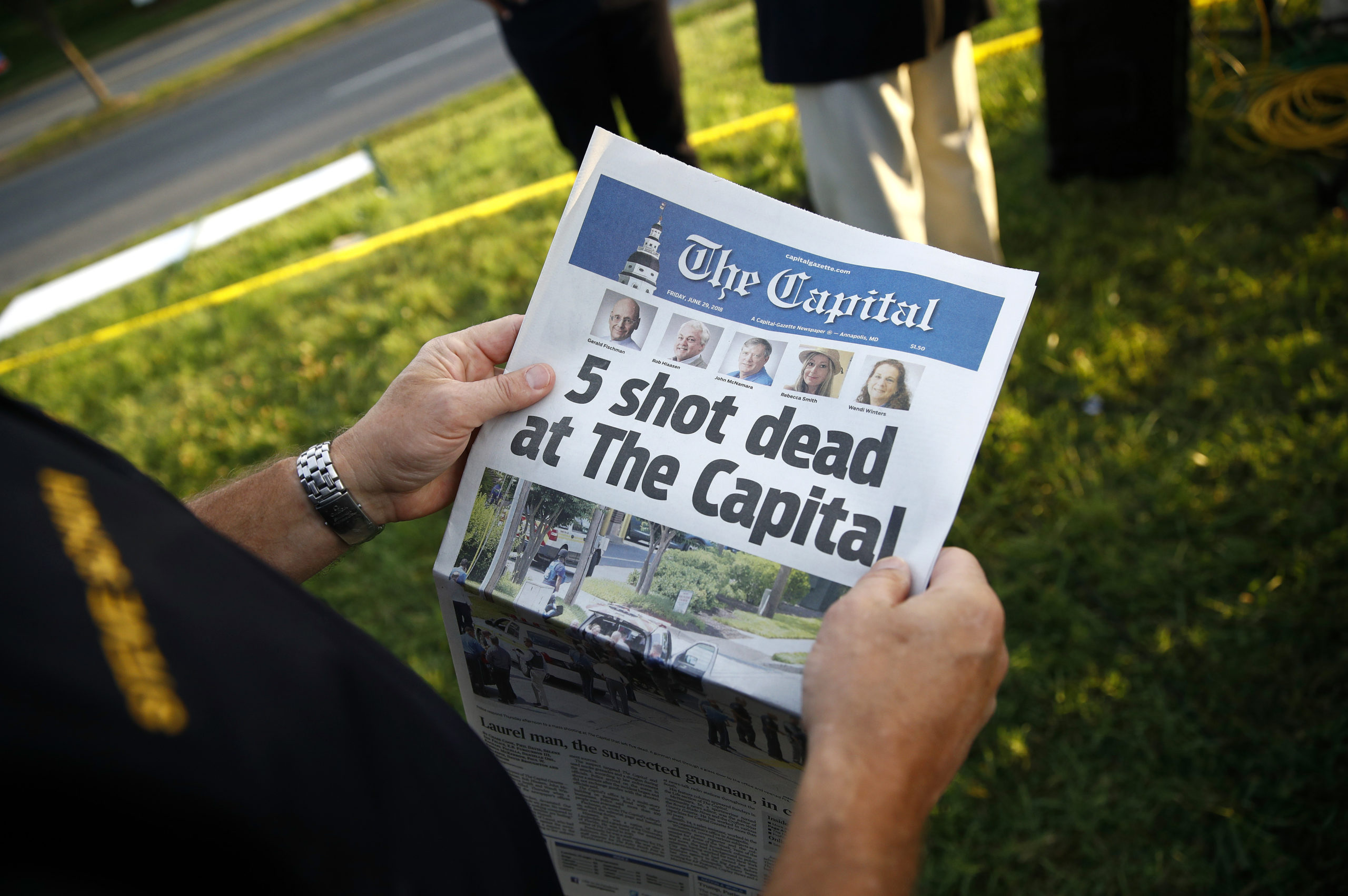 A man who police say opened fire at a Maryland newspaper office Thursday, killing five and injuring two others, had a long, acrimonious history with the newspaper, including a lawsuit and years of harassment of its journalists on Twitter.
Jarrod Warren Ramos, swiftly arrested by police after the attack, was charged Friday with five counts of first-degree murder.
Acting Police Chief William Krampf of Anne Arundel County said the gunman “looked for his victims” Thursday in the newsroom of The Capital Gazette in Annapolis. “This person was prepared today to come in, this person was prepared to shoot people,” Krampf said.
Authorities say Ramos used a pump-action shotgun in the attack. Police Chief Timothy Altomare said at a news conference Friday that it is “absolutely untrue” that Ramos mutilated his fingertips.
Altomare also said that employees Rachel Pacella and Janet Cooley had been treated at a hospital and released after being injured during Thursday’s attack.

Tom Marquardt, a now-retired publisher and top editor at the paper, told The Capital Gazette on Thursday that he had long been concerned about Ramos’ history of escalating social media attacks against the newspaper and its journalists.
He called police about Ramos in 2013 and considered filing a restraining order against him.
“I was seriously concerned he would threaten us with physical violence,” Marquardt said. “I even told my wife, ‘We have to be concerned. This guy could really hurt us.’ ”
Ramos filed a failed lawsuit against the paper in 2012, alleging the newspaper, a columnist and an editor defamed him in an article about his conviction in a criminal harassment case in 2011.
According to court documents, five days after Ramos pleaded guilty to criminal harassment, the newspaper published a story describing allegations by a woman who claimed Ramos harassed her online for months.
The article said Ramos had contacted the woman on Facebook and thanked her “for being the only person ever to say, ‘Hello,’ or be nice to him in school.”
The woman told the newspaper that Ramos appeared to be having some problems, so she wrote back and tried to help, suggesting a counseling center. She said that set off months of emails in which Ramos sometimes asked for help, but other times called her vulgar names and told her to kill herself. She told The Capital that she told him to stop, but the emails continued. She said she called police and the emails stopped for months, but then started up again “nastier than ever,” the article said.
In his lawsuit, Ramos said the article contained false and defamatory statements, and injured his reputation.

This photo combination shows the victims of the shooting in the newsroom of the Capital Gazette in Annapolis, Md., on Thursday, June 28, 2018. From left, John McNamara, Wendi Winters, Rob Hiaasen, Gerald Fischman and Rebecca Smith. (The Baltimore Sun via AP)

A judge dismissed the suit after asking Ramos to point out a single statement in the article that was false or to give a single example of how it had harmed him. “He could not do so,” an appeals court wrote in upholding the dismissal.
In the article, Ramos was described as a tall, thin man with long hair worn in a ponytail. His lawyer told the newspaper that Ramos has a degree in computer engineering and had worked for the U.S. Bureau of Labor Statistics for six years. His lawyer also said Ramos had no previous criminal record.
Ramos took to Twitter, where he routinely harassed journalists from the newspaper in scores of profanity laced tweets. One of those tweets targeted one of the journalists killed Thursday, Rob Hiaasen. In another tweet, he discussed how he’d enjoy seeing the paper stop publishing, but “it would be nicer” to see two journalists “cease breathing.” 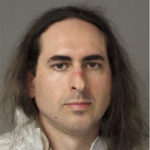 Online court records in Maryland show that three peace orders were taken out against Ramos — one each in 2011, 2012 and 2013. A judge can issue such protection, ordering someone to stay away from someone else and to avoid contacting them. In at least two instances, Ramos appealed the orders. It wasn’t clear whom the cases involved or what the ultimate outcomes were.
Then, in 2013, Ramos sued Anne Arundel County District Judge John McKenna. Online court records did not indicate the nature or result of that suit.
Ramos filed another lawsuit in 2014 against three defendants. A judge in Prince George’s dismissed that case two years later when Ramos failed to show up for court.

Police say surveillance video recorded the attack, which began with a shotgun blast that shattered the glass entrance of the open newsroom. Journalists crawled under desks and sought other hiding places, describing agonizing minutes of terror as they heard his footsteps and the repeated blasts of the weapon.
Officers responded in about 60 seconds and arrested him without firing a shot as he too “attempted to conceal himself under a desk,” according to his charging documents. They recovered a “long gun firearm” and said he also carried smoke grenades.