It’s a crazy scenario, but in an election as close as Fresno City Council District 3, it may just happen. What if two or more candidates tie in a primary? Who advances to the general election?

With only 14 votes separating three candidates for second place for the council seat, it is not necessarily a longshot scenario.

“There’s not much to do until we have a better number. What we have right now isn’t even close to accurate. What we know today isn’t really worth worrying about.” — District 3 candidate Craig Scharton

Preliminary results show Miguel Arias in first place with 30% of the vote, 445 votes ahead of second-place Daren Miller.

But second place is where the candidates bunch up. Miller, Tate Hill and Craig Scharton all finished in the 14% range.

County Clerk Brandi Orth will update results Friday at 3 p.m. That should in theory show some more separation among Miller (420 votes), Hill (411), and Scharton (406). Although there are still tens of thousands of ballots outstanding countywide, Orth could not break down how many remain for District 3. 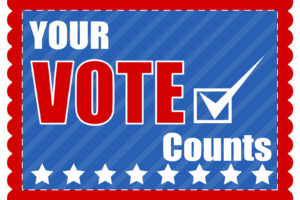 A majority vote total, which apparently won’t happen, is needed to win the election outright. In absence of that, the top two advance to the general election.

Unless there is a flat-footed tie for second place.

According to state election law, if the final results show a tie for second place, then the knotted candidates advance to the general election.  That means Arias could face, one, two or even three competitors in November.

The three candidates so close together are waiting things out until the next update.

“There’s not much to do until we have a better number,” Scharton said. “What we have right now isn’t even close to accurate. What we know today isn’t really worth worrying about.”

“Like everyone else, I’m waiting for the absentee numbers to come out,” said an optimistic Hill. “We’ll have a positive outcome with the absentee count.”

Said Miller: “I’m confident but anxious. We put in the work, our due diligence in meeting with people. We were successful in implementing our political plan.”

July 5 is the last day to certify election results.