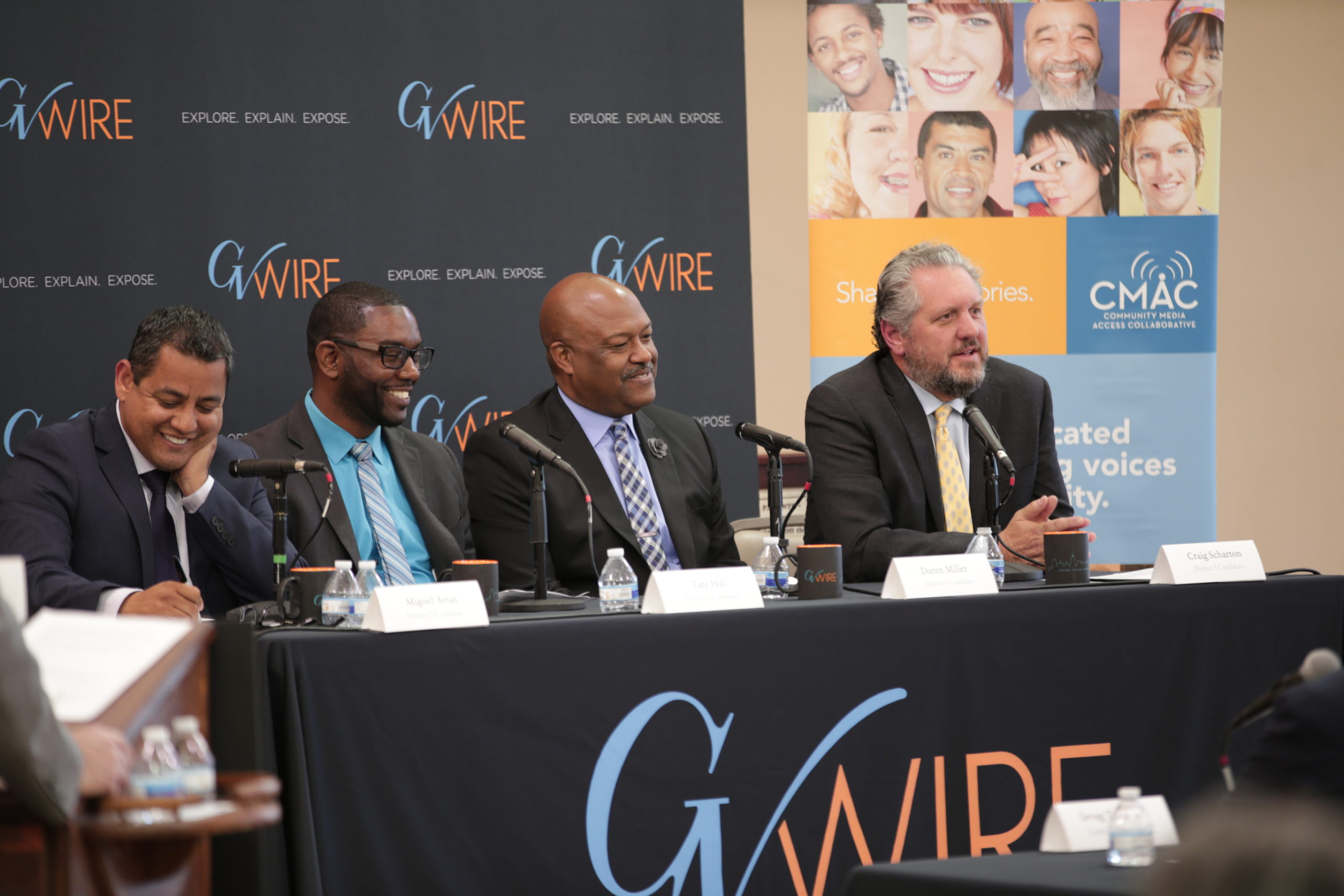 GV Wire, in conjunction with CMAC and Fresno’s Young Leading Professionals, held the 90-minute forum in the district at the Westside Church of God.

The panel consisted of this reporter, Genevieve Hinojos-Spalding of FLYP, and Sevag Tatetosian, whose interview show “Central Valley Ledger” appears on CMAC.

Regarding whether the city should fund legal services for undocumented citizens, Arias said “absolutely,” but he would prefer to partner with private foundations.

Hill said this was a role for the federal government. The city “is not best situated to provide those services. It also opens a Pandora’s Box,” Hill said.

Miller endorsed the idea of providing city funds to protect the undocumented.

Scharton said he was undecided. He would defer to the community to see if this was a spending priority.

All four candidates endorsed a potential parks sales tax that proponents are gathering signatures to place on the November ballot.

Another aspect candidates agreed upon was the need for more resources for parks, recreation and public safety.

When asked if he supports the city council’s vote on the Caglia industrial park in south Fresno, Scharton said the city should focus on growing existing businesses and encouraging start-ups instead. He mentioned the establishment of the Fresno Food Expo to showcase local businesses as an example.

Arias said businesses like Amazon and Ulta should be required to hire locally, especially if they take local money.

Candidates for the open District 7 council seat will face off on Tuesday, May 1 at 6 p.m. in a forum at the Islamic Cultural Center of Fresno. Nelson Esparza, Veva Islas and Brian Whelan are all scheduled to participate.

Hill said the city and businesses should work together to address the needs of the community. “Businesses have an obligation to make the residents whole. I believe that is something that can be done,” he said.

Miller said he doesn’t support businesses at the expense of communities. He said that Ulta, Amazon and the Caglia industrial park should not have been approved in an area near a school.

When asked what he would cut from the budget, Scharton didn’t offer specific items. Rather, he said he would request monthly financial reports and make five-year budget cycles.

Arias cited the city’s 27 attorneys and the recent purchase of military equipment for the police department. He would start cutting there.

Hill said the city should invest more in city neighborhoods in terms of infrastructure and public safety.

Miller wondered if some departments could be merged. He also called for less out-of-town travel.

Miller said the city should regulate marijuana similarly to alcohol. He also said the federal government needs to reclassify marijuana so it is no longer a banned substance.

Hill was concerned about where marijuana dispensaries would be located. He doesn’t want them concentrated in a particular part of town.

Arias said the city would determine winners and losers. If the city treats marijuana like alcohol, it would wind up concentrated in the same places. He also said people with prior drug convictions should have an opportunity for marijuana business licenses. And, he wants marijuana tax proceeds spent in the neighborhoods where the drug is sold.

Scharton wants to focus on quality, not quantity. His example was a liquor store with nice landscaping and carrying locally produced selections of beer and wine.

“We have a long way to go,” Scharton said on the state of race relations in Fresno. “If you look at Fresno as a whole, we look very diverse. But, we’re very segregated by census tracts.”

Said Arias: “It exists. And it’s deep. We are one shooting, caught on video, away from this city quickly going on fire.”

“Until we have a real mindset to address these challenges,” Hill said, “we will continue to see racism. One of the things is encouraging, is that we have people within our city want to make changes. We just to have to have the courage, and I would be one of those, to make that change.”

“Although Fresno does not have a good history on racial relations, there are signs on the horizon,” Miller said. “I am hopeful and optimistic that Fresno will go through a metamorphosis.”

Three other candidates are in the District 3 race: Kimberly Tapscott-Munson, Sean Sanchez and Larry Burrus. They were not invited to participate in the forum because their campaigns did not meet a qualifying fundraising threshold.

Candidates for the open District 7 council seat will face off on Tuesday, May 1 at 6 p.m. in a forum being held at the Islamic Cultural Center of Fresno (2111 E Nees Ave.). Candidates Nelson Esparza, Veva Islas and Brian Whelan are all scheduled to participate. The three are seeking to replace termed-out Councilman Clint Olivier.

In both races, if a candidate receives more than 50% of the vote, they will win the election to succeed Oliver Baines, who is termed out.

If not, the top two finishers move on to the November general election.

Watch the entire District 3 forum below:

Is It Possible To Control Your Dreams?

Is Temperance Flat Dam Proposal Down to Its Last Strike?