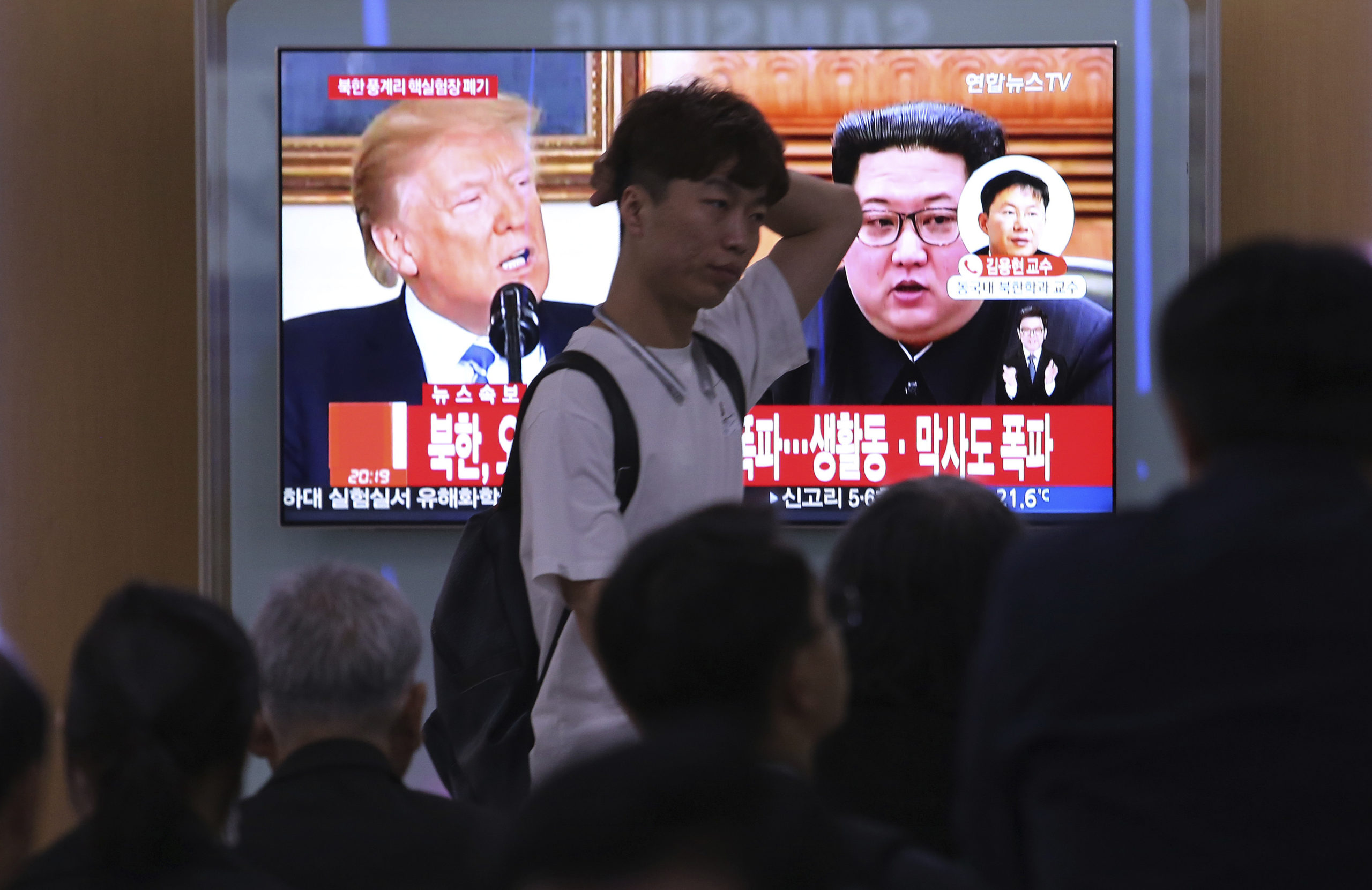 WASHINGTON — In a dramatic diplomatic turn, President Donald Trump on Thursday called off next month’s summit with North Korea’s Kim Jong Un, calling the cancellation a “tremendous setback” for peace and stressing that the US military was ready to respond to any “foolish or reckless acts” by the North.
Trump first announced his decision in a letter to Kim released by the White House, in which he cited “tremendous anger and open hostility” in a recent statement by the North, adding that it was “inappropriate, at this time, to have this long-planned meeting.” 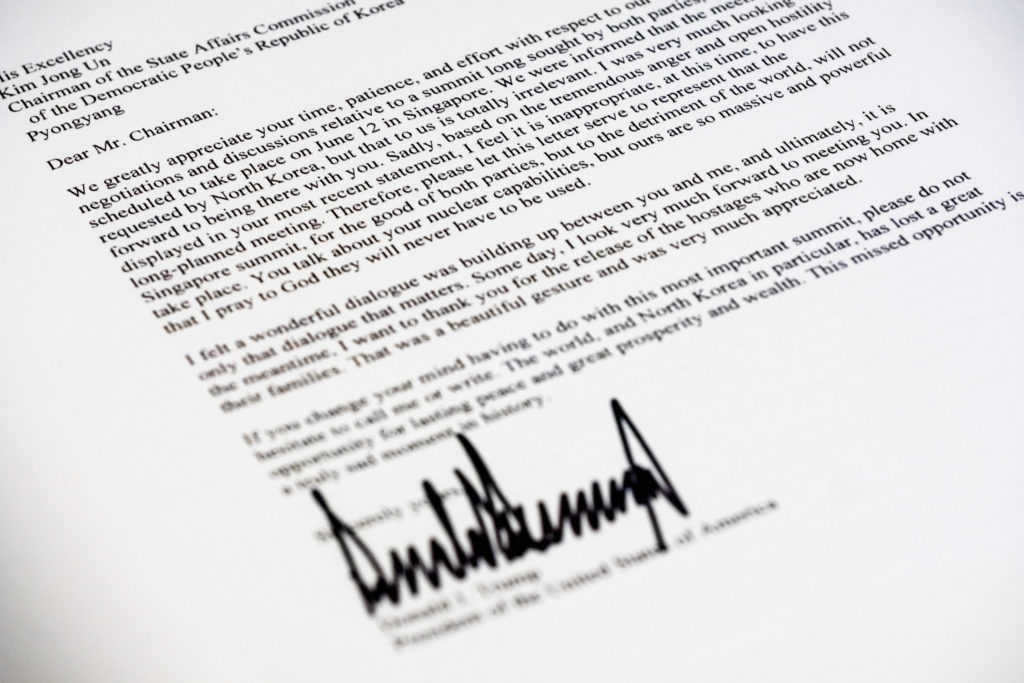 A copy of the letter sent to North Korean leader Kim Jong Un from President Donald Trump canceling their planned summit in Singapore is photographed in Washington, Thursday, May 24, 2018. (AP Photo/J. David Ake)

Speaking at the White House later, Trump said a “maximum pressure campaign” will continue against North Korea and that he was “waiting” should Kim choose to engage in “constructive” actions.
He added that it was “possible that the existing summit could take place or a summit at some later date.”
The abrupt cancellation of the June 12 meeting withdraws the U.S. for now from an unprecedented summit that offered the prospect of a historic nuclear peace treaty or an epic diplomatic failure. No sitting American president has ever met with a North Korea leader.

In the North Korean statement that Trump cited, a top Foreign Ministry official referred to Vice President Mike Pence as a “political dummy” for his comments on the North and said it was up to the U.S. whether they will “meet us at a meeting room or encounter us at nuclear-to-nuclear showdown.”
Trump said the world was losing a “great opportunity for lasting peace and great prosperity and wealth.”
But he left the door open to the chance that the summit could yet be rescheduled: “If you change your mind having to do with this most important summit, please do not hesitate to call me or write.”
One U.S. official said the decision to call off the summit was made Thursday morning in response to the statement disparaging Pence and threatening nuclear war. A White House official said it was incorrect to focus solely on the “dummy” comment, saying that the nuclear threats meant that no summit could be successful under such circumstances. The officials spoke on condition of anonymity to discuss internal deliberations.
Secretary of State Mike Pompeo, testifying on Capitol Hill, said North Korea had not responded to repeated requests from U.S. officials to discuss logistics for the summit. He told the Senate Foreign Relations Committee the lack of responses was an additional reason for Trump’s decision.

Pompeo said the North’s attitude had changed markedly since he returned from a trip to Pyongyang earlier this month during which he met with Kim and oversaw the release of three Americans being held there.
South Korean President Moon Jae-in played a major role in planning for the summit and sought to keep it on the rails in a visit to the White House this week. His office said Thursday that it was trying to figure out Trump’s intentions in canceling the summit. 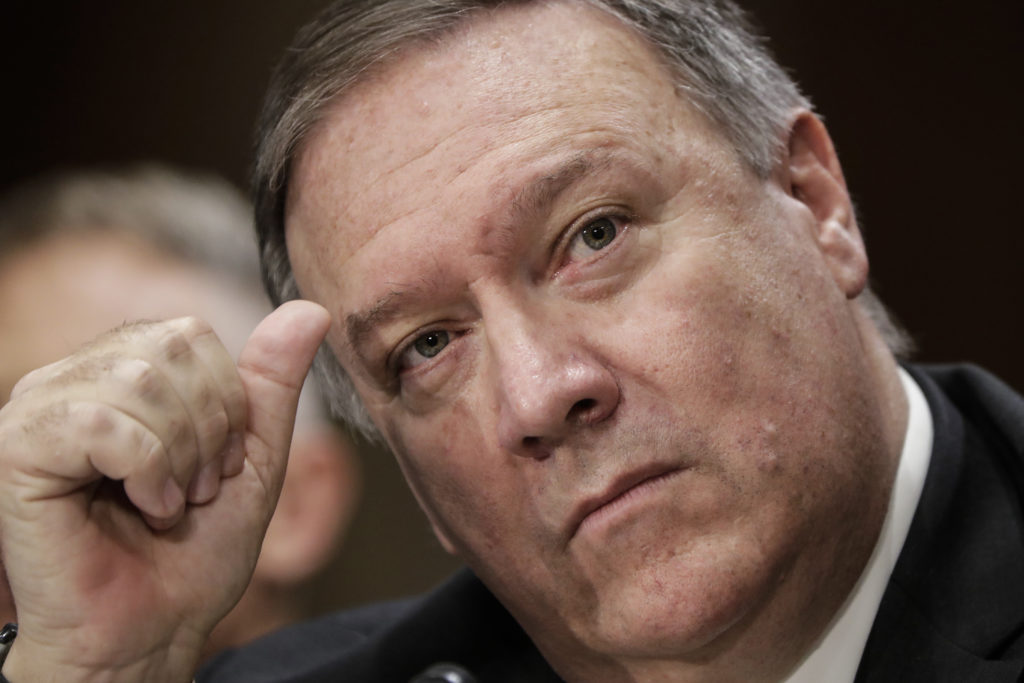 Pompeo, asked about a report that the South had not been informed before the president’s letter was made public, said simply, “We are locked into the Republic of Korea. We are in lockstep with them.”
The cancellation came shortly after Kim made good on his promise to demolish his country’s nuclear test site, which was formally closed in a series of huge explosions Thursday as a group of foreign journalists looked on. The explosions at the test site deep in the mountains of the North’s sparsely populated northeast were supposed to build confidence ahead of the summit. However, the closing of the site is not an irreversible move and would need to be followed by many more significant measures to meet the demand for real denuclearization.
The president had agreed to the historic sit-down in March after months of trading insults and nuclear threats with the North Korean leader. But after criticism from North Korea, Trump cast doubt this week on whether the meeting would happen.

White House officials have privately predicted for weeks that the summit could be canceled once or twice before actually taking place, owing to the hard-nosed style of the two leaders. Trump has seemed to welcome chatter of a Nobel Peace Prize, but that has yielded in recent weeks to the sobering prospect of ensuring a successful outcome with the Kim.
Trump’s allies in Congress applauded the president, saying he was justified in pulling out of the meeting.
“North Korea has a long history of demanding concessions merely to negotiate. While past administrations of both parties have fallen for this ruse, I commend the president for seeing through Kim Jong Un’s fraud,” said Sen. Tom Cotton, R-Ark.
Critics were less impressed.
Rep. Eliot Engel, D-N.Y., top Democrat on the Foreign Affairs Committee, called the development “another embarrassment for the country.” He added, “This is not ding dong school. It’s serious.”

Villaraigosa Advisor: Newsom Is Promoting Cox Because We Can Beat Him in November