Teachers in states across the country have walked out of classrooms in recent months to draw attention to low wages and a lack of support from lawmakers — and by extension, the voting public.

In his May 18 commentary, Washington Post columnist Fareed Zakaria says the teaching profession has become a thankless job, swept up as part of a 30-year assault on “government, bureaucrats and the public sector in general.”

“We have all heard about stagnant middle-class wages,” Zakaria says.  “But the average pay for a teacher in the United States, adjusted for inflation, has actually declined over the past 15 years, while their health-care costs have risen substantially.” 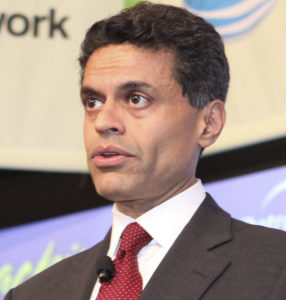 “In the United States, when we encounter a member of the armed services, many of us make a point to thank them for their service. When was the last time you did the same for a public school teacher?” — Fareed Zakaria

One result of this trend, he reports, is a steep drop in the number of Americans who are choosing to pursue careers in education.  “In fact, the New York Times reports it is so hard for public schools to find qualified Americans that many districts are starting to recruit instructors from low-wage countries such as the Philippines,” Zakaria writes.

California school districts have been recruited teachers from Mexico for several years.

In 2016, a Fresno Unified administrator told The Fresno Bee that “We’ve recruited from the dog park, from The Cheesecake Factory and Starbucks. Wherever we go, we recruit constantly.”

It’s not only wages, he says, but also declining respect for the profession. “In the United States, when we encounter a member of the armed services, many of us make a point to thank them for their service,” says Zakaria.  “When was the last time you did the same for a public school teacher?”